Remembrance of Travails and Tribulations 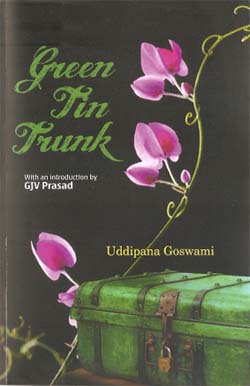 North East has been one of the troubled regions strife-torn and ill-fed. The reasons are many, not merely political, governance related. They are economic or societal levels. Poverty and uncontrolled population growth are the roots of all evil found in abundance there. The land, the rivers and the locale make humans there become devoid of human thinking, goodness and action.

Uddipana Goswami is one of the up and coming greats in Assam as a woman, scholar, individualist and most importantly a poet. Suffering does not always destroy the capacity to think, feel and express in all men and women. The collection of poems Green Tin Trunk is a vibrating portrayal of the human condition in the far flung North East. The renowned academic who wrote the intro called North East as the powerhouse of Indian English Poetry and he is right and just. This poet herself in her authorial statement went on record saying: ‘I revisit this narrative in the last few years of my life (and of this anthology). It has been a short but intense period of pain and personal growth and has led, among other things, to a re-evaluation of who really I am, what my identity is.’ (p12)

Pain and suffering, physical and mental, sometimes are spring boards for intellectual growth. The poems reveal the tribulations and turmoil not merely at the personal level but also at the societal level also. Living amidst the horror of all these, holding life in one’s own fist – as our regional language idiom says – makes sensitive minds think deep and express things with clarity and, some times, vituperative vehemence.

In his intro to this sad, harrowing and captivating book of poems GJV Prasad wrote ‘It is of course interesting to note that the poet explains an Assamese (Axamiya) reference in terms of Western mythology (Pokhiraj as Pegasus) but that is the occasional collateral damage of English studies!’ If it is meant to be a joke it does not make any one laugh. Indian English poets in our country had been students of English literature. What is more, they have been lovers of English poetry with a good understanding of Greek and Roman mythology and literature of the ancient times too. What is called collateral ‘damage’ can justly be called ‘enriching’ World English too collaterally. Our bhasha poets drew and continue to draw from our Sanskrit literature as our poets writing in English draw from English poetry, and translations of poetry written in Western languages and their mythologies.

The very first poem ‘This tree is all mine’, shows promise. Figuratively the tree is the poet’s land. The ‘myness’ makes her look ahead.

When it starts withering
When the few leaves it has left
Start falling, leaving it bare
I might want it back then
To watch it die
To feel its pain, holding
Its prickly branches
Against my breast. (pp.22-23)

‘Moon and night scenes’ is an intensely personal experience:

It is the same moon we saw that day driving back together.
We couldn’t touch then despite our nearness
We cannot touch now because of our distance
That makes the jealous moon happy. (p24)

‘Terminus’ is about telephonic conversation which cannot be fully satisfying. And the poem ends thus:

‘We have limbs, trunks, groins, tongues
Hearts, heads, emotions, drvies.
How do we live if we don’t touch?’

‘Tonight, I’m Lady Macbeth’ describes the aftermath of the murder of the moon. The anguish of the killer is remembered fully and we have to imagine why the murder was committed.

The murder, the gory corpse and the worry of not being able to wash the sin suggests a harrowing experience. The feeling is communicated with the power of brevity.

‘EvenAfter’ is about love described in an old tale when Pokhiraj is the Pegasus, the winged stallion of Assamese mythology. The oblique reference is to a lover who took his damsel - a remembrance. A sad thing still unforgotten

Not a prince but him
Not EverAfter but so long. (p.29)

The strife-torn and turbulence-shaken condition of the region of the South East makes the speaker of the poem ‘Sinner, Saviour, soldier’ wonder who she is of the three. Obviously there is no answer to this.

‘From Exile’ written in two parts is about the feeling of alienation, of a sense of non-belonging and hence a purgatory. Fecklessness of relationship causes intense pain and produces rancour too at times.

You may dream of relationships here
But you can only have
Make-shift relationships
….
You see,
Motherhood also, for her,
Is make-shift. (p32-33)

But tragedy it is that the woman cannot get away once she is a mother and it remains a purgatory with shattered feelings. There are powerful poems of jilted, discarded loves. ‘The poet in morgue’, ‘Cigarette smoking’ and ‘After this sky’ have allusions to unhappy unions where the warmth of a touch, a kiss and then coition suddenly vanish into suffocating smoke. This leads to deep disgust:

For jack-in-the box love
that jumps to life
and fades away
while you join
a voyeuristic street lamp
in watching yourself make love
For no doubt you know
there’s nowhere to go
after this sky. ‘After this sky’ (p.37)

Metaphors and tropes are extremely poignant and suggestive in Uddipana’s poems. In the poem ‘elegiac’ the people around are described as emasculate, leaden, forgotten, wounded, concrete phallus, green mucous, grey peacock and sky’s venom.

‘Bohag’ is not merely a season’ it is a whimper. ‘…bullet. blood and death, death, blood and bullet: that is all there is.’ That is all we know and need to know. Flowers draw tears and rivers would take away lives. This is existence and no more raison d’ etre. ‘In ‘Stanzaic’ the names of rivers are lovely but the speaker says, ‘I could only drown in them.’

There are story poems: ‘Dhodhar Ali’ and ‘Manufacturing memories’. The poet (professionally a teacher) gives requisite notes at the end of the poems to help readers. References to Beethoven, Beckett, Hemingway, Gaugin, Michelangelo attract the lovers of Western art sensibility. Gibes too are interesting: Dick’s dick is too short. There is folk lore too. ‘Timunny Sahab’ is a tale which is lingers long in our memory.

Any Assamese writing must bring in Kamkahya, the Mother Goddess. The horror of blood shed and blood - even goat blood, pigeon blood and bull-blood – all are there. The goddess is nauseating to the speaker of the poem and the belief may be horrid.

And once a year, she menstruates.
A great event: the only time her devotees
Consider menstrual blood sacred.
(You cannot worship a vagina
And expect it will not menstruate.) (p.55)

The goddess may create nightmares too. The blood loving and blood demanding goddess is tribal imagination.

The second part Personal/Political has fifteen poems. ‘Guwahati’ is personal. The speaker feels that Guwahati is inured, may be shedding tears, or, may be the memory of a children’s game. There are very interesting tales. There is a tale of the past of the killing of ugly sisters. Another poem is about the Assamese icon Bishnu Rabha. There is the tale of the river Brahmaputra, the Red River called Luit (Lohit).

Uddipanas’s poetic manifesto can be seen in the poem ‘Would I be a poet still?’ She is perfectly right in the peroration.

Would I be a poet still
If I wrote instead the cacophony
Of insurgent cross-fires
And false encounters, secret killings?

Will you consider it poetry
If it were splashed with mud from military boots
Mixed with the blood od revolutionaries and mercenaries
And political touts and merchants of ideology?

There were dreamers who thought poetry
Was about nation, revolution, freedom.
They were dreaming in their sleep
Their dream dies as they slept.
Poetry became lost in armed skirmishes. (p.72)

The poems ‘Love Letter’, ‘Laughing, bombing’ are about thoughtless skirmishes again, blood and death. There is anguish about some poets:

Some write stark poetry about children bombed
Or metaphoric ones about rivers of blood
Some live, some die, many cry.
And always, bombs keep making a lot of noise. (p.82)

For the serious, thinking poet horror is personal:

Yes, to me it is personal
That people who claim to be the keepers
Of my nation, my people and the revolution
Killed them all. (p.83)

Terror and horror mark the individuality even of the rivers in Assam. They are RED. There is a poem about a river named Rangi, now no longer extant. Identity is important for a person and the agonized speaker of the poem ‘Tell me who I should be?’

Can the ethnic reconciliation
Lie through the stomach and in the taste buds?
….
My forefathers would not sub-let their political holdings
Today, I am an outsider to my people, another coloniser.
Tell me who should I be?
What shall be my identity? (pp.88-89)

True, love has a way of ending
Most bathetically. (p99)

This understanding is summum bonum of existence, which is better than thinking of stupid alternatives.

Pain and disillusionment are the conditions of modern woman’s life. This is shown vividly and passionately in the poem ‘Your story, my story’

Swollen eyes, swollen lips
Broken dishes, broken ribs
Torn pictures, stained sheets
Ugly faces, ugly screams.
We hated who they made us
Romola, Komola, Bimola, Me
Didn’t we?
So one day we just smashed
All our mirrors and dashed
Our heads
Against the wall
And we swore
Never to speak again. (p106)

Amidst penury in the turmoil about ownership rose ethnic theorists.

I, inured from visiting ODP camps and reading
What experts theorists about ethnic conflicts,
By this one little river, not reddened by blood yet
And leaving behind my stressful life –
Abusive husband, broken marriage, constant harassment –
Settle down here where there seems to be no strife
(May be if I stayed here long enough, even this place could become a case study) (p.110)

The poem ‘Autobiographial’ talks about the girl with hibiscus in her hair. We are told: ‘She died of her husbands beatings.’ (p.111) ‘Feasting for the dead’ is about customs old still being adhered to. ‘When grandmothers die’ is about some change:

When grandmothers die
You cry
For your fear
For your mothers dreams
Unfulfilled. (p.115)

The feasts for the dead are not spoken of. They are not forgotten or given up.

It is tragic that the genocide at Nellie happened not under alien rule but what was proudly called self-rule.

If Nellie was the name of a woman
You would still have her blood
On your hands. (p. 117)

The poem ‘Green tin trunk’ , also the title of the book, is about the old and badly battered trunk freshly done up and painted by the smiling Ali, given to the bride for leaving the natal home to join her hubby. It could be any new bride’s requirement even today. Here is the real prick:

The creeper on the lid extended
Its branches encircling my feet
Sometimes a pink rose bloomed
Its heady fragrance arousing
Strange desires
Maybe tonight my husband will lie with me
It took two thorn pricks
For me to be with child
And then, it was back to our own beds. (p.120)

(The italics are not the poet’s)

The trunk is never forgotten either by the new bride, the married woman later, or the enthusiastic reader for ever. Things may change for the better. There may be radiance again after darkness. One would wish that all would have Ali’s smile, a blessing come true, and hope that there would be smiles all over.