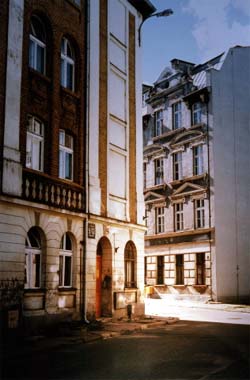 The Protea Court was once a well kept and distinguished looking apartment building, but it has slowly deteriorated due to bad management. But now it's mostly occupied by students and seasonal factory workers.

It was a surprise to many of Bill Thomas' acquaintances that he still lived there. But it was also an annoyance to the Protea Court tenants who he perpetually scolded for the litter that they left in the corridors, the broken bottles at the entrance hall, and the loud music they played long after midnight. Bill was especially unpopular with his neighbor, a young student by the name of Sipho Moleni who liked to regularly party with dozen of his friends.

'Why don't you move elsewhere, Mr. Thomas, to be with your people? We like loud music and we don't mind noise,' was Sipho's regular answer to Bill's bitter complaints.

'You see, my friend,' Bill would force himself to be calm. 'I like it here, I like being amongst young people. I only ask for a little consideration. I start work early at the shop, and I need to have a good night sleep.'

They argued constantly, and although Sipho promised to change his ways, Bill knew that he was not winning. Still he refused to move. His apartment was on the fourth floor, and fortunately, he had no people above him. It was a great advantage to live on the highest floor, and he even had a lift. It was old and made a lot of noise, but it worked very well. This lift was his lifeline. He couldn't do without it because he was almost a cripple. He had grotesque looking bandy legs, and they were getting worse and worse.

They were not like that when he moved into his apartment twenty six years ago. Then he was a healthy man and a prosperous business person. He owned a haberdashery shop which was very popular in town. He and his wife Dorothy worked hard to make it a success, but it was worthwhile. Unfortunately, Dorothy fell ill and all their savings went to pay for her medical bills. Alas, she died and Bill was left with expenses he could not cover. He sold the shop but remained there as a shop assistant, because the new owners could not do without his knowledge of all the zips and ribbons, needles and buttons. Bill could find them instantly with his eyes closed. He also had an uncanny instinct of finding the right item for their customers, and his advice was priceless. At seventy Bill was still working eight hours a day. He served his customers with his old fashioned politeness and never showed his tiredness or discomfort, even though his legs gave him hell.

After a day at work, he did a little shopping in a nearby shop, and drove home in his 1972 Volkswagens Beetle. The car was old and rusty, it had big mileage and little power, but he would never part with her. The Beetle was his lifeline too. He always parked in the same place, in front of the entrance of his building. This was done to spare his swollen, bandy legs a longer walk. It was just a few steps to the lift, and up to his apartment. This was his home and he could finally relax, cook his supper, listen to the radio and read the paper. His apartment looked exactly as it was during the time when Dorothy was still alive. He felt her presence in the photographs on the walls, her embroidered cushions and the ornaments she bought. She was still with him, but how could he explain this to Sipho.? That was why he could never move. In a way he was quite content with his present life, if only Sipho and the rest of the youngsters were a bit more considerate.

That night there was a lot of noise and loud music, Bill was still tired when he got up and rushed out so that he would not be late for work. The entrance door was open and he noticed (to his annoyance) that a pile of empty bottles were there, this meant that they had had a big party last night. He limped outside with the car keys already in his hand, and suddenly he stopped confused. There was a strange car parked in the place of his Beetle.

His car was not there. Bill looked widely at the cars parked in the street. He thought that maybe he had forgotten to park where he always did. He limped from one car to another examining them, as if his Beetle had changed her shape. He was certain that his car was somewhere there. He could not accept that the Beetle was gone. His heart was thumping painfully in his chest, he was sweating profusely and he felt more and more confused. He felt so insecure that he began to whimper like a lost child. Finally he turned to the passers by and called to them, 'Has anybody seen my car? Has anybody seen my green Beetle?' But people just looked away, and walked faster after seeing his predicament. Nobody wanted to get involved. Finally a taxi man stopped his cab and called, 'Do you want to go somewhere?'

'I lost my car,' Bill cried in despair.

'Then report it to the Police, I'll take you there. You should never have left your car in the street, there are thieves everywhere.'

'But I always do, there is no garage where I live.'

Bill had a hard day, and he was exhausted when he finally saw his last customer. The owner of the shop was sympathetic, and hoped that Bill would sort himself out and that he would be back punctually at work. The business must not suffer. He brought him home and dropped him off at the entrance. Bill slowly limped to the lift. He stood there pressing the button, but the lift did not respond. Sipho was just running down the stairs.

'There is no lift, Mr. Thomas. It got stuck on the third floor. The technician has already been and said the lift needs a new part, and it may not be obtainable anymore. The lift is too old, we were lucky to have it this long.'

Bill stood in front of the lift, staring at the dark door, and as if he were in a trance, he repeated, 'No lift, no lift.' Suddenly a frightening thought dawned on him. How would he get to his apartment tonight?

He could not stand it anymore; he slowly walked outside and sat on the low wall in front of the building. How he wished he could lie down and rest for a while. He could not think straight anymore. People walked in and out of the building. Nobody seemed worried about the lift. They were all strong and had good legs. It was getting dark. The lights came on in the streets and in the windows. Bill watched the lights and felt very drowsy. All of a sudden, he lost balance and fell down on the pavement. He could not get up, his legs were useless, he had to stay there the whole night. He felt so helpless and rejected by everybody that he began to cry. He could not stop the tears what were just cascading from his eyes. He cried without making a sound. He cried because nobody cared, and he was all alone.
And all of a sudden, there was Sipho looking at him, and calling, 'Are you all right Mr. Thomas? We got a special chair for you. We shall get you up in a jive. We managed to nail some planks together, and I got some guys to carry you.'

Bill looked bewildered as Sipho produced a kind of litter which had a seat between parallel sticks. The young men lifted Bill and placed him in the seat, then grabbed the ends of the sticks. In no time they entered the building, and moved to the staircase. Bill started whimpering in fright, but the men just lifted their contraption higher and proceeded climbing up, with Sipho encouraging them and counting the stairs. They soon all fell into some kind of rhythm, and started singing African battle songs which seemed to encourage them to greater efforts. People were opening their apartments, and rushing out to see what had happened. It was a sight to behold. Bill had lost his fear, and he felt that he was safe and cared for. They finally reached the fourth floor, and Bill handed his keys to Sipho. The men carried him inside, and lifted him up from the litter and placed him in his armchair.

'We're not such a bad lot Mr. Thomas,' Sipho laughed when Bill tried to thank them, 'Never give up on us. We're just young and crazy, and don't worry, I'll find some more guys to carry you down tomorrow, no problem.'

'You're my lifeline,' Bill smiled happily, 'the very best.'

The story had a happy ending. The lift was fixed, and the Beetle was found abandoned on the outskirts of the city. She was badly dented and had a cracked screen, but Bill welcomed her as his lost relative. Bill was a happy man because his last lifeline, the good people of the Protea Court made him believe in the kindness of people. He was not alone.