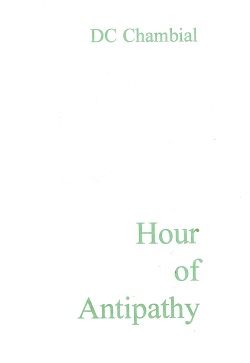 Basically a person of soft and imaginative temperament and professionally an academic, the Himalayan poet D.C.Chambial has already published nine collections of poetry. Hour of Antipathy is his latest collection published in September 2014. Here is the full blossoming of the poet’s creative imagination. The poems in this book are short, cerebral and serious minded most of the time. What shook the poet has been the way of the world he has seen, experienced and suffered too at times. His dislike for the way the world goes on causes flashes of his imaginative expression. He wishes for harmony to emerge like a flood and spread its love over the world. The trope needs to be taken only with regard to love with power and vigor. The first poem in this collection is ‘Temple’. The shine is a memento to memoirs. ‘Escapade’ reads like a story-poem. The rope gives way but the boy on the swing is saved and the heavens are thought of. ‘The Bliss’ is about the tale of Manmadha, our God of Love, receiving the Supreme Being’s ire. The tough soil of the mountain is hard to penetrate and the kitchen garden needs what the human being needs too.

Soft is what one needs
Soft sentiments, soft moments,
Soft touches and, of course,
Soft relations
To avoid hurts and bruises
For copious growth
Of stout relations and roots.

‘Levitation” is about a trance

Of great use, when one wants to evade eerie things,
One detests, and wishes vigorously he sings.

Earth turned black,
cries for a drop like papiha
to wet the dried throat
in this cruel hour of antipathy. (p.18)

Delicate sensibility and sparkling brevity of imaginative expression are the sleight of this poet’s hand. There are poems of the hard actuality around in poems like ‘Panic’ and ‘Smoking Sounds’. Degeneration in society raises panic in the intellectuals. There is a storm within and without. Then comes the savior Anna Hazare, people rejoice in His victory. But the poet wonders whether the rats stop to nibble, running blindly in the labyrinth. The poet is pained that burnt stub, desiderated life, desolate desert surround smoky sounds of treason. There is the single syllable that gives solace. Here is the poem in its entirety.

Om
Ran
like a horse
amuck
Across
the canyons
and hills
In search of
one’s true
self
Bruised and wounded
staggered
and stumbled
Over a stone,
broken
heard the sound.
Om! Om! Om!
since eternity

When one is in devout thought, the Supreme Being unveils the beauties of the world:

Look at the beauties:
The texture and structure.
The cadence:
Birds, wind, water.
… ….. …
Sit, meditate upon
This LILA in awful wonder.

The hour of apathy is best treated along with thoughts of the Master, His compassion and His concern.

Shepherd holiness, though present,
Lost in the maelstrom of modernity.
Search for innocence
of heart since ages

The key words in the poems reveal the poet’s mood in the hour antipathy. ‘Wizened’, ‘simmering’, ‘chase’, ‘smoky’ ‘shades’ ‘remorse’ ‘thunder’ ‘stunned’ ‘tsunami’ and ‘trials’ are some. The hardened, hateful and disgusting ideas are a pain in the neck to the sensitive poet. We feel this expressed in a poem where the country is referred to as mother.

She – a desert
without hope,
waterless, grey,
scorched and ashen,
hanging by the evening sun
on the mountain top
looking into the wizened sky
counting the lost stars.
Himalayas and Indian Ocean:
vast stretch of rugged tears and blood.

The poet ruminates about solitude in its shapes and shades, a pool of water, serendipity, birds, and mountains.

Sun-birds
skim over, slide on
the soft sun
merrily minting joy
discovered in the dungeons
of desperadoes –
shades of solemnity

‘Women in Kitty’ is half-serious and half-humorous - both ways it makes the reader think of kitty parties. The lines about remorse are about the speaker of the poem or the poetic self.

Some times, somehow even angels
mislay their sanity
to enter the devil’s dungeon.

The poet’s bitterness experienced is expressed in disgust thus:

This is the way of the wisest smart world
To work with faces veiled to shun truth
….. ….. ….. …..
So goes the world with her artless mean naïve,
Siphon blood out of ones, who directly crave.

There are many ways to get rich by digging or filling sacks. Rag pickers survive. Some even become multi-millionaires. The poet is disgusted with the despicable greed of people expressed thus:

The kindred souls, in cold, they shiver,
Spring up to toil and calm the fire in the belly,
With first ray on sun, their faces aglow,
Pounce on the garbage hill, their sacks to fill.
….. ….. …
They do not know. Life follows. Their hope stands
Like morning fog, ready with sacks in hands.

There is scathing criticism of evil living and soulless bodies:

We’re living in a land
that abounds in
wolves, hyenas, and jackals
care for none
save for their own selves and broods;
proficient in pilfering
the share of the meek hen and lamb;
their concern confined to their clans

The poet chose the metrical form of Villanelle to sing his praise of the country. The word means a rustic or peasant. It is a composition with six stanzas of three lines with the last having four lines. Here are two stanzas out of the six:

With coal their face all black to pate
Rolling in the mire of fraud, who guess?
My country is indisputable great
… …. ….. …
Men may live or men may die of their fate.
‘Sukh-dukhe same kriv?’, thye equipoise possess.
My country I indisputably great!
Her polity is yet all the more great!

The poet Chambial doesn’t leave anything for imagination – adds in a foot note ‘coal scan during UPA II’. He has a flair for encapsulating his poems in brief stories. One such is the piece written long-after visiting the North-Bay Island, Andamans. The narrative is about feeding the poor kids with tasty Paranthas. The conclusion reveals the fine sensibility of the poet:

They grab it all and hop to their sweet hall
… …. ….. …
True happiness lies here on this Earth
when we have time to look around and care,
the Nature too seemed all the more happy:
she blessed them all with a mellow mizzle,
hot aft’r-noon, by the beach, the place that sizzle (sic).

Many of the poems, ‘Melee of Memories’, ‘Pan-Historic Eons’, ‘Down the Valleys’, are records of intimate personal feelings with the heart in the right place. Readers remember long the last two lines of the last poem in the collection and think of the poet Chambial with affection and reverential admiration:

Life a unified whole of the most disparate ways;
Trials sequentially dog the human horrid days.