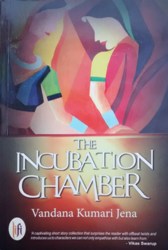 If you like really clean & clear stories you should read The Incubation Chamber by Vandana Kumari Jena. Replete with interplay of emotions, sentiments and motives, the 24 stories in 196 pages – suffused with feeling and crafted with due psychological insights – vie with one another to entertain, move our hearts, churn our minds, prick our consciences. The narration is straight, the language lucid and felicitous. The stories steer clear of abstract tracts, ponderous descriptions, doleful and maudlin monologues, loopy ruminations, philosophical colloquies, ideological polemics, or preachy litanies. They are just sweet and endearing. The plots and narration are pellucid with conceptual clarity.

The writer, a senior IAS officer, firmly believes in the power of women for they are “actually the stronger sex” and they “hold up half the sky.” Calling herself “an ardent feminist” she asserts that the weak-woman stereotyping is a travesty of the truth.  Yet her feminism is nearer to humanism and opposed to dogmatic male bashing. Everyone irrespective of their gender or socioeconomic moorings would enjoy these stories to the hilt. The inter-gender fortes and foibles are fairly balanced: we have men with positive traits (Vikram; Kanwaljeet; Vanita’s father-in-law; and a Samaritan whose goodness is clouded by his ‘punk’ like appearance complete with a dragon tattooed shoulder); as also women with negative shades (Shweta; Hem; and Vanita’s mother). Unless there is a male-female harmony, life would be warped. To drive this home, let’s digress to a recent incident in Delhi (May 11), wherein the 30-year old mother Ramanjeet Kaur was brazenly ill-treated by a traffic head constable, a male. Had the incident not been captured on the cell-phone of a motorist, a male incidentally, the offending cop couldn’t have been promptly punished. The point is how to make women realise that they are not weak but potentially self-possessed and strong. The stories by Vandana fulfil this need and highlight this aspect.

While all the stories in the collection essentially stem from the interaction of human behaviour of the contemporary Indian society – some are provoked by crimes against women; some actuated by hypocrisy of social activism; some have medical background; some take you abroad to the USA, France and Japan with tempting individual liberty and self-oblivious sensuality; a few are set against official backgrounds, sense of duty, critical decision making, terrorism and kidnaps; many are inspired by familial life including marital equations, conjugal infidelity, ill-treatment of the old, and bias or discrimination against the girl child  – with a natural and inevitable overlapping among all.

Trying to give story-wise synopses would rob the thrill of suspense and the spirit of original exploration. Excerption of a couple of extracts would, however, serve as an appetiser for the eclectic mix of stories that they are.  See how a meek middle-aged wife – regularly thrashed by the sadistic husband – acts out her agony and humiliation, in a story seamlessly connected with epistolary bits –

“Love does not mean subjugation. It must mean growth, not annihilation of one’s being... I am only taking the clothes my parents gifted me from time to time. I didn’t know that twenty-five years of life could fit into one suitcase. It makes me realise how empty my life has been but it also makes my leaving easier. I do not want to take with me anything that you gave me. So I am leaving behind all my jewellery and also my mangalsutra. I have just one request. Do not look for me.” (The Escape)

Likewise, the writer’s evocative observation about silence is quotable –

“Silence speaks. And the sound of silence echoes and lingers long after. There are different kinds of silences. There is companionable silence, the kind which makes conversations redundant. There is angry silence, which makes conversations dangerous. There is uneasy silence, which one is unwilling to break, because the silence buys that rare commodity, peace. Silence grows. It grows in a vacuum. It occupies every nook and cranny. It grows in crowds as well. It eases out all the noise, drowns all conversations and then hangs heavily in the air, like cigarette smoke. It falls like a curtain or a cloak, enveloping people beneath.” (Courage)

Which of the stories you think is the best? If my answer is not ‘each and everyone,’ I will be dishonest. However, my ever-tilting scale would say that the best and the most dramatic story is ‘The Obsession’ – an Indian family drama on the American soil. If twists and turns are the criterion, ‘Blood Ties’ – packed with as many as ten surprises – walks away with the trophy. The story is about an elusive search for a compatible kidney for a middle-aged man ailing from a malignant renal cell carcinoma.

A couple of stories tell us how a little amount of empathy and sense of imagination can bring about a great deal of positive influence in the lives of sufferers and how one need not shrink from telling white lies if it is going to help someone in distress or save a desirable situation. The pageant of characters includes – victims of circumstances; a surrogate mother; a man affected by the strange Noonan’s syndrome; a philandering husband who, when caught red-handed in an extra-marital fling and confronted by his wife, apologises but insists that unlike a man, a woman is never driven by lust and is always monogamous – only to find himself disproved after a decade by his then middle-aged wife. Another story juxtaposes three working women and each of them reacts in different ways to an essentially similar crisis, wherein the least educated Class IV employee comes through with flying colours.

Nowhere are the stories overawed by any authoritarian streak, even as the writer is ensconced as Secretary in the Ministry of Rural Development; whenever there are allusions to officialdom the characters never glare at you, but are unobtrusive being incidental the plot.

(A condensed version of this review appeared in The Hans India daily, May 17, 2015)