A poet is alone with his feelings. Once he pens them, they are universal because they transcend portals of self and individual confines. - Bhagyalakshmi

A highly qualified officer of the Government while in service, Dr J. Bhagyalakshmi has been a poet. Earlier she has been associated with Poetry Club of India (Continuum) and editor of Communicator and Indian Foreign Review. She held the post of Director (Media) in the Ministry of Rural Areas and Employment. So far she has published four poetry collections: Happiness Unbound (19980, A Knock at the Door (20040, When Fortune Smiles (2007) and Missing Woods (2014). 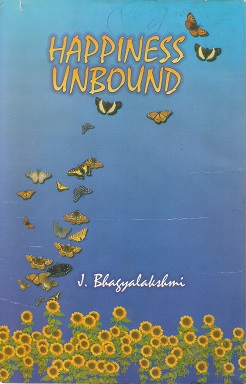 The collection under review Happiness Unbound is of a special kind which displays deep femininity replete with pain and forbearance with a deep and wide understanding of the human condition, particularly of the fair sex. The title reminds the reader of Shelley’s Prometheus Unbound. The title refers to a condition totally different from that of the Greek legendary character. Prometheus’ in the Greek closet play was in intense pain and he does not have hope of even death for liberation. The pain and suffering of the speakers in many poems is heart-rending and there is no release from captivity which the Greek had. The speakers in the poet’s mind are released from happiness itself. At first the title sounds enigmatic or paradoxical but the suffering of the poet’s protagonists is excruciatingly real.

The speaker in the poem ‘Two Lungfuls’ remembers, after mentioning the Greek hero says this:

But look at me,
There is air everywhere
Below, above and all round
Blowing over hills and dales,
Lakes and oceans
And in open spaces –
Yet neither could I borrow
Nor could I steal
Just two lungfuls
When needed it most. (p.31)

The poet being a lover of literature even in her student days knows of Greek mythology and legends and speaks of Damocles and Phoenix too in her poems.

Literature students remember the poem Ancient Mariner and the condition of the one with the dead albatross hung around his neck and the line: Water, water every where but not a drop to drink. The descriptions of suffering in some of the poems are beyond compare and the poet really wants to convey that feeling.

Waves are a common feature in the earlier poems. The speaker in ‘Waves’ says:

What waves are you sending out?
They are touching me.
There is a catch in my throat
And a stirring in my heart. (p.1)

The speaker in this poem is in an exuberant mood of joy. Another speaker in another poem reveals a peculiar feeling in ‘Magic Tune’.

There is a magic tune
… ….. ….. ..
Sometimes it is a wave
Coming with vehemence,
Breaking at
My inner being
And leaving
Traces pleasant and unpleasant.

In ‘Ethereality’ the speaker aspires to sublime happiness:

Let me be pure radiance
Exuding waves of love. (p.4)

In ‘Communion’ there a new way of being poetic for sending and sharing a vibration across closed lips with a question:

Some poems impress the reader that the thoughts communicated are celestial. ‘In Silence’ the speaker said:

My thoughts come up to
Your abode
Make a circle and retreat
Without ever touching your door. (p.8)

In this the pronouns may refer only to the lover and the ladylove, the later being the poet-speaker.

In ‘Presage’ the speaker has an intense yearning with devotion for the ‘you’ and that may be God too. This is one of the most luscious of the poems in this collection, the last line being the best. Hence the whole poem;

I searched you out
In that crowd
My eyes fixed on you
Then hustle and bustle
The crowd surged on
And you were near
I could have stretched
My hand and touched you
But I didn’t
I was silent
No rustle from my silk
No jingles from my bangles
No sounds from my anklets
Yet you turned round
And smiled!
Dear me!
I forgot the jasmines in my hair. (p.10)

In ‘I know not what to Say’

You are my inner self
That goes with me
Through thick and thin
Yet if I have to define
And give you a name
I know not what to say. (p.12)

‘Happiness Unbound’ is happiness released. It is seen even in the earlier poem also, in ‘Those Eyes of Thine’ which is pious and highly devotional:

…. ….. ….
Their baby like shine
Purity of shrine
Brings to my mind
All that is kind
Could they have ever
Contracted dear
Thinking how
Worthless I am? (p.14)

In ‘Happiness Unbound’ there is a dialogue which ends thus:

“Do we know your father?”
They asked haltingly.
I nodded:
“Who is he, if we may ask?”
I beamed with happiness
When I uttered:
“The Lord of the Universe.” (p.15)

Devoutness with deep faith is the theme of many poems. ‘Where Were You?’ is about a search:

Awareness of human failings and compassion too are in some poems like ‘The Living and the Dead’:

….. ……
We overflow with ourselves
Filling nooks and corners
Leaving no room even for the living
And as for the dead,
May their souls rest in peace. (p.19)

In the poem ‘Silent Pact’ the antecedent of the pronoun is left by the poet to the imagination of the reader. The ‘you’ could be the lover or even the Supreme Being.

I am because you are
But always you are
With or without me
So it is my needs
That you should heed. (p.21)

…it is my earnest wish
And a prayer from my heart
That you be with me
Whether I move or not. (p.24)

‘Watch out’ is about impermanence:

I know the call will come
Later or now
We should part
And go our different ways. (p.25)

‘Eternal Spring’ is a deep yearning. The evasive dream is the floating thought.

Let me try once again
To catch that
Evasive dream
… … …. …..
Let me feel it
Even if it rushes like wind
Let me wake it up
Even if it is in slumber
Let me melt it
Even if it is frozen
Let it be an eternal spring
In my heart for ever sprouting. (p.27)

Serious and intense cerebration is revealed in ‘Siddhartha’.

At a glance –
That Siddhartha
Before he became the Buddha
Comes into my thoughts
Like a glowing question mark
And the rest is
Blank, bleak and dark. (p.30)

The thinking could be that of Yasodhara.

‘Wail not for a dream’ again is moralistic:

For what use is a body.
When there is no life?
So it should meet its end
And who could do that
Better than you yourself? (p.41)

Crossing the limit is the point in ‘Insurrection’. The cruel perpetrator’s jaw drops when the resistance in the victim of cruelty is witnessed:

When the chains were tightened,
Day after day.
Making me immobile,
I knew it was not death
But near about death.
Choking yet not killing,
Stifling yet not snuffing out,
Death like life,
But not death itself.
When the chain around my neck
Started tightening
That is when I yelled
And let out a cry
Blood curdling and spine chilling cry,
Which made you still
In your tracks, dropping your jaw. (p.64)

In her very first collection, the poet Bhagyalakshmi has made her predilections and prowess evident. She expresses her feelings of devoutness to the Supreme Being and forbearance of all suffering caused by a perpetrator.