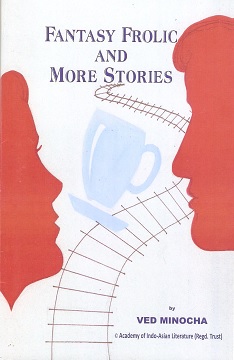 Ved Prakash Minocha is an academic who started writing stories too. An octogenarian his first book of stories came out in 2013. His stories are short and eminently readable. Comedy and fantasy usually come out with a nice blend interwoven with gumption in his writing. Sustained suspense makes the reader race forward to see the end. Many a journal and many a periodical used his stories. The present collection under review carries sixteen stories. In his ‘Author Speaks Up’, Minocha wrote: ‘I hope Fantasy Frolic, my second baby will bring smile on the readers’ faces and thoughtful thinking in their minds.

For the title of this book the writer preferred to use a neologism rather than a portmanteau. However the first story is ‘fantafrolic’. It is fantasy and a pleasant tickler. On Rajdhani Express to New Delhi meet a gent and a lady. The gent had a faint remembrance and a feeling that he had seen the lady in the distant past at the college where they studied. Slowly he remembered the name Shabnam, who shifted location to the US. The recognition came a short while before the gent’s destination, Mathura. The first person narrative is quick. Every sentence is intended to increase the reader’s urge to reach the finale. The clever and practised reader finds the connection between the story and the cover page drawing.

‘Where is my Polo’ is the story of two sisters. Polo moves to the US and in the story has come home in Punjab where her sister Mano lives in a village. Mano visualizes Polo before her like a foreign returned fairy but is disappointed. The young woman wonders ‘Where is my Palo’! when her sister upbraids her saying ‘Don’t call me Palo, call me Palvinder Madam. You understand?’ The reader too is electrified.

‘Shradhanjali’ is a about the belligerence of a woman who vilifies her husband’s brother. The story is absolutely ‘desi’ in the best sense of the word. Shradhanjali and the ‘havan’ are the stage on which the narrative takes its course.

‘Twin Toys’ is a story that illustrates the truth of Kipling’s statement ‘East is East and West is West: the twine shall never meet.’ This is what the Westerner Rosy tells her Indian hubby at the end of the story: ‘I am taking my Cathy along with me; I have a son from my first estranged husband. And my mother would now play with the twin toys.’

A sharp shooter kills a cobra and gets into trouble when terrorists offer him a job which he dreads and hates. He goes to the extent of planning suicide. Having come out of a dreadful dream he says to his wife: ‘I will never become a sharp shooter.’

‘Obituary’ is a sentimental story of an ex-army man who maintains military discipline in the every day affairs of the family. The remembrance of the son of the departed one’s traits and deeds is an intervening narrative.

There is a parrot’s tale in ‘Homage’. A man loves his parrot and names it Marshal. The parrot keeps company with him all the time. In the man’s ashes is found the chain he tied on its neck. The bereaved son has the last say: ‘I washed it away and stealthily put it in a bag of the ashes to be immersed in (the) Ganga.’

The title of the story ‘The Sea Swallows All’ and its beginning take the reader on a wrong scent. The central character Raja knows about his earlier birth as a son of Amna Ammi in Dubai. Rajni his mother makes the sea swallow all saying: ‘You may forget Amna Ammi, but I will not. If I had a grand daughter, I’ll name her Amna Ammi.’

‘Soul Mates’ is about the pride of the rich. Though a girl’s father tries to slash his daughter and her lover’s affair, the two defy him. They wait to marry till the young man gets a good job to equalise them. When the father says ‘At last you humbled the prestige of your Papa’ the girl corrects him: ‘No Papa, not your prestige, but your pride.’

Role models are respected. The young man in the story ‘Return Gift’ becomes a role model declaring as his return gift the declaration that he ‘disowns his parents, right now.’

Usually everyone loves to be totally independent but not all take steps to let themselves free from bondage like the one in this story. ‘Second Coming’ is the story narrated by Jwala Sharma to the journalist who interviewed her in the old age home “Adarsh Home’. How, why and what she narrated to the journalist and the last paragraph too make very interesting reading.

‘Saheb and Saheba’ is a fast narrated story which is impressive though artfully concatenated.

The two stories in the lighter vein called storiets are interesting and readable by story lovers. ‘A Wishful Wonder’ is about a scooter rider who thinks of giving a lift to a coming young paragon of beauty but is fooled by an old granny.

‘Woeful Warning’ is the story of a mother-in-law and her bad daughter-in-law. The narrative show cases how the young daughter-in-law metes out painful ill-treatment to the old woman. Old and helpless mothers-in-law face similar tribulations in actual life.

Some stories may smack as sentimental but a short-story is one not always praised or appreciated by every reader. Minocha coming up with another collection is delectable. Lapses in language use are not a real stumbling block to the avid readers. Any way there appears no copy-editing at all and not really good proof reading in many of the books coming out.