This year on 26th January, India celebrated its 67th Republic day. With the intelligence information gathered that terrorist groups from across the border are out to spoil the fun and grace of the occasion with their sabotage and disruptive activities, the security was very tight and high alert across the capital and more particularly in and around Rajpath. Even in VIP enclosures, we had to pass through several layers of security as an abundant precaution. Consequently, the entire event passed through peacefully with zero error and usual grandeur and ambience for which our Republic day Parade is so sought after event by the Indian masses and onlookers.

Mr Francois Hollande, the President of the French Republic who came to India on 24 January 2016 on three days state visit, was our honoured chief guest at the Republic Day Parade. Reportedly, just before his arrival a warning letter purportly issued by ISIS was received in the French Consulate against the upcoming visit, causing enough headache to security agencies for round the clock alert and vigil. The parade was marked with the presence of the French Military Contingent of 136 soldiers of 35th Infantry Regiment along with the French Military band. In a way, this was a historic incident as it was for the first time that a military contingent from the country of the chief guest was invited to participate in the Republic Day Parade.

Marching contingents included soldiers from Para, Signals, Rajput, Garhwal Rifles, Grenadiers, Assam and Gorkha Regiments with respective military bands including a contingent each from Navy and air Force as also a special Dog Squad. Of special interest were Mechanized Columns of Army including T-90 tanks, BRAHMOS missiles, AKASH Missiles, SMERCH, ICE & LIC Warfare Systems, and a Tableau each from Navy, Air Force and DRDO highlighting military might and prowess of India after seventy years of independence. Apart from this, the BSF Camel Contingent, contingents from the para-military forces, Fly-past by key fighters and transport aircrafts of the Air Force, Motor-cycle Display and School Children’s Pageant added colours and enthusiasm to the Parade.

However, the major attraction in this year’s Parade was the Cultural Pageant section which provided a glimpse of our ancient civilization, cultural diversity and progress reflecting both India’s glorious past and citizens’ aspirations for a prosperous and happy future in the years to come. The carefully chosen colourful tableaux depicted the cultural, social, economic and technological facets of the modern India encompassing the beauty of our landscape and architectural heritage. 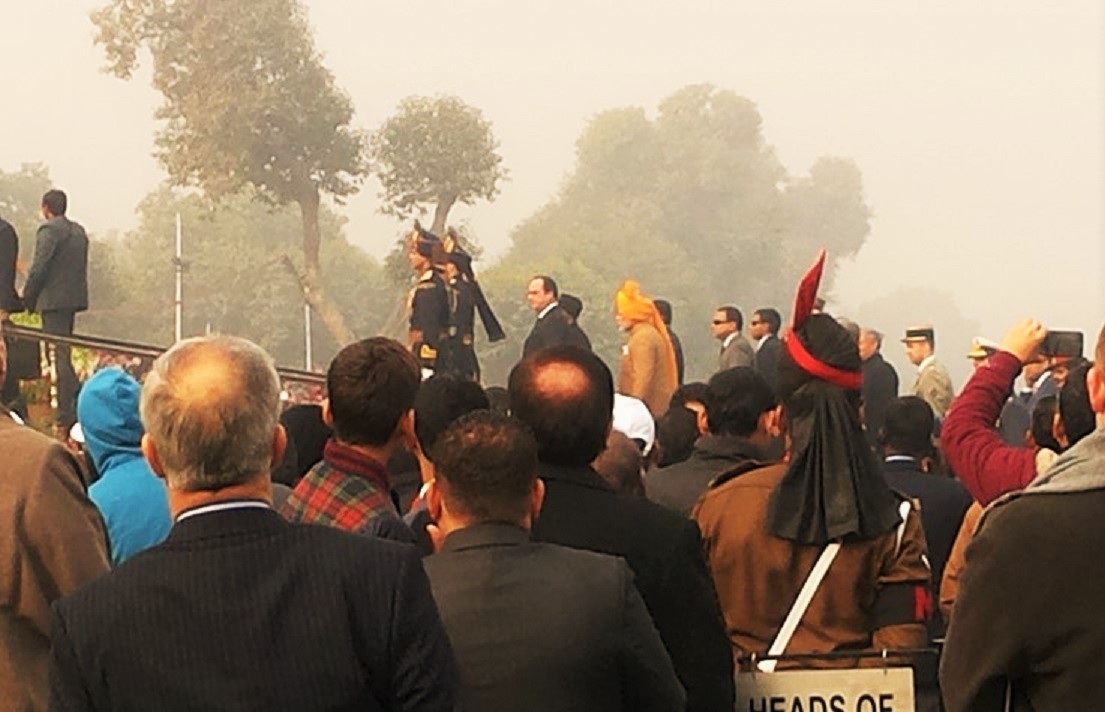 1a. VVIPs - Being Escorted to Reserved Enclosure

Weather on the auspicious day was cool and comfortable but the Sun kept on playing hide and seek all the time due to partial clouds cover. This affected the quality of pictures taken from the smart phones. The advantage in VIP enclosures over the rest of audience is that they have the previlege of watching dignitaries' arrivals and departures as also the elegant performancve of the school childrens. While all dignitaries had dressed up well at best on the occasion but the Indian Prime Minister indeed stole the show with his conventional Indian dress and saffron turbon. In the following paragraphs, tableau highlights are summarized with a photograph each in the same order as they followed in the Republic Day Parade.

This was followed by the tableau of Gujarat showcasing the Gir Wildlife Sanctuary, the abode of the Asiatic lions. The first part of the tableau presented the life-size model of an Asiatic Lion in a majestic posture. The middle part represented the success of the Lion Conservation Programme in the state. The rear part represented diverse flora and fauna of the Gir forest – a home of several species of mammals and birds. The people of Sidi community of Gir forests were also shown performing their traditional dance.

The next was the tableau of Sikkim representing celebration of Buddha Jayanti popularly known as ‘Saga Dawa’. The tableau’s front portion contained the prayer wheels having rolls of mantras. These wheels are religious symbols for performing prayers. The rear portion of the tableau represented religious procession of the Buddhist community on the occasion.

The colourful tableau of Jammu and Kashmir represented economic and natural environment transformation in the rural areas under the flagship scheme Mera Gaon Mera Jahan under the Clean and Green Mission of the Government of India. Front part of tableau contained three women in traditional costumes with Basmati rice from Jammu, Kashmiri saffron, dried apricot from Ladakh and a basket of Kashmiri apples. The rear part, the local people are shown picking, grading and packaging of apples. This depicted growth and development in rural Kashmir via adoption of the modern technology.

The Rajasthan tableau depicted the architectural heritage of Hawa Mahal of world fame. Built by the ruler of Jaipur Maharaja Sawai Pratap Singh in 1799 AD, it is a five storey beautiful building in red with numerous windows known as Jharokhas. The front portion of the tableau contained the statue of Maharaja followed by women performing folk song Panihaarin.

The tableau of Chandigarh represented architectural landmarks and greenery of the city planned by the famous French Architect Le Corbusier. The front part depicted the symbol of the city ‘open to give and open to receive’. The back portion contained models of the Capital Complex, High Court, Legislative Assembly, Rock Garden etc.

The tableau of Tripura represented the Unakoti Scluptures depicting different varieties of rock found in Unakoti located about 185 Km from the capital Agartala. These sculptures date back from seventh to ninth centuries AD largely representing various Hindu Gods and Godesses. The place is of major attraction for tourists and pilgrims who frequent the place so often for the ancient sculptures.

The tableau of Odisha depicted ancient maritime supremacy of the state in the inland and foreign trade as also Boita Bandana festival of Sadhavas, the trading community of Odisha. It showed the role of Sadhavas in world trade during the olden days with their life size statues and sinduks (boxes). Odisha was known as Kalinga in the ancient times with established trading and cultural relations Far East lands of Bali, Java, Sumatra, Borneo, Malaysia, Thailand etc.

The tableau of West Bengal exhibited Bauls of Bengal, the wondering minstrels. They are people of actually nomadic folk origin from both Hindu and Muslim communities spreading the message of peace, brotherhood and mystic philosophy. Bauls still use traditional instruments like Ektara, Dotara, Khamak, Nupur, Premjuri, Dubki etc. and are recognized by UNESCO as one of the Master Pieces of the Oral & Intangible Heritage of Humanity.

The tableau of Karnataka displayed Kodagu, the coffee district of the state. Its significant production of coffee has made India the sixth largest producer of coffee in the world. The Tableau displayed various stages of coffee production to its final consumption. The Kodava women folks of Kodagu in distinct costumes accompanied the tableau performing their traditional dance.

Madhya Pradesh has a dense forest cover in almost one-third of its area and is a natural habitat of the rare breed of tigers – the white tiger. The tableau displayed models of white tigers and other associated species in the wilderness. The rear portion of the tableau presented the floral and faunal diversity in the state.

The tableau of Chhatisgarh displayed Khairagarh Music and Art University considered to be one of the oldest in Asia furthering the cause of music, dance, fine arts and theatre. The front part had a life size sculpture of Murlidhar and the rear part showcased the artistic building of the university and various forms of art and music.

Todas are a small tribal community in the Nilgiri district of Tamilnadu and the tableau depicted their living in the natural habitat amidst ‘Kurinji’flowers that is stated to bloom once in twelve years. Todas are one of the six primitive tribal groups of Tamilnadu who speak non-linguistic language and attract attention due to their distinct appearance.

The tableau of Uttarakhand depicted the festival of Ramman celebrated in in April in Salur-Dungra village of Chamoli district. This festival was declared by the UNESCO as world heritage in 2009. The front part of the tableau depicted the mask of God Narsimha with assortment of other masks, the middle part showing folk dance artists playing Bhankor (traditional folk musical instrument) and the rear part carried the models of the Temple of Bhumiyal devta and the Himalayas.

The Assam tableau depicted the popular festival of Rongali Bihu in the state celebrated in the spring season during April every year. The tableau showcased the local people engaged in Bihu celebration in the backdrop of a hut in the rear portion. The occasion also marks the beginning of the Assamese New Year.

The Ministry of Social Justice & Empowerment fielded a tableau dedicated to Dr Bhimrao Ramji Ambedkar (popularly known as Baba Saheb), a great philosopher, scholar, jurist and architect of the Indian Constitution. The tableau gets relevance in the context of the grateful nation commemorating the 125th birth anniversary of Baba Saheb this year.

The tableau of the Ministry of New & Renewal Energy showcased its ambitious project of achieving renewable energy capacity target of 175 GW by the year 2022 through wind, solar, ocean, tidal energy etc. This gets increasing relevance because these non-conventional sources of energy are accepted universally as clean, inexhaustible and environment friendly.

The tableau of the Ministry of Drinking Water & Sanitation represented the theme of ‘Swachh Bharat’ (Clean India). The front part displayed the logo of ‘Swachh Bharat Mission’, the familiar spectacles of Mahatma Gandhi. The rear part showcased the citizen of India basking in the clean, green and hygienic environment in villages and cities alike.

The Ministry of Communication and Information Technology showcased achievements of Digital India aiming to transform India into a digitally empowered knowledge based society and economy in its tableau. The front part of the tableau highlighted digital services and gadgets like mobile phone, tablet, USB Drive, Chips etc., the base was shaped like a mouse of computer and the tail portion represented citizen centric services like e-Health, MyGov, Bharat Broadband, e-Education in rural areas.

Election Commission of India too had fielded a tableau this year on the theme of "Inclusive and Ethical Electpral Participation' of the citizen of India. The Commission depicted its initiatives in the form of model polling stations, ramps for persons with disability, help desks, assistance for elderly and so on so forth. The front part of the tableau displayed the people in different costumes symbolic to the diversity of the nation. The Ashoka Piller symbolized the resolve to promote ethical and informed decision by the electorate. The middle and rear part showcased the "National Voters' Service Portal" a digital platform of e-enabled services and Electronic Voter Machine familiarization camp.

The last tableau pertained to the Ministry of Panchayati Raj depicting the theme of 'Sashakt Mahila, Sashakt Panchayati Raj evam Samaaj'. This represented the qualitative transformation in local governance through the participation of women since independence. The tableau showcased the success stories of the Gaurmati Gram Panchayat of Chhattisgarh and Dari Gram Panchayat in Nashik (Maharashtra) which have become emulative models of development of the Panchayati Raj. It also presented the Anganwadi centre of Dindugal Panchayat in Tamilnadu and its success campaign for Swachchh Bharat and Computer literacy for young girls.

Indian civilization is over 5,000 years old with more than two thousand ethnic groups speaking different dialects and linguistics with another dimension added on account of large variation in literacy and income. Notwithstanding an amazing amalgamation of  different races, communities, cultures and religions, the Indian people by and large live together in harmony, peace and unity. Though plurality and multiplicity characterize its socity and culture yet it presents an excellent example of a distinct nationality of mutual tolerance and respect. The Republic Day Parade with its variety of tableaus so well represents this amazing unity in diversity.