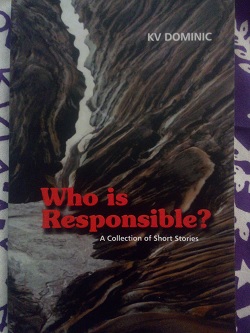 In his preface to this book Dominic wrote: ‘In my stories I have used several themes and focussed on many issues which are universal and at the same time frequently occurring in my own State, Kerala.’ The themes are ubiquitous and are valid as a portrayal of the contemporary degradation of values of every faith almost everywhere.

Winner of high awards like international Poets Academy and Kafla Inter–continental Award of Honour, Dominic writes both in English and Hindi.

Retired from service as an academic at fifty-five as per the rules of the Sate Govt. of Kerala he worked hard editing and publishing numerous books in English inviting articles of enthusiastic writers and academics, thanks to the forward looking publisher of Authorspress. This new book of his fifteen short stories is an illustration of his aplomb.

The first, the title story ‘Who is Responsible’, describe incidents of illicit relation, elopement, cruelty, an India being abroad being accused as a terrorist and finally a gruesome twin-murder. The characters are an old couple, their son and daughter-in-law and Rahul a driver. The final sentence makes the reader think: ‘Who is to be blamed for the tragedy of Rehman and his family? When thousands of villainous wolves flourish and reign, innocent lambs like Rehman are mercilessly butchered. Where is the poetic justice?’

‘Good Samaritan’ is about an academician who lost his son in an accident, a hit and run act of the driver of a vehicle. He is the good man who made it his life’s mission to go to the succour of those who got injured or those who are bereaved. It is a well-intentioned and inspiring build up.

‘Best Government Servant’ is the story of a poor Brahmin boy who could secure only a clerk’s post in Taluk office though he is highly qualified. The young man is upright and does his work with devotion. He refused the ‘gifts’ other clerks and the Tahsildar accepted with glee. The righteous boy went to the extent of filing a case in the High Court. The judge pronounced a judgement asking for the transfer for all and fixing the amount of fine for the criminals. The writer of the story ends the story thus: ‘The news of the verdict covered the front page of all newspapers as hot news of all TV channels.’ (p.34)

‘Ammu’s Birthday’ is about a tragedy of the little girl’s death in the story written by a lecturer asking the students to comment on the narration. The boys didn’t appreciate the story but the lecturer said that it has a purpose. ‘The more we read such things (tragic deaths) the more compassionate and humane we should become. … We should not turn our faces to (the) miseries and tragedies of others. Such tragedies are part of the flow of the system and as participatory beings we should flow with the system.’ P.39)

Some of the stories aim at correcting the system of blind beliefs and superstitions. Many consider horoscopes sacrosanct and infallible. ‘Fire your Horoscope’ is one such. Dominic’s stories are well intentioned efforts to correct the follies and foibles of many men and women in spite of the fact that they are educated and quite knowledgeable. One of the characters in the story concludes thus: ‘I exhort to you my good friends, neighbours, relatives and younger generation: you should fire (sic) your horoscope. Then success is yours.’ (p.49)

‘Joseph’s Maiden Vote to Parliament’ is not strictly applicable to the current elections. (Now, there is a way of saying ‘NONE’ too as a choice.) In the story there is a dialogue about the US presidential form. Joseph in the story roars returning without casting his vote finding none in the contest deserves to go to the parliament. “I don’t want to cast my vote to any of these candidates, where is the button for it?’ We are told: ‘I don’t want to vote for traitors,’ Joseph roared. “Political mafia Murdabad! Anna Hazare Zindabad!...’ raising his right fist up Joseph thundered and ran out of the (polling) station. His slogan echoed from the neighbouring hills. (p.56)

These stories have a religious slant – sometimes, Hindu, sometimes Muslim and sometimes Christian. ‘Sanchitakarma’ is the shortest in the collection and a parable too with seven cats large and small, and mice. The cats large and small are the souls of Stephen, Stella and their children. The story makes us think of the Hindu concept of karmas and importantly sanchita karma the result of accumulated acts from the past lives. The notes at the end of the narration explained these karmas not known or intelligible to non-Hindus.

Many of the stories in the book titled “Twisted Course of Destiny’, ‘The Twins’ and ‘World Environment Day’ are based on real life situations and happening which tend towards moralisation. Here is a book which is very rewarding reading for the young and old alike. There is a saying in Telugu about ‘Katha’, a story, that it does not have either hands or legs. So that’s it with many of these tales.