The best of my lines are written
not on the electronic wall
nor on the plain sheet of paper
but on the walls of my heart
and if you can’t read them smart
my words are wasted, not my fault - - The Poet 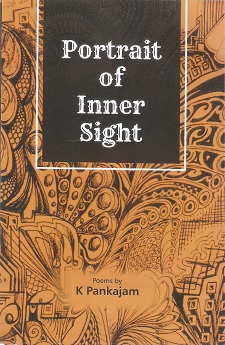 Fundamental womanliness - we call it femininity - surfaces all the time in the writing of some poets of the fair sex. Pain, suffering, neglect, cruelty and thoughtlessness are making men beasts. Women are not becoming belligerent because of basic femininity inherent in them. Their feelings, sentiments and behavioural patterns are dignified and tolerant. The mien of women is dignity, decorum, forbearance and gentility. Pankajam has written many poems and in all her poems she is seen and felt as one with eyes wide open.

Her latest collection of seventy-two poems is unique. Her ‘Dedication’ may be misleading if one does not look into the whole text with an open and understanding mind. Dedicated to the visually challenged or visually impaired, out of politeness, does not mitigate the suffering of the blind. The English have this openly for the less generous: ‘Fine words butter no parsnips.’ There are poems for the unknowing and all-seeing ones too.

Pankajam deals with not just those who are denied the gift of seeing. The poems deal with people who want more than what they have without legitimately working for that. Our literature has a sociological thrust, our tales, our narrations including the epics and sacred writings.

This book has seven sections on the world of visually impaired. It is the expression of the highly sensitive, understanding and empathetic poet, a visualization and creative expression. The unfortunate can be sympathized if one has the heart-in the right place. The poet enters the mind of the unfortunate and makes us think about those we simply name as the blind. And she speaks in the first person:

In a statue or a portrait,
eyes are the last ones shaped
The creator forgot to fill the vision in my eyes,
May be, he was in a hurry, or else
the Provider of light to the universe
had gone in deep contemplation,
my boundaries in life prescribed it,
dimensions too, like a caged bird.

~*~
Unlike the calculated steps at home
the path I tread is longer than yours
the stairs I use go steeper and steeper,
my overstrained ears strain to catch up. (Part I, p.13)

Again and again the speaker of Pankajam’s poem takes us into the depths of her feeling:

Occupying bathrooms or journeys
I’m the last one to get out, others annoyed.
Rebukes are my everyday dues.
…
Even a dog can deceive me
licking merrily from my plate of food.
Thank God, my people are caring, if not…?
What a filthy tongue it has,
The multi-purpose one! (The World of Visually Challenged. Part II, p.15)

Experiencing the void day in and day, in every wakeful minute the unfortunate one, the speaker says:

My presence there, uncalled-for.
I twiddle with my walking stick
sporting a sensibility of ‘otherness’. (The World of Visually Challenged II, p.17)

The poet goes on describing the different aspects of frailty: one after another dinning the feeling into our thinking. Now another pitiful situation:

Public facilities are not for people like us.
How do we know their state and set-up?
Better to stick to familiar ones.
Defying nature’s call needs resistance. (The World of Visually Challenged Part III, p.18)

The inconsiderate behaviour of people who can see all is disgusting but the unfortunate can do nothing except keeping mum:

My identity is the walking stick
With it you recognize me easily.
So are the black glasses I wear,
not to protect my eyes, no need to,
but for others to identify me. (The World of Visually Challenged Part IV, p.20)

Here is another aspect:

Like a mirror,
a lamp need not be in our possession
day or night being the same
inner vision is our guiding light,
But for you the light is a must
lest your sight is of no use
yet we carry one for sure
for you don’t dash at us.( The World of Visually Challenged Part V, p.21)

There may be some solace to the suffering one as expressed by the poet;

May be our own face we do not see,
those our parents and dear ones too,
seldom we distinguish between colours
all remain the same in our terrain;
Yet we imagine vibrant flowers
beauty of moonlit nights,
butterflies or dancing peacocks,
stars or splendid rainbow,
mighty rivers or gushing streams
rocky overhangs or deep ravines
awesome slopes or green plains,
inner light offers us vision. (The World of Visually Challenged Part VI, p.23)

Having said all this to enrich understanding and empathy in us the poet offers a piece of advice to the thinking people:

Visual challenge can be challenged,
make sure your eyes do not die with you.
~*~
You can show us this world, if you so wish
You make a difference for us, if you so decide
Your eyes can live longer than you, if you so desire
They don’t perish with you, if you so choose. (The World of Visually Challenged Part VII, p. 25)

There are people who after reading these lines can visualize the hard reality of being vision impaired. Eye donation is being widely publicized by organizations and institutions. The poet has rendered service enthusing the understanding, god-loving and god-believing.

The rest of the collection, about the inner sight and insight underline the quality of empathy, karuna, and aardrata the basic motherliness of the understanding and imaginative. This poet has delicate sensibility in enjoying euphony which she calls the magic of music:

As wind makes the flames dance
my aged limbs acquire sheen
hearing the mellifluous tune
flows on the wings of breeze,
it just affects me blissfully,
I dream if could cuddle it. (The Magic of Music, p.28)

It is common that some times people fall into a kind of ennui and this poet is no exception.

Silence sits upon my shoulders
for quite some times now.
I plunge deep into the blurry emptiness
Where I see dead words
Beneath the river of my life… (River of Emptiness, p.30)

We live in an age of decadence. Values are set aside, almost buried. The poet is painfully critical of the political realm which is a shame on the human race.

How many more girls have to be put to sleep
before we wake up?
If the fire station itself is on fire,
Who can douse the flames? (Abhorrent, p.30)

A sensitive woman and a faithful wife feels utterly lost when her hubby turns alcoholic. However at no moment would she become loveless:

Even when my wings lose their charm
or my stay with you turn unpleasant
or even my existential form stands bulldozed
my absolute love will linger forever
to fill aroma of life
in each pore of your being. (Say ‘No’ to Alcohol, p.33)

Murders are crimes too though called with pride honour killings:

… the word ‘honour’ having lost its honour
it pleads to be deleted from lexis
cringes and cries to coin another word
to describe values to be truly valued
and waits for a decree to be heard
from the ‘honourable’ juries of the land. (Honour Killings. p.38)

Extraordinary happenings upset the serious minded. They are very sad when the innocent get convicted and put to death wrongfully. A Chinese teenager was executed at the age of eighteen. He was declared ‘not guilty’ eighteen years later. The poet writes:

His fragile parents hold back tears,
set on flames on his tomb
the proof of his innocence
served by the court
after eighteen years of struggle
fought by them to the bitter end.
Did their tears represent joy or sorrow?
Not sure; but the wandering soul, happy,
greeted it with gratitude, settled down. (Wrongful Conviction, p.52)

Even in this ‘modern world’, in our country puddles on roads in cities and towns are ubiquitous

The mud road
that snakes through the village
is familiar to me
like the back of my palms.
My feet have measured every inch of it. (A Predicament, p.60)

A poet’s inner vision sees what even the sun cannot. This poet talks of bees the male and female. The queen bee flies off snatching the genitalia of the mail. The poet’s conclusion thought provoking:

Despite deceptions, a sacrifice
too great for small life.
May be drones were rapists
in their previous birth. (Italics the reviewer’s) (A Gloomy Suspense, p.67)

The poet thinks of tsunamis as the sea’s blues. She grins for not being able to do anything. There are many poems which have the poet’s signature tune, motherliness.
Bemoaning the lot of prostitutes the poet uses powerful expression:

Her body remains a battleground
torn to shreds by nocturnal tropes,
it can’t resist the violence
nor perform below the norms
pain invades both the body and the mind. (Dark Mysteries, p.74)

There is poem about guests and hosts and the hungry plight of the kids left in the lurch.

Let’s have some fruits before lunch, Dad says
His fingers fill up the gaps between those of Mom’s,
looks at her with a furtive smiles, her eyes downcast.
By then my stomach makes accord with its agony. (Harmony, p.77)

The poet has sleight of hand: wears many garments and does several things with gumption. With powerful and skilful hand one can be an explorer, a saint, a magician, a craftsman, a painter, a gardener, a guide and all. The poet, Pankajam here, concludes:

Poets; indeed you are
messengers of warmth
with melting hears
All one visage! (Multifaceted, p.87)

Towards the end of the collection there are many poems on motherliness and titbits too to mothers of girls:

To bring up your girl child
mothers, be the one blessed
to keep your eyes forever awake,
remain alert even in sleep
~*~
Help her build confidence
through the art of self-defence,
make her strong and bold
both in body and mind
and let her understand
‘weaker sex’ in not at all a word.
Keep a pouch of chilli powder
or pepper spray hand in her bag
to be used in a crisis to unarm perpetrators,
remain safe till help arrives
and above all you stay updated
on rights and remedies offered. (To Bring up Girl Child, p.99)

Don’t think that this is the end. There are many more. The poet deserves high praise.