The Power and Glory of Ma Durga

Theists believe in the Supreme Power as the basis of all creation, maintenance and destruction of all things and all beings in the universe. We believe in the Divine and we worship the Divine, Supreme Being. Supreme is the term for Brahman also. The Upanishad defined it as Brahman, the one without beginning or end, the limitless. Jnaana is the quality and state of knowingness.

Truth, Beauty, Goodness, Light and Joy are all aspects of the Supreme. We believe that Existence, Knowledge and Freedom from grief alone are the manifestations of the Supreme Being, Brahman. Brahman is without quality or appearance, Nirguna and Niraakaara, without alternative, and from that alone Maya has taken birth. It is the prime reason for all worlds and the universe including the power that sustains all. Maya (great illusion) and Brahman are Dharma and Dharma, masculine and feminine, the indivisible, same. They are also called Prakriti and Purusha (broadly the Female and Male principles). 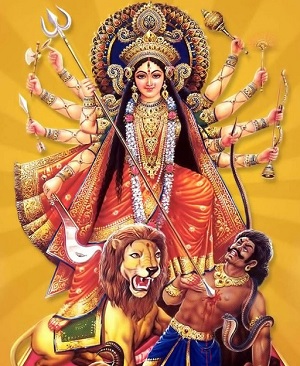 The mother bestows all attention on the child, sustaining and fostering the offspring. It has been our tradition to worship Prakriti, the female principle. The Supreme Lord is looked upon in the shape of both Prakriti and Purusha. The Supreme Mother is considered to be the source from which all energy and powers flow. People like us, for ends both mundane and other-worldly, worship of Prakriti is essential. Ma Durga is called Stree Vidya also. That is the worship of Lalita and Shakti. Both are the same: only the names and forms are two: in fact there are many describing the same Supreme.

Lalita, is based on Panchadasha Mantra with fifteen aksharas (letters). Shakti is worshipped with the Navaakshara, nine lettered Mantra. The description of the power and the glory of Shakti in seven hundred shlokas or hymns, is called, Durgasaptashati and also Devi-Mahatmya.

The basic secret is described thus: Mahalakshmi is the source, the beginning of all creation. She is the norm and the illustration, the means as well as the end. At the end Ma Durga has qualities of masculinity. First She took the shape and hue of darkness and came to be called Mahaamaya, Mahaakaali and Mahaamari. Then She took shapes and came to be called Mahavidya, Mahavashakti, Bharati, Vaak and Saraswati. She creates three Gunas, prime qualities. Rajoguna, the quality of redness, is their basic nature. The Taamasika, dark, black natured Mahaakaali creations are, Rudra and Saraswati. They are white in radiance.

The ones created by Mahaasaraswati are Vishnu and Gauri, hued black. Thus from the feminine the masculine emerged. Brahma, Vishnu and Rudra carried out the functions of Creation, Sustenance and Destruction of the entire universe and everything, living and non-living in it.

Durgasaptashati, from the Markandeya Purana, deals with a description of the effulgent acts of the Supreme Mother. A mere reading of it in a devout frame of mind has an ennobling influence. The present work aims at giving a simple narrative of the event described in the first part of the Puraana, the epic.

A reading, repetition or contemplation on the power and glory of Devi, Shakti or Durga would bless us with peace and joy. In the eon of Swarochisha Manu, King Suratha was the monarch of the entire earth. Being benign, he became an enemy to the demons who later defeated him in a battle. On returning to his capital his wicked ministers robbed him further. Suratha retreated into a forest where he saw the hermitage of a sage and seer called Sumedha. The great sage lived in friendship and harmony with bird and beast too. He gave the king asylum.

After sometime, the king fell into a kind of myness (Mamakara) and began worrying about the court elephant and his treasury. In the vicinity of the hermitage, the king ran into a Vaishya who introduced himself as Samaadhi. He was born into a rich family, but his wicked wife and children turned him out. The king wondered why he should worry about such wife and children. The Vaishya expressed his helplessness in not being able to be hard-hearted.

Makandeya, the accomplished Muni, then narrated how the two went to the sage Sumedha. The king entreated the sage to tell him why his Manas had been getting out of his control. Though he knew everything, he was worrying like one ignorant. Sumedha explained to him that man, bird and beast alike are thrown into the pit of Moha wherein there is the whirlpool of myness. Under the influence of the two, they fall into Samsaara, which is the making of Mahamaya. The whole creation of the living beings is thus enticed.

Mahamaya renders even the knowing one helpless. She is the creator of all animate and inanimate things. If propitiated, She blesses human beings with salvation, liberation from bondage to Maya. She is Parama Vidya, the ultimate knowing, learning par excellence, the reason and means for salvation, Mukti. She is responsible for the bonds of Samsara.

The king then asked the sage for the details of that Mahamaya, Her work, Her power and Her form. The sage (Sumedha) narrated the tale of the Devi killing the demons Madhu and Kaitabha thus: She is everlasting and all-pervading. Mahamaya is Ma Durga’s incarnation. She took the incarnation to help the cause of the angels, Devatas.

At the end of the big eon, Kalpaanta, Lord Vishnu lapsed into slumber known as Yoga-Nidra, purposeful, divine sleep, making the serpent Adisheshu his mattress. From out of his earwax the demon duo, Madhu and Kaithabha were born. They set out to kill Brahma, the Lord of Creation. Noticing this, Brahma went on invoking the aid of Yoga-Nidra stationed in the Lord’s eyes. Yoga-Nidra is the protector and the mother of the world. She is both the sustainer and slayer. Brahma extolled Ma Durga thus: “Ma Durga you are Swaha and Swadha. You are the form of all fire rituals and you are Salvation. You are the Everlasting. You are Pranava with the three segments a, u,ma. You are the unutterable half sound too. You are the dawn, the sun and the Para Devata, the ultimate of all deities. You wear the universe on Your person. You are the Creator and the Destroyer. You are the manipulator of everything and all in the world.

“While engendering the worlds, You are the Mother, while sustaining everything, You are the Ruler, and the while putting all to rout, You are the Destroyer. You are all learning and all skills: the intellect, Mahaa Buddhi, the intellect along with intelligence par excellence, Mahaadevi, the Supreme Mother and Maha Asura Shakti, the power par excellence. You are Nature, the reason supreme of the entire creation. You are one inhering all the three, essential, primal qualities Gunas: Sattva, Rajas, Tamas, symbolically the white, red and black. You are all the three terms of darkness, the Kaalaraatri, Kalpaanta pralaya raatri and Mahaamaari at the time of the deluge.

“You are intellect with the quality of preaching. You are shame, You are contentment, You are peace: You are tolerance. You are the one with the frightful weapons: the sword, spear, mace, the trident, conch, bow and arrows. You are the auspicious icon, benign and beautiful, the very best among the best, the most compassionate and the most benevolent among the benevolent. You are all shapes and all forms. How could I ever praise You! The Lord, the Creator, the Sustainer are the Destroyer too. How can I ever praise You adequately! Vishnu, Shiva and I, Brahma, all the three of us are shaped by You.

“Who can praise You adequately! You are praised thus for Your benevolence and compassion. You can entice the otherwise indomitable demon duo, Madhu and Kaitabha in Your enchantment of attachment, Moha. Wake up Lord Visnu! Inspire Him to kill the demons. Brahma thus prayed Devi, who was in the form of Tamas, to awaken the Lord to kill the demons.”

Coming out from the seat Vishnu gave audience to Brahma. The Lord of the Universe got up from his serpent couch and saw the demon duo terribly strong with eyes glowing, blood red. He locked them in combat and fought for five thousand years. Then Madhu and Kaithabha were engulfed in the great illusion by Mahaamaya. The two in great pride asked Vishnu to seek a boon from them. But the Lord asked them to ask Him for a boon. The ignorant demon duo knowing everything would be overtaken by the deluge asked the Lord to kill them in a place not wet with water. Lord Vishnu agreed and holding them to His middle, cut their heads off with His wheel.

The reading of this is very first chapter in Durga Saptashati is propitiatory. Reading this sacred text secures devotees Ma Durga’s blessings.