Pulsating and bubbly
Was the gait of my poetry,
And now and then
It would twirl and pirouette
Making me feel
On cloud nine. – My Poetry 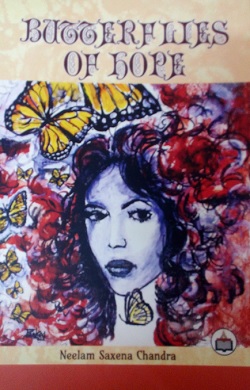 After taking a snappy look at the content, I asked the poet herself whether the poems came first or the painting and was told the painting was hand picked just before sending the script of the compositions to the press. The title for the critique in the Literary Shelf flashed then that very moment. Poets have a way of telling the readers what they thought of what poetry is or should be in their own poems. Here is a poet who never tried to rush to print. She has chosen to wait for fruition and displayed her mettle at the right point of time. There was a saying, of course, in another context but always just and memorable: ‘Discretion is the better part of valour’. This is surely a vantage point.

Neelam Saxena Chandra has been looking inward and beyond, as you see for yourself, dear reader, forging ahead. Epigraphs are for signification, indication of things coming up or coming out, if you prefer. The title is about butterflies basically. That they are of Hope comes later. Some thoughts begin with the small and short period of childhood. We remember this when we come to the poem towards the end of the volume and it sticks in our minds too.

The sea sets a mood in a sensitive and imaginative mind. It brings joyous feelings and contributes to tranquillity. The sea shore is a suitable location for poetic sensibility.

By the scene’s splendour mesmerized
I drop all my masks and veils;
And like an enticed maiden I swallow
Sanguinity from the life’s pails! – The Seashore

Light has a distinctive quality to elevate the level of imagination. One of the precious tendencies that light provides is showing the path and guiding to scale ennobling heights. Neelam wrote another poem calling light blissful. She says she gets recharged, shimmering like light itself. Active imaginative thinking energises and the moon is called the yellow orb releasing cosmic energy.

The light
Can neither be seen
Nor felt, nor envisaged;
It has to be carried
In the heart. – The Guiding Light

One of the frequently brought in themes in the poet is love. It makes her have faith in the dictum amor vinkit omnia, loves conquers all. Love is the solace and peace giving sensibility. Discomfort and disturbance creates a condition which causes turbulence and even pandemonium, a situation of lawlessness which the poet calls anarchy. With affection love is called the little thing. The poet uses the expression of being recharged, shimmering like light itself.

Here is a poem about another natural phenomenon, rain. It leads to philosophical thoughts. Active imagination gives energy and the poet calls the moon the yellow orb and is thought of releasing cosmic energy.

Paradise thought gained
Was paradise lost––
And the feelings bereaved
Without a murmur
Or even the sound of hoofs
Of the wind. – Outpour

Love is one of the frequent themes in poetry everywhere. It is the solace and peace giving thought. Discomfort and unpleasant feeling creates a condition of powerful turbulence. It is called pandemonium itself and a situation comparable to anarchy and lawlessness. The poet calls love affectionately ‘the little thing’. The poet also sings of connotations of love. The seasons and the divisions of the various periods of the day, the moon, noon, eve and night are called metaphors and they too connote love by changing. Everything around, within and without is love in one way. Rainbows are symbols of love though they vanish suddenly.

In the entire tale
Of anarchy and pandemonium
If there is anything
That solace brings,
It is that little thong
Called love. – That Little Thing

Particles of darkness are likened to parasites. They suck away joy and what is more create darkness which is death itself.

Particles of darkness
Like parasites, cling on
Sucking away happiness
… … …
They only vanish
With the inevitable
Called death. – Particles of Darkness

Life is having the feet between life and earth in the envelope of air. This gives glee of various types making the speaker proud of her existence. Hence she calls it “my moment”.

The feet are not on the ground
Between them and the earth,
There is an envelope of air of glee
Proud it makes me
Of my existence. – My Moment

The poet has thoughts philosophical most of the time. One of her ideas is that life and living go along with vibrations of metaphysical thoughts in the poet’s imagination.

The success of living lies in its being good. For getting goodness the person must have the capacity to change the actions to be a better human being. But some things is us, humans, unfortunately make us think that change is not possible. The mind becomes stubborn and not changeable.

The poet is devout and thinks, believes and trusts in the creator. Faith and devotion are intoxication as it were. This is given or made by Him. All this is the tendency of this poet’s poesy too.

There was poesy
Even in the messages
That you often sent to me
And I would dance to tits tune
As if under the influence of some intoxication ––
Your intoxication! – Poesy

The philosophical thinking goes on and on. She says things happen according to the prevailing conditions and situations. It is not possible for man to apprehend with reason and a sense of judgement to guess. But it is true that everything happens or happened for a reason.

If only,
One could understand that
Everything happens for a reason… – A Reason

Sense of judgement has to be cultivated for happiness. Rational thinking and reasoning as to what has been behind an act is important for personality forming. Defining one’s self is looking at one’s own self. It can lead to the reasons underneath which is generally acknowledged in wisdom as ‘Maya’. Illusion is common.

It is not the act
But the feelings
Behind the act
Which are more important;
And the act –
Is just a bye–product.
... …. …
Where am I?
In an illusory world
Called ‘Maya’
I think I am—
But after all
It is a mirage. – Defining Myself

Tears are an expression of a sense of feeling for a reason or for some occurrence. Tears are not always a waste. They are usually a way to express one’s own pain, anguish or sense of defeat or some such thing. If one understands, one gets blessed and transformed with strength or energy.

These tears shall soon get transformed
Into illimitable energy
Which shall flow
Into my pen
And make me express
My anguish … – For Whom Do These Tears Flow?

The poet looks inward and psychologically becomes stable. As a woman she understands the immense use of love. He or she who loves lasts not merely the one who laughs. Treated with care and love, she is an angel, a goddess, a saviour. Otherwise, night, darkness called lacklustre.

If you mix me with love,
Blend me with care,
Fuse me with fondness,
Amalgamate me with affection,
Mingle with admiration,
Assort me with adoration,
Intersperse me with compassion,
Then I will be a kaleidoscope –
Colouring your canvas
With vibrant and vivacious hues!

Otherwise
I am a lifeless and lacklustre night … – Woman

Swans are always lovable and loved with intensity. They are described as ever happy and ever beautiful. They go on living for the present moment only – not a moment of the past or of future.

The Swans ….
The beautiful swans …
… …. …. …
They desired nothing more and nothing less
They lived in neither the past nor the future,
They lived
In that day
That moment
That instant
And were mist satisfied. – The Beautiful Swans

This is about the poet’s inward thinking which reveals her mental makeup. She is a devotee and always god loving. This is, as said earlier, her basic theme as love and righteousness are.

From where do the melodies erupt?

I think my melodies emit
In your affable presence dear sweetheart
Reverberating my love for you
And then percolate the entire universe. – The Melodies

Next to the butterfly, the most evocative to this poet is her attraction to the peahen, significantly not the peacock.

She sways to her happiness
In complete zest and zeal.
She is neither in love
Nor does she dance to attract;
It is own spirit
That makes her feel divine.

If you ever want to dance,
Dance like a peahen. – The Dance

The thinking person she is, she reveals herself in almost every poem she has written. The phoenix trope is one of her best self–expressions.

Hey! So foolish I am!
Am I afraid of the white hair?
Or the losing of my teeth?
Or the withering of my memory?
But why should I
After all,
It is only my body which can age,
But not my spirits and my soul.

And even if my body mixes with the sand,
My soul shall rise again
Like a phoenix. – Time

The poet’s plea to the butter flies centre comes from her heart and in fact butterflies are the heart of the matter.

Oh dear child!
Please, please do not catch me!
Ah! For you
Just a butterfly I am.
Hold me by my wings, you shall
In a bottle deposit me
For breath I shall gasp
And then die. – Just a Butterfly

A devout and sensible person is always thankful for being a human and not born as an asura. The thought, the poet feels, makes her close her eyes with deep gratitude and energy swarms around her. This comes because of the proper perspective she has thinking of creation and the creator and the result is that things shape out well.

However, blessed am I
Not to be born as an asura
And in gratitude, my eyes I close
Till an energy swarms around me. – The Wounds

The poet’s personality is seen in every devotional statement she makes in her writing. She describes here her desire ambition and the progress in her journey god ward. The words she uses convince us that she is inward looking.

Satisfied,
Quenched,
Illuminated,
Serene,
And energetic
Is how I feel
As I dissolve in You
Pint by pint – Dissolving in You

About  Neelam Saxena Chandra:
She has a B.E. (Electronics and Power), PG Dip in IM&HRD, PG Dip in Finance and has done a course in Finance from London School of Economics. Her publications are, two novels, a novella, five short story collections, seventeen poetry collections besides nine children’s books. She is a record holder with the Limca Book of Records for being the author having the highest number of publications in a year in English and Hindi (2015). She has won an award in a poetry contest by American Embassy, Premchand award by Ministry of Railways, Rabindranath Tagore international poetry award, Freedom award by Radio city for her lyrics and II prize for her poem by Poetry Council of India, 2016. She was listed in the Forbes list as one of the most popular seventy–eight authors in the country in 2014. She has two novels still to be published. She is working as Joint Secretary in the Union Public Service Commission.