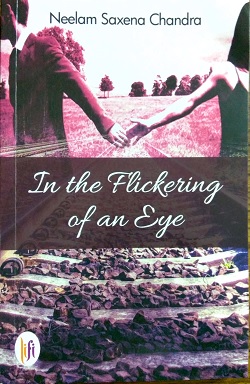 For a maiden attempt at producing long fiction this novel under review deserves appreciation. The reader at first is expectant when he begins reading about Kalimpong, New Jalpaigudi and even Gangtok and Sikkim. However his thought processes get kindled on page ten. To a question, “Where is she now?” the protagonist’s reply reads “If only I know where she is (and hitting the table with his fist he says loudly) “I have searched everywhere daju (elder brother) I have searched every where. If I cannot find her in twenty five years, three months and fourteen days I will never find her.”(p10)

But by so many turns and twists, many miracles and dues ex machina the duo get married and the reader puts down the book thinking that there people with tenacity and high principles. The reader says: ‘all’s well that ends well.’

The young man Vinay called Vinnu land the young woman Manju in their teens fall in love and they realize that they cannot marry because there were born in the families of the same gotra. But love is blind and absolutely personal. The story line, as in many stories, is gripping with many miracles, sudden twists and turns with melodrama appended causing gasps in the readers.

Vinay, at the start of a novel, by then a successful writer, is given a manuscript novel for comment and guidance by one Anuj. The story is about Anju’s protagonist who wants to marry a girl of his gotra, ancient lineage of a rishi. Marriage of the same gotra bride and groom is prohibited by custom. The script is about a young man wanting to marry a girl of his gotra. Vinay tells Anju “Vinu did not die, Anuj. Neither did Amanju.” (Page.5) Vinay while being a teenager tells himself:

Manju runs away from home and in the concatenation of events on the train a couple takes her home and their so long refusing to marry agrees to marry her and she becomes the wife of a hotelier in a hill station. On the death of her husband she owns and manages Hotel on the Ridge. Vinay (after several years becoming a successful writer and a PhD in English Literature, by a miracle, (call it dues ex machina) and at the end hears the woman sees her (Rohini) in her delirious state goes on calling his name. Though after twenty five years they get married and LOVE WINS! We are shown the ways of the village panchayats and the stubbornness of long married husbands and the patience of wives. We are shown how the love tangle gets tight and tighter and ‘filmic’ miracles happening with good Samaritans springing up suddenly in trains and making readers gasp (that is the thrill readers want, wish and enjoy reading).

We are told that stories may not have either hands or feet and so it is in fiction. But what matters is crisp, fast happening occurrences with wondrous suspense and episodes tragic, comic all exhilarating and pleasant.

I remember Sisson L E who wrote an article (in the Atlantic Monthly), several decades ago) on reviewing where he used the phrase ‘fishing; in a barrel’ a thing to be avoided. Then the blurbs on the book which are best read after reading the text or its review. Both these are for ‘freshers’, read beginners, in the practice of reviewing. Then the two most important things, copyediting and proof reading, which are left to the publisher who is not totally dependable since they are serious professional activities. Some easily correctible errors need to be mentioned since the book is likely to go into another edition soon given the writer’s aplomb and the grit. “Flickering an eye’ is heard in the protagonist’s speech but it may be acceptable as a habit of the character. The, there are not easily acceptable things in print, like alright, firstly, caught in the wrong foot.

Neelam Saxena Chandra is sure to come up with another jolly book of fiction. The blurbs by Bollywood big wigs along with the Art Writer augur well.