For Victory in the Battlefield 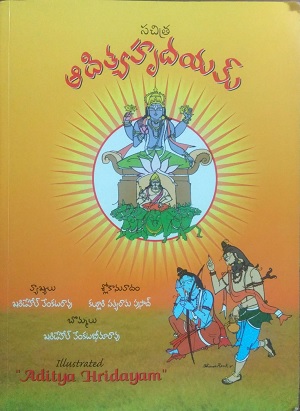 The Supreme Lord takes a different incarnation in each aeon, yuga. Krita or Satya, Dwapara.Treta and Kali are the aeons described in Hindu faith. Sri Rama is the Lord Supreme in Treta Yuga where He is the perfect human being. The Holy Ramayana was the epic written by the Sage, Valmiki. Adityahridayam is from canto 105 from Srimad Ramayana, aadikaavya, the earliest epic by the Holy Sage.

Sage Agastya observing Rama in deep thought on the battlefield in the struggle with Ravana gives moral support to Dasaradha’s son in this paean Adityahridayam to the sun god who gives radiance. This great song of worshipful praise is as sacred as is secret.

This book under review is a paraayana grandha, a text for daily reading at prayer time. It is a usually offered prayer to the Sun god believed to be the one prayed for good health. The three, the translator, the commentator and the artist who drew excellent pictures are high grade officers, all now retired after long years of service, commerce, mechanical engineering and E.C.I.L. The slokas are rendered into English by Kalluri Surya Rama Prasad, commented on by Kharidehal Venkata Rao and illustrated by the wonderful artist Kharidehal Venkata Bhima Rao. The work is appropriately titled “Sachitra’, adorned with pictures. The thirty slokas of the hymn are acclaimed as brief, Sankshipta, Bhagavat Gita. The book printed on art paper contains delectable pictures, exhilarating devotional composition besides the original, widely known Sanskrit text. Besides the great hymn devotional prayers like Sooryaashtakam, Suryanarayana Dandakam, Balabhaskarashtakam, Surya Dhyanam, Surya Kavacha Stotram, and Rathasaptamivrtam.

This book has been given high rating and acclaim by holy personages like Sri China Jiyyar Swamy, Swamy Paripurnanda Saraswati, Rishipeetham founder revered Sannidhanam Sanmukha Sarma and Swamini Atmalinananda Saraswati. Many a devotee given to daily prayers prays every day repeating these. Even then, the explication, comment and illustrations by the trio deserve high praise. They brought to their work devotion to the Supreme Deity. Faith and devotion have always been the handiwork of such people who have always been the bulwarks, stays and sustainers of Arsha dharma. This work can rightly be considered a compendium on the prayers to the Sun deity.

Phalasruti, fruit of listening, reading or study of the prayer, is given by the writers at the end of the book as is always followed by devout age-old hymn makers.

Son of Dasaradha, Sri Rama is the Lord who knew the Vedas deeply and extensively. He killed the night-stalker (this is how Ramayana published by Gita Press calls him) Ravana. In Sri Rama’s heart and soul all the Vedas have been always held in the highest esteem and preserved for all time.

Surya is the sun deity who sustains all creation. He is the one who blesses us all with knowledge and salvation. He is one who washes away all sins and to Him we bow in absolute supplication.

The pious repetition of the study leads to the growth and progress of the devotee and would contribute to the plenitude of crops, the welfare of women, and all things precious, holy and joy giving.

Devout house holders would do well to have this book near their seat for daily use in their prayer rooms.