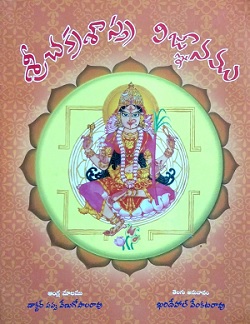 This is the translation of a very valuable holy text on Sri Chakra, the Navavaranas, Sri Vidya and Sri Chakra, Kundalini, all on the Supreme Godess, Lalitha, also called Tripura Sundari Devi.

While explaining the meaning and significance of the holy paean, the book has also explained the manner of worshipping the goddess with utmost devotion.

Dr. Pappu Venugopala Rao, a student of Maharaja’s College, Vizianagaram, knew and revered Prof. Kharidehal, Venkata Rao. Venkata Rao had the beginning of his academic career in the same college during the mid 50’s of the twentieth century. By dint of his studious habits and scholarly nature he quickly scaled great heights becoming a professor of commerce in Singapore and later a member of the faculty on the Administrative Staff College, Bella Vista, Hyderabad.

Now an octogenarian, coming form a devout family, he started studying and rendering translations from our holy and spiritual texts like the present one. He brought out many scriptural texts. The delectable paintings in the books are by his cousin, Dr. Bhmarao, (also a student of MRC) a retired scientist from ECIL, Hyderabad.

There are very few academicians in the field of science who take to studying with devotion our sacred texts. Ma Bhagawati is the most intensely worshipped goddess. The human body is a great vehicle for growth having Shatchakras : Mooladhara, Swadhisthana, Manipura, Anahata, Vishuddha, Aagjna, Sahasrara. Goddess Lalitha Parambika is worshipped singing her myriad names in deep devotion. The six chakras in the human body spread several kinds of power (Vidyut). These chakras generate Pranavayu, scientifically from the pancha bhootas, five elements, Earth, Water, Fire, Air and Aakasa which are related to the shat chakras. There are navavaranas (nine surrounding circles) related and worshipped. The great devotee-poet-musician, Muttuswami Dikshitar, sang the praises of Ma Lalitha in nine different ways, which are called the “Navavarana Kritis”. All these are in deva bhasha, Sanskrit. Though devotees pray and worship the mother sincerely many do not know the exact meanings of these Kritis.

Prof. Ventaka Rao in his introductory dedicatory note thanks his guru for the help he received from the highly revered Sankrit professor, Sri Appala Someswara Sharma, who started his academic career in Maharaja’s College. Later he moved to Andhra University as Professor and Head of the Department of Sanskrit. He went through professor Rao’s Telugu translations. This immensely added to the knowledge of devotees who worship the Mother in deep faith.

The original writer Dr. Pappu Veugopala Rao wrote extensively on the worshipful ways of offering obeisance to Devi Lalitha. In an appendix Muttuswami Dikshitar’s nine kritis are given and explained. There are three musical deities in the South, Thyagaraja(1769-1847), Shyama Shastri (1762-1827) and Muttuswami Dikshitar (1775-1835). The trinity offered praise and worshipped the mother in lyrical Sanskrit.

This book remains highly adorable for the devotees of sublime goddess. The work is extremely faith-deepening and hence laudable. Readers would bestow all praise for the original writer Venugopala Rao and the Translator Venkata Rao.

Glory to the Sublime, Heavenly Mother.