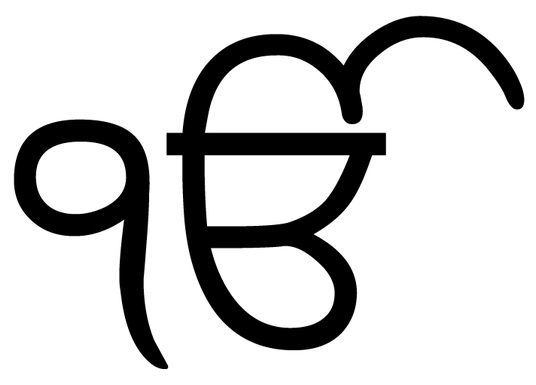 It is time to celebrate the creation of Khalsa at Anandpur Sahib by Guru Gobind Singh Ji on 14th April 1699. On this day at the special invited occasion Guru Gobind Singh Ji gave a clarion call of “I want one head” to the assembled audience. We are not going to go into the details of what transpired their on that day, suffice to say Guru Ji was looking for those who did not have fear of death. He got five volunteers who offered their heads one by one into a separate tent. Guru Ji initiated them into the order of Khalsa with Amrit.

This Amrit used in the initiation ceremony was prepared with stirring of water in a Batta (bowl of iron) with a Khanda. While stirring with the Khanda five banis – Japji Sahib, Jaap Sahib, Tav Parsad Saveeyae, Chaupai, and Anand Sahib were recited. These banis transformed the water into amrit. So today on this occasion let us refresh the history and our understanding of these five Banis.

Brief Summary: This bani starts with an invocation of Almighty and is called “Mool Mantar” wherein the form of Creator is described. The invocation is followed by the title of the bani, a salok, 38 stanzas (pauries) and the concluding salok. In the concluding Salok Guru Ji summarizing the entire Japji Sahib. The bani starts with a question on how to become truthful then provides the steps towards union with Truth. Therefore each stanza is called Pauri or a step on the ladder. The aim of Japji Sahib is the integration of body, mind and soul.

Guru Gobind Singh was a worshipper of one God. This is clear from the very first stanza wherein attributes as God is Formless, Unborn nor dies and is Eternal are described. He is Self-Existent, has no father, mother, brother, wife, daughter or son. He is the Creator of all and everything. He is All Wisdom and the Source of All Virtues. He alone is the Giver of everything to the creatures. Guru Ji says understand the fact that god has no name but is called by various names by devotees based on their experience and the blessings they have obtained from him. This composition has 199 stanzas.

Brief Summary: This composition has ten quatrains. In the first quatrain Guru Ji shares that he has seen the so called religious folks of various creeds and faith but found them lacking in devotion to Lord of life. Next Guru Ji talks about folks with extreme wealth, power, powerful rulers, conqueror of lands, ritualistic and formal religious practices, religious leader, powerful wielder of weapons who can shake mountains yet themselves remain unshaken, fearless mighty heroes, after describing about each of them Guru says none really matters. Then he declares that the actual thing to be done is to love God and His creation, thus realize Him.

The composition starts as a supplication that asks for blessings and protection from God. Then Guru Ji prays that may all my desires be fulfilled, and obtain God’s Love and Mediation, destruction of sinful enemies. The heart’s desire is that my heart may be at your feet, and you nurture me as your own. Then Guru Ji asks for freedom of all fears including death.

Brief Summary: This song of bliss is musical masterpiece of Guru Amar Das Ji and it consists of forty stanzas. The Anand is both inspirational and philosophical in its content. It details the pilgrim's progress and the obstacles that lie on the way. The ultimate goal is for union with the Supreme Reality. The Anand reassures everyone that they can experience both joy and bliss, without sacrificing the normal comfort and pleasures of life. Bliss is the destiny of man, pain and suffering, though unavoidable; do not disturb the inner peace of that person who leads a purposeful and pious life, by obeying the Guru's discipline.