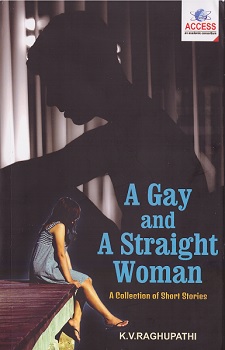 This book under review is the second book of short stories (the first came out in 2016) by the reputed poet Raghupathi. Being a poet of high renown in very deep philosophical thinking, one may look around a little more widely band come to give a touch about the worldly. The world shows the seer – the one who sees – deeper dimensions of life and living which add a tenor of meaningful thinking.

Now it is established that Raghupati’s stories have a distinctive quality which I call Raghu Mark.

Terrible misfortunes make a person’s mind soft and deeply understanding. A poet who is religious and god-ward thinking may quickly become a story teller with highly emotional writing.

In this collection, again, there are eighteen stories – all very brief – some times, in less than three pages. Shocked knowing her husband is a gay, a woman studies law and becomes a lawyer feeling that at least her clients would be her protectors.

The story ‘Three Cheers for Shobana’ is about a woman who wanted to have a daughter while her husband wanted a son. But she had a son only whom she named Sanju, who had cerebral palsy, mental retardation, and heart disease. But she teaches her teacher how to accept whatever had happened in life with a sense of equanimity without complaints; how not to be upset.

There is another story of a woman who said that she had been living alone for the sake of her child Ganesha who had an incurable condition known to the doctors who called it microcephaly. The story is called The Untouchable Ganesha. Till the end the reader cannot even guess why he is called so. When asked to be taken home, she took him and showed the photo taking it from a box covered with a brown cover.

‘Survivor Sunder’ is about a man who had hemophilia, a rare bleeding disorder. Kalpana, his wife, delivered an under weight child and her husband did not accept the child who died soon. Most pitiably Kalpana’s doctor told her that she would not have any more conception as her uterus has been afflicted with cancer.

Senior students in medical colleges and doctors may either be perturbed, dissatisfied or get wonder struck reading the various ‘medical’ things the writer has written about.

Raghu has a flair to make animals central characters of some of his stories. It was a piglet in his first book. Now, there stories about a dog (Ellapa) , another on a tiger in ‘Govinda Roars of (sic) Freedom’

Being first a student and later an academic in the University of the God of Seven Hills, the author has waded through the skirmishes of the staff and hardships of helpless students in some departments. ‘Scholar Lunatic’ is a case in point. And then in the story ‘The Unfortunate’ when the narrator, the story teller ‘I’, is a typical Raghu character. He asks the ‘unfortunate’ one “How did you get your Ph.D.?” and is told “That was another interesting story.”

Some of the stories read like diary jottings, like for example, ‘Perilous Day’. There are mystery stories and nightmarish ones too. ‘The Little Boy and the Seed’ is one such. Nightmares could make dramatically interesting reading as the story ‘Wrong Message’. ICU, catheters, clinical operations and things like tarantula, a poisonous spider would be wonderful reading. Smart phones could cause a deluge though exhilarating first. The Principal of a school in the story ‘The Happy Child and the Smart Phone’ is a good Samaritan and great hero.

Many as in the earlier one of Raghu are self stories, autobiographical as in the “Untouchable Piglet”. Little children are plot bases as in ‘Little Parthu and Toys’ and ‘The Little Boy Bhargav’. Some may be concocted but which story is not?
There are funny stories too like ‘The Young Man Who Bought His Own Old Clothes’,
which may be considered moralistic too.

Caste prejudices are an interesting aspect in Raghu’s writing and ‘Abhishek and Nadaswaram’ is one such. Is it really true? Some may ask closing the book.

By way of an apologia I quote this as Raghu’s predilection:

If you want to come to the lime light, you have to do two things as a writer. One is, you should have written something controversial. Some such stuff to come into the limelight. Criticise some caste group, its age old practices and customs; or attack the ideology of a political party; or some religious tenets and doctrines. Overnight you will become a celebrity. Two, you should have written something sensational to please the young in universities and colleges. This kind of stuff is much liked now. If you write something sentimental, nobody would take it up for publishing and nobody will read.”(p.76 of The Untouchable Piglet)

It is interesting to notice that the endorsement on the blurb has been from the Managing Director of the publishing concern, Sudarshan Kcherry of Authors Press, which brought out the book.