Doc. as Poet - Romantic and Pensive 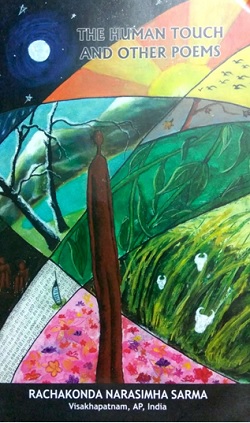 A languid dream
In chocolate and cream
A poem in pastry
Wrapped in silver tapestry
Even on day of birth
Was I really worth
Such an ecstatic gift?

The book under review is a collection of ninety- three poems produced by a nonagenarian doctor who avers that the poems have been written sporadically over a span of sixty-five years differing widely in content and quality. He also tells us that many magazines have published these poems: Lynn Sunday Post, The Daily News, Lynn, The Patriot Hbg: The Sagar Time Encore; New Mexico; Triveni. Jayanti, Poetry World, Indian Literature, adding that there have been many other magazines that have escaped his memory.

Dr Rachakonda Narasimha Sarma, is a poet of eminence and he reveres poetry which has been his predilection. Any profession envisages retirement but love lasts the whole life time. The poems in this collection were written during the last sixty-five years. Things written long ago may now appear silly, uninteresting or even insipid. But the quality of good poems is different: age cannot wither nor custom make them stale. This is so when love is an inspiration delectable.

Intense, tender and hearty human feeling is there all along, the angel in every sense, exuberant and soul-stirring. Profession and passion are different. This medical doctor treating patients, outside the theatre and the ward this person is extremely sensitive and ever thoughtful with extreme delicacy. As a lover in romantic exuberance he grew and grew and grew, never getting insipid. Like Burns’s Sarma’s amour is like a red, red rose newly sprung in June. And, for that reason it is ever lasting.

The warmth of summer and tenderness of spring;
Fireside and family love and loyal friends;
A world of letters, expanding science and art.
All these, and more, your largesse to me,
One more I need, grant me the pain of others as mine
Teach me to help the utmost within my reach. (The Human Touch, p.5) and duty minded

Moralistic and duty-minded about things professional and personal, Sarma is large hearted, sensitive and understanding. He loved English poetry to the extent of penning odes on poets like Keats, Shelley and even Shakespeare. The following are the excerpts from his odes on e and Shakespeare:

Shelley of ‘Skylark’ fame
If only you could know
Hardy (sic) wanted dust of the same
Encased in gems that glow;
Because the lark inspired your hart’s ecstatic flow. (Ode to Shelley, p.25)

From the alchemy of your mind
Compounded with passion and compassion
You had minted gold and priceless gems
With which you have
Embellished the Goddess of speech
Beyond belief. (Ode to Shakespeare, p. 26)

A lover of poetry loves poetry written in all the languages he knows. Being a speaker of Telugu, his mother tongue, he loved the founder of PRASANNA BHARATI, Kavisekhara Kondepudi and wrote an adulatory poem on the soul-stirring and mind-captivating poet:

Seated at his desk before the crack of dawn,
With the one and only task of keeping alive
‘Prasanna Bharati’ and helping it thrive;
In more ways than one, reminds us of Hanuman.
Strong in mind and body too, at ninety-two
Stronger still in faith and devotion true! (Kavisekhara at Ninety-two, p.27)

Poets, usually, are lovers of nature. Sarma loves trees, their leaves and the sight of the sun and the moon through them.

I long to see the sunset through the leaves –
Gold and silver shining through the sieves.
… … …
The song of the rustling leaves, rises and falls,
Glides through the room across the walls,
And sends an echoing music in the heart
It never, never, would learn to part. (On Trees, p.37)

Love enthrals and makes one’s sweethearts angelic. Sarma in his collection of poems, titled a section imaginatively and passionately “An Angel in Every Sense and other Poems”. He begins the section with two photographs too, one showing the poet and his wife and the other showing his fair lady’s picture taken in in her ripe and fascinating age in the year 1956. It is a lovely creation, an acrostic composition:

An angel in every sense though reared on this earth;
Never grew up a maid so innocent and wise
Not trod upon this land a softer step;
Attuned to patient care and teaching too,
People concerned her most-not thoughts of self;
Umbrage unknown, or else forgotten soon.
Roses, roses all the way wherever she went;
Not age nor circumstance could wither her charm
All the good she could, she did and none any harm. (To My Wife Annapurna, p.47)

Wonders thus the poet in 1947:
… … …
In short, that essence of sublunary peace,
That supreme radiance that lights the path
Of benighted man and his benighted ways!

Some call it love;
Some others call it
By a not so pleasing name –
To wit – infatuation. (Love or Infatuation, p. 5)

The loving – ever fascinated --- hubby wrote when his bride turned eighty-five:

Verily a time to sing.
It is not always spring
That steals the show
Fall and winter too
Can still
Be the centre of joy. (To Anna at Eighty-five, p.65)

Rachakonda Narasimha Sarma has been an avid and enthusiastic literary translator, though his profession did not spare much time for that tiresomely creative activity. The fourth section of the volume is a selection of only eleven translations of Telugu poems by the greats among the contemporaneous poets like C. Narayana Reddy, Avantsa Somasunder, Turaga Janaki Rani and Sikhamani to name a few of those.

A review cannot be too long and I can cite only one, the poem written way back in 1960 about a class fellow who could not get his MD along with him. This reveals the poet’s concern for friends:

Mine old esteemed and learned friend,
Sad, too sad the latest trend!
Pray, forgive me the long delay
That found me silent and away
… … …
Doctor thou, in every sense but one,
The battle is all but one.
And why, the joy that comes to all,
Comes not to you, but only the gall
Of hapless circumstances and want
Of deserved fame while others vaunt
The smiles of fortune as their own
And self-achieved, though not so known. (A Letter of Commiseration, p131)

When I called up the poet to know about the incident which occasioned the composition, he gave me the name of his friend. It is Dr. Raghava Rao who got his MD degree the next year. The poet told me that he was in the US and could not write to his friend about his sorrow. He remembers that even today. That is Rachkonda.