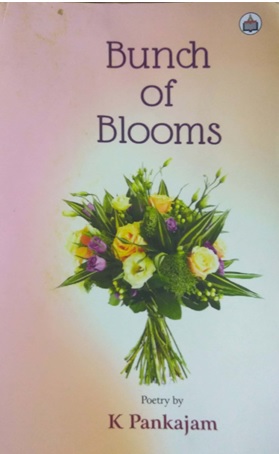 I wish to take a jaunt to night, a solitary state
with no ban, none to warn, an exclusive fete
where me and my thoughts are entirely mine
to be myself to reinvent my lost child in me

Prof Sachidananda Mohanty in the foreword to my book of poems Femininity – Poetic Eendeavour wrote “Rama Rao’s interest in literature includes the sacred and the secular. … he offers an excellent reading of some of the finest women poets from India”. It is the poet Ms. K. Pankajam who enthused me to write a book on femininity. Bunch of Blooms is the sixth collection which this poet brought out. She divided this work into seven parts each started meticulously with an indicative statement along with a title. Endless Endowments is the first with the statement ‘My words want to sing the praise of mother earth’. She must have digested and absorbed Wordsworth’s exhortation ‘let nature be your teacher. In this part, there are twenty-four poems about the various seen, felt and features, birds, the sea, mountains, clouds, the rainbow, moon, night, moths, fireflies and even dragon flies to list a few. All show case delicacy of femininity in all hues and fragrances. Here is what she talks about dusk:

None listens to its silent dissent
and it repeats the same
time and again
without knowing
day grabs glory
for night’s missions. (Dispute Ownership, p.19)

Thoughtfulness and clarity of expression displayed in the poem make a pet memorable. Look at his:

I furtively wear the hat of a poet
to tell the world, truth clothes in lies,
so far unsaid, muted, half-said or shouted,
compels my eyes not to drift off to sleep
nibble at the edges of the pudding of poems
to discover my level of ignorance in making them
and stunned at the fringes of their complexity
… …. ….
To light up the sky and root out
The breeding in adequacies from my mind.
The poet’s eye has an inclusive and fascinating vision
The carnival of light
Lights up my mind as well
Gifts anklets to my excited limbs,
I say goodbye to sleep,
Join the marvel at night
Which is much more elegant
Than what I imagine to be
Or my eyes failed to see. (Fireflies, p.23)

No damsel’s eye misses to have an angelic glance of a woman’s anklets. There is no female who is not enamoured of the bliss-producing jasmines:

… Jasmines intoxicated with moonlight
Want to fly high in the sky
to forget the looming sorrows
till they fall on earth and weep
as they know they belonged to the dust. (Sorrow of Jasmines, p.25)

It is true that it is said ‘dust thou art and to dust thou return’. But life goes and go it would, doesn’t it?

In our culture rivers are goddesses. River Nila called Bharathapuzha originating in Annamalai is raised to the skies when the poet goes to the mythological saviour, Bhageeratha.

Maybe the clouds wait
for Gandharvas
who having denied
space on earth and sky
personify as clouds,
pour down as raindrops
to embrace Apsaras,
the celestial dancers.
But I know
the river is in prayers
for Bhagiratha to come down
and take it to the heavens, (Bharathapuzha (River Nala, p.30)

Grannies are very genteel, affectionate and always trying to teach the young ones they foster and teach them the principles and practices in the art of good living.

The poem on Parijatham tree is sweet. The tree of which wonderful poems and lyrics are penned is the topic in the love pranks of Sr Krishna with Satyabhama. Here is poem on the sorrows and grief of the mythological creation:

Wishes are usually sweet, expectantly gleeful and the poet’s wishes here are immaculate:

Wish I hold a magic wand to ward off evils,
sieve horrid desires from adored ones
purify minds from falsehood and pretence
like chaff from grains in the blowing wind,
drive away ghosts of fears from feeble minds
upon which I discard the wand, no more I need. (Wishes Immaculate, p.43)

Disasters caused by nature and unpredictable catastrophes of nature disturb the mind. Why the sky poured is a section in this collection is not about any that occurred in the past. But when reads a poem on natural disaster one remembers one he saw or read about. In 1993 on 30th Sept there was a killer erth quake in Latur and a killer cyclone in 1994 in Orissa. C.V.Krishna Rao an officer in the government wrote two poems Killari and Idi Pralayam in Telugu brought out as Fiery and Fierce in English in the year 2000. Boloji carried it long ago. Pankajam wrote six poems in the second part of this collection on natural disasters per se. A couple of poems as a sampler here.

Wide spread ruins all over
yet the flood fortified community bonds
humanity and solidarity upheld
brotherhood stood as one, we are one. (We are One, p.48)

A frantic effort to keep alive is described here in this poem:

Floating they went together,
hand-in-hand, not to the capital city
but to a different coast carrying a message
to fortify human bonds,
change the common convictions
and fight natural calamities jointly. (The Mute Messengers, p.51)

The tird section ‘Hearts Affairs’ reveals a truth that love is that as between the poet and the poetry. Here is just one sample:

‘My World’ the fourth section avers that ‘my soul belongs here’. Truly it is here that the travel of the soul begins and here is a truth:

Though in four tongues I read
speak in three and write in two
I dream in only one
the one in which my Mom prayed. (Mother Tongue, p.69)

And there is one on poetry:

Poetry is the progeny
where less said is more
and the more one elaborates
the vaguer it becomes. (Poetry, p.70)

‘Pristine thoughts’ is the fifth section where the poet this down on paper:

Barely any banter can extend
beyond the perfunctory yes or no
or when eyes wander to check mobiles
for messages or mails,
a time to honour untold errands
and say goodbye gracefully
without waiting for fake crisis calls
or unreceptive gestures. (Know the Time to Stop, p.84)

The sixth section is “Tools of Sin’ where the epigraph is ‘Sin has many tools but lie is the handle which fits them all’ a saying anonymous. Here is a pronunciation that does not permit an appeal.

In quiescence, I preach
…. … ….
I want to be independent,
be on my own to boost my confidence
not that I don’t need you,
you can be the shade I embrace to be in light
like the maple leaves to the butterflies in rain, (Being a Woman, p.103)

At the end as section seven there a gift to the reader – a bunch of eleven three liners of which the following is the beginner:

Even sky
sun dips in the sea
with a bunch of roses.

And the conclusion is not far:

Readers surely expect some more collections of the successful poet.