Narratives Ingrained Ever in Circulation

Folk tales are perfect tools to study and explore our ancient traditions and culture in distant parts of our country. Talking about these it is important and useful to consider them in their motifs and types. Prof R V S Sundaram praises the efforts of Antti Aarne (Finnish Folklorist) and Stith Thompson (Thompson believed the folktale to be an important and living art, underlying all literary narrative forms. Most of all he wanted to acquaint readers with most of the great folktales of the world, not only for their own interest as stories, but as elements of culture. He writes about the nature and form of the folktale, gives an account of tales from Ireland to India) with which their book The Types of the Folk-Tale came out in 1928. Folk tales do not begin with a prominent action or conclude suddenly. As the two German brothers Jacob Grim and Wilhelm Grim view, Prof R V S Sundaram propounds an Indo-European theory about folk prose narratives. In that motif index and type index are playing a great part in the study of Janapada, folk stories. Puranas are narrative tales including extra-human devatas, celestials and demons. There are many areas of folk lore, folk knowledge and folk writing and living – all of which get conjoined in the term folkloristics. Folk are not merely villagers. Prof Sundaram quotes what Alan Dundes says: “The term folk can refer to any group of people what so ever who share at least one common factor. It does not matter what the linking factor is – it could be an occupation, language, or religion – but what is important is that a group formed for whatever reason will have some tradition which it calls its own.” 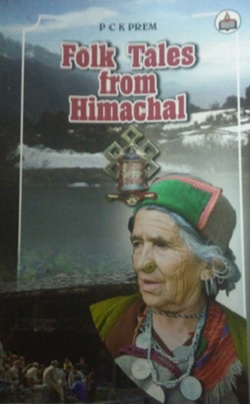 P.C.K Prem’s Folk Tales from Himachal published by Authorspress, New Delhi, 2017 is a valuable book in the area folkloristics besides being an interesting account of various stories in circulation among the folk in Himachal, a unique contribution.

The tales which are in this book are not the writer's creation or imagination. Narration, like teaching is a skill. The tales called Folk Tales are heard down the centuries. These vary from area to area in the same linguistic regions too. Ruminations of the writer make the narrative content thought-provoking. Tales apart Prem has written valid and,so, inspiring articles in his introduction to this collection.

Folkloristics has come to be a new science during the last few decades as mentioned in the earlier paragraphs. Moralizing would be part of folklore. Folklore like Neeti Chandrika by Paravaste Chinnaya Suri in Telugu came in the earlier part of the last century but they may be considered folktales where birds and animals too speak. In folktales talestrees and rocks too speak.

Prem writes in his Acknowledgements:

“Many sources including memory and interaction with different people helped to draw out the relevant material for the selected tales that drove me to grandpas and grandmas and a few old men of substance. I acknowledge erudite input of scholars, editors and compilers of various anthologies on folk literature.

“To remain authentic to the original or orally told tales in local dialects, rendering such folktales into English and maintaining exactness, keeps one uneasy and to this extent, I accept my limitations.

“Folklores and folktales comprise the psychological, cultural and philosophical areas of growth and development, for wholesome ingredients of folk literature stay as a hollowed fulcrum on and around which, the country's culture, ethos and heritage revolve. India is a vast country with a magnificent range of like. It enthralls if one goes into the depths of folk heritage. Diversity in religious faith, cultures, languages and living characteristics tell of a comprehensible consistency in ethical and social thoughts and makes an interesting reading as one evaluates folktales and folklores critically at various levels. Unity with lucidity despite apparently inherent inconsistencies reveals unique features of the synthesis trussing Indians in one indissoluble whole.

“Ethereal, godly, demoniac, truthful, valorous and virtuous forces interact and cause wonderful incidents and characters in tales of lore. Birds, animals, nymphs, ghosts and divine forces land up on earth, fight for supremacy, intermingle and construct suspense, terror, thrill and excitement and ultimately, convey that truth vanquishes demoniac spirits, visible or invisible. Folk literature is neither history nor a figment of mind's eye. It exists between truth and fantasy, and gives essence of life and living. In this perspective, one can view history, myths, legends and contemporary life that eagerly speak of folk literature and lyrics, and identify existence. One must accept that myths and legends, many a time in the past, refused simple elucidation and so, a man begins connecting life to myths and legends, invents fresh little tales relating to men, supermen and ghosts including animals and birds.

“Therefore, it is a sacred duty to protect this heritage. One should not forget that at forlorn moments of life, a man even in a crowd, goes back to past to seek solace, and consequently, this past needs safeguards. The posterity in weak moments looks back to times of yore. A hard truth it remains. It struggles in the present to gather what was left and consolidates what it achieved today, and looks ahead so that it turns back to see what was left behind, for it needs inspiration from the long past.”

There are twenty-six tales varying in length from 4 to 14 pages. The titles are as follow:

Theory story starts thus: “This Cosmos, the earth and vegetation, and nature in various hues and shapes, and the rivers, mountains and human beings, the created beings and the gods and goddesses from an integral part of lives of the people of Himachal. Thoughts of people living habits, rituals and customs interweave interesting and educative tales that have roots in legends and myths.”

The writer speaks outside the tale many a time. Each little pocket of influence had in its possession folktales and lore, fables, parables and songs with little variations when compared to little states of the neighboring areas. The saga of stories originated and well cultivated in the vast region of cold mountains, Himalayas have a distinctive flavor of their own.

In the tale Guardians of Evil Times on the subject of Yugadharmas, here is a paragraph intended to be an appetizer.

“With a rare radiance, the young man said, “O rich woman, I am Kaliyuga. I am the regulator of the age. A man in this age must face punishment if he speaks the truth. Lie is the dharma of the age.”

“He laughed and then said, “You are a big fool. You spoke the truth and lost your son. Again, you proved wrong. O old woman, now listen. Carry the dead body to the king and tell that the rich friend of your late husband had taken a loan of rupees four lacs. When you say so, your son will get up and that shrewd friend of your husband will give the requested amount to you, More so, the act would prove him wrong in the court.”

Folktales have a purpose of giving a surprise. They make people solve mysterious and problems for themselves individually or collectively. There are some tales which are fancy tales or fairy tales which do not have either a head or a tail.

At the beginning of the tale A Puzzling Question, the author has this to say

“Grandmas quite often tell an old tale to the little children when they create noise in the house. It still fascinates and enthralls. As a grandma begins telling the tale, children sit quietly and inquisitively, and listen to the tale with eyes wide open. In truth, susceptible and innocent children enjoy exchange of lively and educative battle of wits that took place among a Brahmin, a barber and a king. A noble king gave shelter to the above persons, for they obeyed and served the king well. They continued to perform the duties as the king assigned. The barber used to get up early in the morning and did th job of haircut whenever required.”

The time gap between the coming up of two tale and the listener / reader of the present day is overwhelming. Mysteries baffled the people of forgotten times may not disturb the contemporary mindset.

Possibly the best of the tales in the volume A Charismatic Water-Nymph which is begun by author thus:


When one reads or listens to certain oft-repeated folktales one observes that the tales often speak of the kings and queens, of birds and animals and after a sequence of many twists and turns, the tales convey a great message to humanity. The messages speak of love, warmth, humanism and unity, and always deride evil and the evil doers. The present tale is widely enjoyed in northwestern part of the hill state.”

Another distinctive tale is The Power of Karma. This is the conclusion of the story;

“ Oh man, karma is superior and not the writ of destiny. You should remember that with the strength of karma, one could even change the writings of providence. Karma walks in a strange way one should know.” King Vikrama told, stood up, accepted the greetings and then, returned to the palace.

Some of the tales like An Opium Eater are funny but they are plausible and credible under amazing circumstances.

It is difficult to find ways to eliminate lapses in copy editing and easily correctible mistakes in spelling or punctuation but our kind readers can take even more serious things with a grain of salt.