My introduction to the writings of Samarpan, a distinguished and learned monk of Ramkrishna Mission occurred through his treatises --- Tiya: A Parrot’s journey home, Param, Junglezen Sheru and Carving a sky: A perspective on Life. They all belong to the genre of spirituality. They are  fables like Panchatantra etc written in a language that can be appreciated by uninitiated also .Though these books belong to the realm of spirituality, none of them mentioned religion or Hinduism as such. 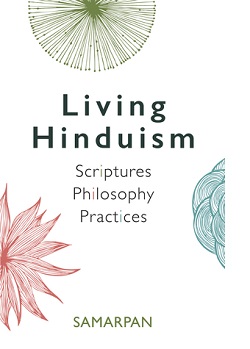 In this context, his latest presentation “Living Hinduism - Scriptures,Philosophy, Practice” is different. It appears that the publication of this erudite text has been triggered by the prevailing societal confusion and turbulence in the country. Religion, specifically Hindu religion is being exploited to gain political mileage by various political formations. Distorted perception of Hinduism is being projected, and it is a fact that perception matters in religion as in other things. Hindutva, is one of the popular, though perverted perceptions of this great religion. Recent rise of popular Hinduism seems to concentrate on trivial issues like food, dress, behaviour, etc and devoid of the great spiritual content of Hinduism.  Impressionable minds fail to breach the frivolous to reach the fundamentals. If this is terrifying to the weak, it is laughable to the indifferent.

Most Hindus associate their religion with gods, goddesses, rituals, temples and charlatans. Cows and castes are supposed to be integral to the consciousness of a Hindu.The  book attempts to impress that none of these has any importance in Hinduism.  These are social dimensions of Hindu society and integral to popular Hinduism only. The book does not look into them. it views only the religious aspect of Hinduism.
Religion is characterised by the struggle to attain universal existence. It is a journey from personalised existence, limited by time and space, to impersonal existence that goes beyond these perimeters.This observation is best elucidated when read in combination with the author's earlier texts such as Carving a sky and Junglezen Sheru.  Struggle to attain universal existence is inspired by the aspiration for carving a larger space. (Carving a sky), but it cannot be accomplished without uncovering and discovering one’s core strength. (Junglezen Sheru)
The book is divided into four parts: the first one gives a brief outline of Hinduism. The second part gives an overview of its scriptures, the third one discusses the philosophies and the last section looks at the future Hinduism.  It is amazing that the author has been able to present such a complex and confused concept as Hinduism in a very easily comprehensible way in the space of just 224 pages.

Excerpts from the book

A typical Hindu goes through or rather drifts through life in the shadow of its innumerable Gods & Goddesses and the plethora of matching rituals, traditions and customs. He follows the way of life followed by his elders in the pursuit of his individual goals and the aspirations inculcated by the modern life.

The most common, hence crude , understanding about religion is that there is some God, sitting high up in the clouds, who controls things from there for us. When we pray to him, he, like a benevolent robot or a loving grandpa, sets wheels moving in our  favour, which we call a miracle, and if we do not get a favourable response, we are free to curse him and his insensibility. He favours the  devoted, and hurts the bad. So if one offers something to him, the gears of his favour are  greased. Religion runs at much deeper levels.

Being an inclusive religion, it is difficult to define Hinduism, the way Islam or Christianity can be. However, a Hindu is expected to have these core convictions.

1* Acceptance of the spiritual truths as preached in the Vedas, and elaborated in any of the sacred books of the Hindus.

2* The belief in the transmigratory nature of the individual soul till it attains mukti. This the state of freedom from every bond of duality like birth and death, good or bad.

3* Acceptance of different paths of religions as ways to perfection.


Religion, particularly Hinduism, is not a product of thought process to serve as crutches to lean upon during bad times. Religion is a living experience that makes one perceive the  intrinsic nature of the world, beyond its empirical value.

Hinduism preaches the way to live a meaningful life in this world, and also reveals the way to get out of it. Every religion does it, but Hinduism specializes in preaching both the paths--- life in the world(including heaven), and the way to get out of it. In fact Hinduism is the only religion that preaches acquisition of wealth and enjoying pleasures as valid goals of life, as long as one does not make moral transgression.

Hinduism believes that not everyone is at the same stage of evolution, and hence people would require different paths to progress, so paths leading to spiritual freedom is accepted to be unlimited, and hence, it accepts every religion that helps one grow in knowledge and strength, leading to emotional and spiritual freedo, to be true. This acceptance is not lie tolerating a neighbour or accepting his presence, but is more like socialising freely with him and picking up his good qualities.

This basic nature of Hinduism to accept all, makes Hinduism an inclusive religion. In comparison to this every other religion is exclusive, which at times makes them intolerant towards others. Only Hindu Dharma accepts all past and future religions as a valid path to the divine. And also treats each of them as its own.

The teachings of any religion consist of four faces: philosophy, mythologies, rituals and ethics. Philosophy acts as the guiding light of spirituality., mythologies act as an aid in understanding these philosophies, Rituals are the concretised philosophy that one has to practise for one’s spiritual upliftment. And ethics is about how one must conduct oneself in the world.

A religion is practised in one of the three formats - rituals, recitals, and realisation. Hinduism is strictly a religion of realisation that must be attained here and now It is a different matter that non spiritual masters of Hinduism make it appear like a religion of rituals and recitals to their followers, even though there is no set of practice that can define Hinduism.

Dharma, the way, in Hinduism is strictly based on what the elders of the society followed, They usually follow one of the many smritis (codes of conduct). When a great person of a particular locality changes his way of life from the existing norm, people who follow him would change their practices too.

There can never be a single unified code in Hindu religion. Hence the idea of unity in diversity has been the core of Indian religion, philosophy and the way of life.

Hinduism does not claim to have any exclusive rights over the spiritual truths; it preaches, and it believes that a person can reach the spiritual goal through any path. This also makes it accept every faith with respect.

Rituals are the crystallised philosophy of any system, religious or social. It is through rituals, ceremonies, anniversaries and festivals that an individual remains tied with one’s society. It is through these that a student feels close to one’s institution, and a military person identifies with the regiment and the country. Take away ritual from a person’s life, and they would feel shut out, who may also become wayward.

Sin, as a theological principle does not play any role in Hinduism. The general term for it is adharma. To indulge in which implies transgression of certain code of conduct. Since these codes are not permanent in nature,  transgressions can never be against God.. as the term is generally understood. Sin is more like a mistake that can be corrected through penance and right action.