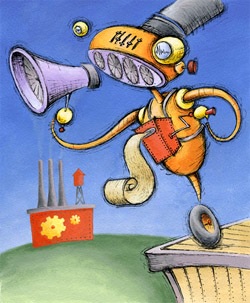 Effective oratory has always held man in thrall since the dawn of civilization. In third century B.C. the Athenian orator and statesman Demosthenes with his stirring speeches organized a unified resistance to Philip - II of Macedonia.

Who can forget these lines immortalized by Shakespeare? "Friends, Romans and Countrymen, lend me your ears....." Anthony, in one of the most compelling orations in the history of human kind, unmasked the traitors who had murdered Caesar and galvanized the Romans into action.

Modern times too have seen great orators. Swami Vivekananda's address to the Parliament of Religions won the hearts of millions across the world. When he started his speech with the endearing words, "Brothers and sisters of America," the entire audience got up to give him a standing ovation.

Hitler and Gandhi have been very powerful speakers. However, there were some major differences. Hitler united an entire nation fuelling sentiments of Nazi pride, supremacy, xenophobia and unabashed jingoism. Gandhi too brought people together, but his call was based on truth and non-violence. Hitler relied on propaganda, Gandhi on communication, based on peace, truth and trust. That is the reason Hitler's triumph was short-lived while Gandhi's is eternal.

"I have a dream that my four little children will one day live in a nation where they will not be judged by the color of their skin but by the content of their character. I have a dream today....." These potent words of Martin Luther King Jr. mesmerized an entire race and gave a sense of pride and unity to the black community of North America.

Thus we see how important effective public speaking is. It can win hearts, minds and souls. It can inspire commitment, courage and conviction. It can start battles and stop wars.

Public speaking is both a science and an art. The content of your speech is the science part. Your style, presentation, voice modulation and how you manage to mesmerize the audience is the art aspect.

A speech should ideally be like a traditional story - it should have a well-defined beginning, a middle and an end. The beginning of your speech has to have a hook capturing the attention of the audience. To do that you can start with a quotation, a joke, an incident or anything riveting, to put forth an idea or a premise.

The middle should carry this idea further with cogent arguments. It should advance the premise and prepare the audience for the conclusion. The end should have a finality about it. It shouldn't leave the audience confused as to what exactly you have been trying to say. The conclusion should be one that will remain with the audience for a long time. Here too you can use a quotation, a line of poetry etc, but make sure it has relevance. Don't use a quotation for the sake of using it.

Don't distort facts or exaggerate issues simply to create an impact. The audience will see through your charade and you will end up losing both face and faith. Like the Mahatma, try to reach out to your audience with words.

Try your best to inject humor in your speech. It is a great way of ensuring the attention of the audience and also putting your point across. This will also convince your audience that you are confident about your abilities. A tense, nervous speaker turns the audience off.

The vocabulary should be simple and effective. Remember it is far easier to use difficult words than to write or speak in an simple, unpretentious manner. Hence if you want to write effectively improve your vocabulary. You can do that by reading books on a wide variety of subjects. There are also several books which are available that can help you improve your word power. These books help you enhance your vocabulary by explaining about word origins, roots, stories behind words etc.

Besides, make your dictionary and thesaurus your trusted friends. Dip into them, whenever you come across a new word. Believe me you will soon start enjoying this hunt for words and meanings.

Now coming back to your speech don’t use words which are too bombastic. For instance in a recent article published in Readers Digest several examples were given to illustrate how foolish bombastic words can sound. For instance : Can you guess what this means – ‘Emanating from a culinary vessel into a site of pyrogenic activity’. It simply is a round about way of saying - Out of the frying pan and into the fire.

Secondly never try to cram your speech. The tendency for most participants in a debate or elocution competition is to just mug up each and every word and then go and vomit everything out. And God forbid if they forget a phrase or even a word then everything goes blank. I have myself faced this situation a couple of times so I know how embarrassing it can be.

Write your speech in your own words. Even if you take the help of your teachers or parents make sure the final speech is in a language you are comfortable with. This way you won’t have to grope for words.

If you want to be a good debater you have to have a good vocabulary, you should be widely read and you should have confidence in yourself. But most important you should enjoy going on the dais and speaking. When you go on the dais and look at the large crowd what is the feeling you have? Do you feel a strange kind of power, a hold on the listeners? Do you feel thrilled that for the next five minutes you have a captive audience that is waiting, willing and wanting to listen to you? If your answer is yes than debating is certainly your cup of tea.

If you have decided to take debating seriously keep the following pointers in mind while giving your speech:

Move your eyes across the length and breadth of the hall. Many times it happens that the speakers avoid looking at the audience and instead look at the fan, outside the window, at the floor and practically every where else except where they should actually be looking. The audience feels alienated and switches off.

Most speakers feel nervous especially during the beginning of the speech – they sense the all too familiar butterflies doing a tango in their stomachs. There is a solution for that. When you feel nervous search for a friendly face in the crowd and fixing your eyes on him or her start your speech. Then quickly look for a few more friendly faces across the audience and let your eyes address them. You are sure to get some positive response from them such as a friendly nod or a smile which will ease your nervousness. Once your butterflies have flown away let your gaze sweep across the audience and get ready to sweep them off their feet with your oratorical brilliance!!

The delivery of the speech is as important if not more than the content. Make sure you modulate your voice properly. Many of speakers tend to speak in staccato sentences or drone away monotonously. Then they are others who raise their voices. Clearly they believe in the dictum that if you can’t beat ‘em shout (at) ‘em!

Learning the right way to modulate your voice needs a lot of practice. Deliver your speech in front of your parents, teachers and friends and ask for their feedback. Practice speaking in front of a mirror. Tape your speech and listen to it. All these will help you iron out the wrinkles in your modulation.

Accent is another area where many debaters flounder. Speak in your natural accent. Even if it doesn’t sound like queen’s English doesn’t matter. You can always strive for improvement. But never put on an accent. It sounds terribly artificial and distracts the audience from your speech.

Make sure your posture is also your natural one. The audience will see through an artificial stance sooner or later.

Remember, the audience is your customer and you the product. It is going to view you as a complete package. Every aspect of your speech, your style, your personality and your attitude is going to make an impact. So don’t discard any aspect thinking it is trivial. One never knows that facet itself may prove vital.

I would like to emphasize one point. If you want to excel in public speaking you should be prepared to work with a lot of patience and focus. Demosthenes used to lisp. To improve his speech he would put pebbles in his mouth and walking along the beach practice his speech during the night for hours on end. The roar of the waves, the pebbles in his mouth and an indomitable will to win, made him one of the greatest orators of all ages.

In Children’s World the Editor Ms. Navin Menon, cites the case of Nani Palkhivala, the eminent lawyer and champion of Human Rights as an example of what extreme resolve can achieve. As a child young Palkhivala stammered very badly. One day when he was eleven he was so frustrated that he went and gave his name for an extempore elocution competition. His determination not only earned him a standing ovation but he grew up to become an outstanding orator.

Dale Carnegie, the hugely successful motivational writer says, “The ability to conquer nervousness and speak with self confidence is not a gift bestowed by providence on only a few rarely endowed individuals. Every one can develop his own latent capacity if he has sufficient desire to do do.”

So friends, you have it in you to sizzle on the debating circuit. To help you do that I present before you a recipe for effective public speaking:

Take a speech with an impressive content, mix it with a good vocabulary, add a sprinkle of humor, stir it in your own words, add it to your memory, warm it on the hot plate of commitment and serve it with the correct amount of confidence, modulation, accent and yes Attitude. And then wait for the applause to follow.......