A Sikh Yearning to Visit 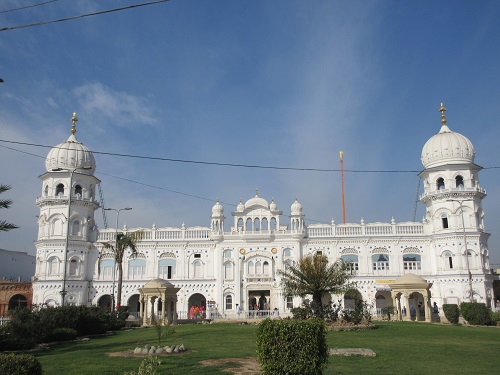 This year the 550th Parkash Purab of Guru Nanak Dev Ji is being celebrated by all the Sikhs worldwide with great enthusiasm and reverence. As homage to Guru Ji blessed birth place, we decided to visit the Gurudwara Janam Asthan in Nankana Sahib, now in Pakistan. The shrine is built on the spot where Guru Nanak Dev Ji was born in 1469. 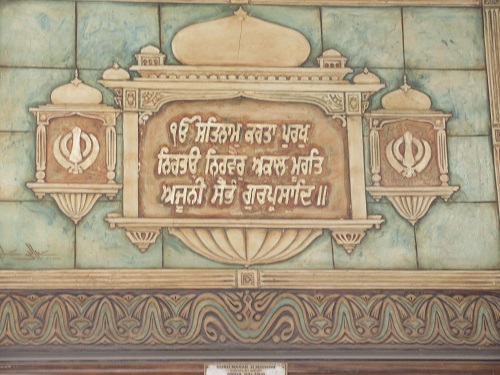 We picked the month of March for the journey, as it is the spring time with pleasant temperatures and bloom everywhere, after the cold winter and before the onset of hot summer. We had decided to cross the Attari-Wagah border on 14th of the month. We got up at 2:45 AM and went for darshan of Darbar Sahib, in Amritsar. The place was really crowded compared to other days, and when the following shabad was sung by the Ragis: 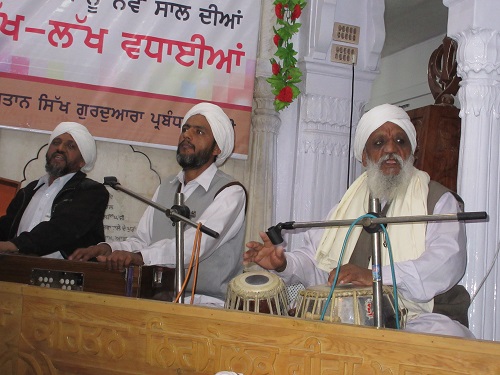 “Chet govindh araadheeaai hovai anandh ghanaa.” — (SGGS, Pg. No. 133)
Translation: In the month of Chet, by meditating on the Lord of the Universe, a deep and profound joy arises.

We realized that how blessed we were, as it the first day of year as per Nanakshahi calendar, and we were in the holiest Sikh shrine. By 11:30 AM we were in a taxi to go to the border. We went through the formalities and crossed over the zero line into Pakistan side of the border. Our host had arranged cars and after their welcoming we drove to the hotel. We arrived at the hotel at 3:30 PM and checked in. After checking in, we decided that today being a very special New Year day, we should attend the special program at the birthplace of Guru Nanak Dev Ji, in whose honor the Nanakshahi calendar is named. So, we quickly freshened up reassembled, packed ourselves in the cars and we were on the road to Nankana Sahib. The metaled motorway was very impressive and the cars were zipping at the speed of 120 KM/hour. In fact, we felt that motorway better than what we have encountered in the most advanced countries. At 7:00 PM we arrived inside the Gurudwara Janam Asthan in Nankana Sahib. The first sight of the facilities and buildings there take you in a state of awe and we were still trying to soak in the spectacle, beauty and grandeur. But as the special program had already started, we went straight to the diwan hall.

We attended the program and heard Keertan from the jatha of Bhai Lal Ji, the eighth generation descendants of Bhai Mardana, the companion of Guru Ji. We again the heard the shabad quoted above from the Bhai Sahib of the Gurudwara. The special program ended at 9:00 PM, then we had darshan of Sukhasan place (Guru Granth Sahib’s retiring room for the night) and langar (dinner) in the langar hall. The food tasted very delicious and eating the food there felt like a blessing, as it the place of Guru Ji’s birth. The tears of thankfulness were rolling down the cheek in a stream. We were counting our blessings of being there at such an auspicious place that day: 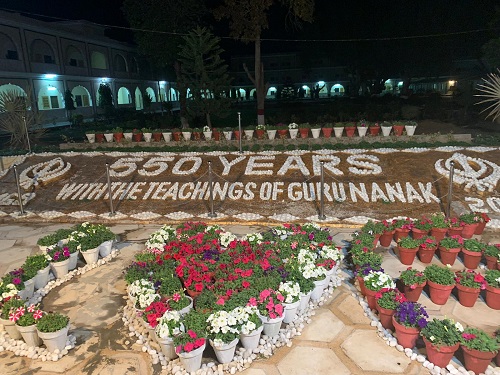 Translation: Sri Nankana Sahib and other Gurdwaras and shrines of the Guru, from which the Khalsa has been deprived, kindly bless the Khalsa with the boon of open visitation, worship and management of these holy shrines.

The above line has become part of collective prayer (Ardas) for last 72 years which is a constant reminder of the cherished desire of the Sikhs. The physical reality of this most auspicious shrine remains where it is, and the only way we can have unobstructed visits is when we make an effort on our part to go there. That effort will be for us to make travel plans and visit these shrines. Let us go there and seek our blessings from the soil of Guru Nanak Dev Ji’s birth place. If Daultan Dai, mid-wife giving birth to Guru Ji felt rewarded, and refused the award for her services, we will also be rewarded when we touch our forehead to this soil. The Gurudwara is the school to imbibe “Jeewan Jach” (=life style) on how to become “Jeewan Mukat” (=liberated while alive) in this life, then a visit for a Sikh to this shrine will truly be inspirational. After all, the founder of the Sikh faith spent his childhood and youth here, basically the formative years of his life. There is no better place for us to start in building up our faith, then where the Preceptor started his human life journey.

The township of Nankana was rechristened by its ruler Rai Bular, from Rai-Bhoi-di-Talwandi in honor of Guru Nanak Dev Ji. The word Nankana is shortened version of the name Nanak-da-Aanaa which means the house of Nanak. Now, there is a lot of new construction activity taking place on in this sprawling facility to spruce it up and get it ready for the big celebration in coming November. The sarover (pool) was under renovations. The new room to store shoes of devotees is also under construction, besides additional housing accommodation is being constructed. All this construction efforts is to ready the facility, before the actual big celebrations in November. Let us visit this shrine and give a fillip to it; this will be truly be translating the words of our collective prayer into reality. With concerted efforts from all the Sikhs around the world, we can all help in bringing a connection to this Guru Ji’s birth place and give it the reality cherished in our prayers. Later on after the visit, when we hear those words of prayer with Nankana Sahib, we will be thanking Guru Ji for blessing us the opportunity of visit. It will become our lifelong thankfulness when those words ring our ears. After all, the thought and initiative to visit germinated, with Guru Ji’s blessings alone. In a way Guru Ji prompted us to plan and come there.

On the right hand side of the main building known as Chaukhandi Gurudwara Janam Asthan stands a tree, as a lone witness to the inhuman historical atrocities perpetuated by Mahant Narain Das who managed the shrine and his accomplices. When the 200 peaceful Sikhs campaigning for liberation of shrine from the abuse by Mahant arrived within the complex, they were greeted with the rain of bullets. Then Bhai Lachman Singh, who was already injured by the bullets, was dragged to this Jand tree hung upside down with a rope, and burnt alive. We were told that this Jand tree dried for a while after the tragic event, but it was revived by prayers and it is green and alive still. We were very touched to hear from Bhai Daya Singh a priest there, that on the morning of the day of attack on the Darbar Sahib in Amritsar in 1984, blood coming out of this tree. That spectacle was eye-witnessed by his now diseased father Bhai Ishar Singh, who was earlier employed as the priest there. There is also a well within the complex known as Bebe Nanaki’s well which is dry now and it is being revived.