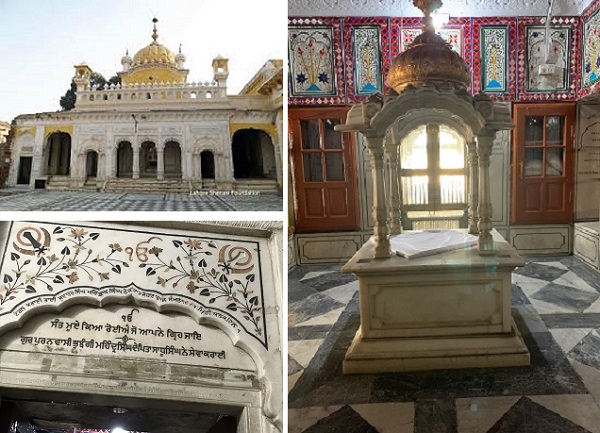 Strange is the connection of the city of Lahore, to martyrdom of Guru Arjan Dev Ji, as it also happens to birth place of his biological father, and predecessor Guru Ram Das. It can be said that Guru Arjan Dev Ji provided a live demonstration to the words of Guru Ram Das Ji:

Translation: If You will bless me with happiness, then I will worship and adore You. Even in pain, I will meditate on You. 2. Even if You give me hunger, I will still feel satisfied; I am joyful, even in the midst of sorrow.3. I would cut my mind and body apart into pieces, and offer them all to You; I would burn myself in fire. 4.

It is here Guru Arjan Dev Ji suffered deprivation of food; was subjected to extreme torture by being boiled in water like potatoes and made to sit on red hot pan with fire underneath and red hot sand put over his head. The intriguing aspect of this painful history is that it was perpetuated by Chandu and Guru Arjan Dev Ji gave a live demonstration of acceptance of Divine will. The memorial was erected by Maharaja Ranjit Singh in memory of supreme sacrifice and it is called Dera Sahib. To the inquiry about the reason as to why this memorial is named Dera, the answer provided was that Guru Ji’s body never left this place, so it is its abode. After the tortures of five days Guru Arjan Dev Ji had gone into the river Ravi for a dip and he never came back, as the body was never recovered. Before looking at the brief history let us first see what Guru Arjan Dev Ji himself says about “Dera”:

Translation: (Letter) DADDA: This is not your true place; you must know where that place really is.

Guru Ji has clearly told us that the body is only alive because of soul, and true place of soul is not in this world. So, during the period he was tortured he had connected his soul to Lord, which in his words is the permanent abode:

Translation: Nanak builds his house upon that site where there is no death, no birth, and no old age.

Now, let us briefly look at the events associated with martyrdom. Its instigation to Chandu was from Meherban, son of Prithi Chand, the older brother of Guru Ji. Chandu, who was the finance minister of Punjab, used that as an excuse to inform Jahangir that his son Khurso, who had rebelled against him, was being given shelter and blessings by the Guru Ji. According to Jahangir’s autobiography titled Tuzak-e-Jahangir he records; “Many times it occurred to me to put a stop to this vain affair or to bring him into the assembly of the people of Islam." So, on May 20, 1606 he passed an order to Murtaza Khan in Lahore that property of Guru Ji be confiscated and he should be killed in keeping with Islamic law of Yasa. After passing the orders he left for Kashmir.

Guru Arjan Dev Ji became aware of shenanigans and made plans to face the situation. He entrusted the leadership of the Sikhs to his son Hargobind Ji on May 15, 1606. He asked all his family members to move to village Dalla, but he himself opted to stay back in Amritsar. Guru Ji was arrested on May 22, 1606 in Amritsar and brought to Lahore by Murtaza Khan. Chandu got custody of Guru Ji from Murtaza Khan, and re-proposed that Guru Ji to accept matrimonial alliance of his daughter to Guru Ji’s son Guru Hargobind Ji. When Guru Ji refused Chandu’s offer, he threatened to torture, yet Guru Ji remained unmoved. When Chandu failed in his objective, he ordered Guru Ji to be tortured as per diktat of Emperor Jahangir. The regimen of torture was unleashed in his own house; Lal Haveli:

Day 1 — Deprived of food and water, made to sit out on hot summer sand in the month of May.

Day 2 — Made to sit in large copper cauldron full of boiling water with fire under it. Guru Ji accepted the situation as divine will, with no trace of anger or animosity against Chandu.

Day 3 — Now Chandu ordered his orderlies to make red hot sand on fire heated pans poured on Guru Ji’s head with large ladles while seating him in the cauldron of boiling water.

Day 4 — Guru Ji was made to sit on red hot iron plate with red hot sand on fire heated pans and poured on Guru Ji’s head with large ladles. On that day Hazrat Mian Mir came to visit Guru Ji and saw ghastly scene with his own eyes. His shock knew no bounds and he offered to daze the town down brick by brick, where such atrocities are perpetuated. Guru Ji was at peace, composed and did not express any words of sorrow or grief. Guru Ji’s sang in melodious voice:

Translation:Your actions seem so sweet to me. Nanak begs for the treasure of the Naam, the Name of the Lord.

Day 5 — Chandu wanted Guru Ji to be sewn in cowhide skin to prevent any blood from dropping from the blistered body as per “Yasa” stipulations and then be thrown in the river Ravi. But Guru Ji expressed a desire to bathe in river Ravi before the orders were to be executed, which Chandu acceded. Then Guru Ji entered the snow fed cool and soothing waters of river Ravi on the evening of May 30, 1606, and never came back. As the body was not recovered the memorial drives its name as the abode of the body.

The sacrifice of Guru Arjan Dev Ji is unparalleled affirmation of firm faith and acceptance of torture as Divine will. The threats, coercion and torture failed to achieve their objective; instead the martyrdom ignited a new life, determination and vigor in the Sikhs. Even today, it continues to inspire succeeding generation to willing sacrifice self for a higher cause.

Today, the memorial building is undergoing renovations. The parkash of Guru Granth Sahib is being done at a temporary location, while construction is taking place. We had langar in the langar hall. The staff was very cordial and welcoming and even had Muslim and Christian members taking care of the memorial. What struck chord with me was that the sweeping of the floors, upkeep of the memorial of the Sikh Guru; is in the hands of non-Sikhs. Their devotion, dedication is legendary. I wish and pray if we could learn these traits from them. 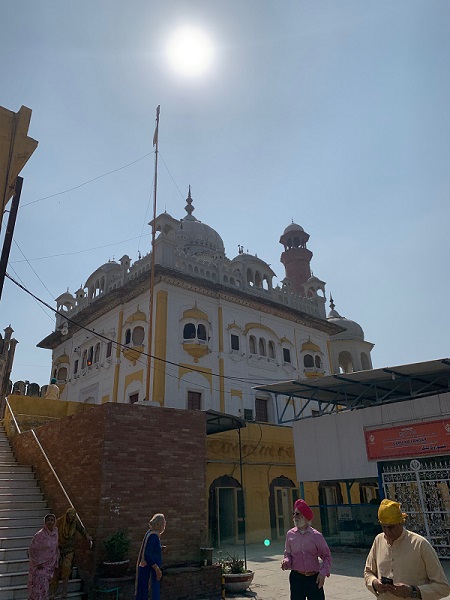