Poison in Water: Population in Peril

by Dr. A. Harindranath 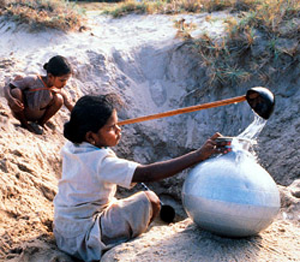 Since times immemorial, the villains in the society, world over, have used arsenic as a slow poison. Arsenic poisoning is in vogue again; however, the villain is no one but the Mother Nature. Yes, arsenic has surreptitiously found its way into the reservoirs of ground water.

The arsenic pollution in groundwater is now a global phenomenon. India, Bangladesh, Nepal, Pakistan, Vietnam , China, Argentina, Chile, Hungary and Mexico are the worst affected. In India, adjacent to Bangladesh, west Bengal is badly affected by the arsenic contaminated ground water. In west Bengal incidence of contamination of water with arsenic were reported as early as 1983. The health officials identified 63 persons suffering from arsenic toxicity. The scientists from the Geological Survey of India and School of Environmental studies by the end of 2001 had identified that out of a total population of approximately 42 million in 2700 affected villages falling in 18 districts, nine million people were suffering from arsenic toxicity.

In India yet another area affected with serious arsenic poisoning is in Chattisgarh State. The worst affected villages; Kaurikasa, Dewarsur, Mulhetitola and Meregaon fall in Rajnandgaon district of Chattisgarh. Here the arsenic content in groundwater is reported to be between 0.05mg to 0.1mg/litre.

Lancet says that millions are affected in Bangladesh. In Bangladesh, arsenic content in water from tube wells and dug wells of 50 districts out of 64 is much more than the safe limits. More than 2000 villages in Bangladesh have been identified where the population is drinking the poison everyday. Similarly, the information pouring in from the neighboring Nepal is equally alarming. There, four percent of the 17066 tube-wells tested in the Terai region have shown arsenic content more than the safe limits. It is a matter of great concern.

Arsenic is a highly poisonous, amphoteric element. That is, it can react both with acid and base with equal ease. It is used as an insecticide, as rat poison, as a solid state doping agent and arsine gas is used as a poison gas by the military. It is also used as a decolorizer of glass, paint-manufacture and textile printing. Arsenic is known to cause peripheral vascular disease, ischemic heart disease, cerebral infarction, skin, and bladder and lung cancer. Latest finding in China shows that arsenic can also cause diabetes mellitus.

The WHO standard of 1993 permits a maximum limit of 0.05mg/litre of arsenic in drinking water in India , Bangladesh and Nepal. Astonishingly, the data collected by various groups of scientist reveals that the arsenic content of groundwater in west Bengal and Bangladesh is much more. The scientific community including the geologists, environmental scientists, public health engineers all over the World got alarmed due to this hazard. The reasons for release of the poison in the groundwater are still being investigated.

Association of arsenic with geothermal waters is well known. It was thought that superheated water pouring out from the womb of the Earth brought arsenic along with and contaminated the sub-surface water reservoirs. Arsenic contamination is known from the inter-montane plateau and Pacific Mountain areas of the Unites States. It appears that mining, industrial wastes, herbicides and pesticides and geothermal waters contaminate waters of affected areas in the USA. To some extent it is correct, but doubts are raised about the areas where such activities are not taking place. West Bengal, Bangladesh and Nepal fall under this category. It is now established that the source of arsenic in groundwater in Bengal and Chattisgarh is natural. But this does not solve the problem. It is essential to find out the mechanism that triggers mobilization of this poisonous element into groundwater.

The urbanites are aware about contaminated, dirty drinking water. Those who can afford use electronic filters at homes or go for mineral water. The poor villagers are blissfully ignorant about all this. For them cold water drawn from the village dug-well or the tube-well is the purest and safest drinking water. They are forced to become a victim of this recently identified natural environmental hazard. The latest theory put forth by the scientists says that arsenic in natural state is released due action of certain microbes (organisms smaller than bacteria). Fortunately, these microbes are present in small pockets. Consequently, arsenic contaminated aquifers are also localized. Had it been due to a deliberate mischief by an industry, may be the culprits would have been behind the bars. Here the culprit is not even visible to the naked eye.

The problem has come to stay. Water is essential for life and providing safe drinking water is a state subject. The arsenic problem has to be tackled in a planned manner. Passing the buck on the Central Government or on the State will not serve any purpose. Corollaries can be drawn from the action taken by the neighboring country, Bangladesh or other countries with similar geological set up. The World Bank launched a project named the Bangladesh Arsenic Mitigation Water Supply Project (BAMWSP). This $44 million, four years' project launched in 1999, envisages identification of affected Wells, provision of alternative sources of arsenic-safe water and capacity building at the national and local levels. The BAMWSP also provides resource for research, awareness-raising and training. A second project of the same magnitude has been launched for awareness of masses, exposure avoidance and treatment of affected masses.

At local levels a Bangladeshi, Professor Fakhrul Islam has developed an innovative filter in which a heated mixture of crushed bricks and ferrous sulfate is used. This filter costs approximately $ 3 and can supply everyday, arsenic free, potable water for a family of four. Impressed by the efficacy of the filter, the United Nations is helping in promoting the Filter throughout Bangladesh. Similarly, in Nepal a common household filter called '3Gagri Filter' is being tried which uses cheap and local materials such as sand, wood charcoal, nails, bricks, and unglazed burnt clay pots. The trials so far reveal that the filter produces about 160-170 liters of arsenic and iron free water daily. If the readers recollect, fabrication and use of such earthenware pot filters was taught in Civics of class VIII in Indian schools. Alas, we were never serious about the subject then! Now it is history.

The existence of the hazard is well established now. It has already affected millions of people in Bengal . A massive program is required to be launched which has to find the most effective, acceptable and sustainable solutions for mitigation. Developing and popularizing simple devices like the filters being used in Bangladesh and Nepal for the village folk of the affected areas is imperative. Ours is a vast country and despite fast strides in development, rural health is in shambles. Who knows that there may be many more areas affected by the crisis? Therefore, exhaustive survey of all sources of water in the possible contamination prone areas is a must. Apart from water sampling, identification of affected population would be equally important. A program on the lines of Pulse Polio is the need of the hour to identify prone areas and educate the masses against the ill effects of arsenic.

Water is such an essentiality, that the magnitude of the problem is multi-dimensional. We are still not sure as to how much arsenic has already reached the food chain via tube-well irrigation system. The studies in Bangladesh have conclusively proved the existence of poisonous levels of arsenic in the fruits and crops. Massive efforts would be required only for identifying such affected areas and crops. In order to rope in the local population an awareness campaign is need of the hour. Proper watershed management, harnessing surface and rainwater resources are required to combat arsenic as calamity. One must understand that man-made environmental hazards can be prevented, but it is impossible to fight a natural hazard. It is quite likely that the presence of arsenic in groundwater may be nature's initial warning against many more toxins yet to come.

More by :  Dr. A. Harindranath