A Sufi, A Rishika and A Modern Master

Many years ago I purchased from a used bookseller on a city footpath a damaged copy of a book which subsequently became one of my beloved ones – as so many other books I bought from secondhand booksellers became. It was published by BBC and is essentially a collection of the so-called supernatural experiences people have had in totally unexpected moments – during a bus journey, while taking a leisurely walk on a city footpath, in the middle of a leisurely conversation, and so on. Most people consider these powerful, life-altering experiences extremely rare, but the book title suggests and the book explains they are not rare but common: The Common Experience.

In this short article I am not going to discuss any of the experiences from that book but similar experiences three great masters have had – one, a Sufi who lived eight hundred years ago in Turkey, another a Vedic rishika who lived perhaps eight thousand years ago in India, herself the daughter of a rishi and the third, a contemporary of ours who was at one time declared  by the likes of Dr Annie Besant the messiah the Jews have been waiting and the future Buddha Maitreya – a  man I had the good fortune of meeting in my younger days in Krishnamurti Gardens in Chennai. Not surprisingly, the experiences of the three are exactly the same though expressed in different languages and in metaphors that are defined by the unique culture each belonged to.

Mevlala Jalaluddin Rumi is widely considered the greatest Sufi master ever, if masters can be classified as smaller and greater. He is a master who lived some eight hundred centuries ago in Turkey who combined in him the inner light of the most profound wisdom and the power to express it in language unsurpassed.

Here is the Coleman Barks translation of part of one of his poems in which he declares his total oneness with all that is – and all that isn’t:

I am the morning mist,
and the breathing of evening.

I am wind in the top of a grove,
and surf on the cliff.

Mast, rudder, helmsman, and keel,
I am also the coral reef they founder on.

I am a tree with a trained parrot in its branches.
Silence, thought, and voice.

The musical air coming through a flute,
a spark off a stone, a flickering in metal.

Both candle and the moth crazy around it.
Rose and nightingale lost in the fragrance.

I am all orders of being, the circling galaxy,
the evolutionary intelligence, the lift and the falling away.

What is and what is not.

The rapturous Vak Sukta, also known as the Devi Sukta and the Atma Sukta could be as old as eight thousand years or more. It belongs to the Rig Veda. The sukta is the ecstasy of a rishika, the woman seer Vak Ambhrini, daughter of the rishi Ambhrina, given words that carry you into spaces beyond the known on their wings as garutman – the Vedic symbol of the enlightened mind – does. Vak Ambhrini or Vagambhrini could be the world’s oldest woman poet whose words of ecstasy following enlightened have been preserved for posterity in a poem that makes us wonder if poetry has ever soared to greater heights. Here is my translation of her poem:

I move with the Rudras and with the Vasus.
I wander with the Adityas and the Vishwadevas.
I hold aloft both Mitra and Varuna,
and also Indra and Agni and the twin Ashvins.

I uphold Soma, the exuberant.
I uphold Tvasta, Pushan, and Bhaga.
I endow with wealth he who offers oblations,
the worshipper and the pious presser of the Soma.

I am the ruling Queen, the amasser of treasures,
full of wisdom, first of those worthy of worship.
That me the Gods have installed in many places,
with many homes to enter and abide in.

It is my breath that blows as the mighty wind,
while I hold together all the worlds.
Beyond the heavens and above the earth I tower,
such am I in my might and splendour.

Vagambhrini’s song is the same as Rumi’s – sometimes even the words and images are the same if you see both poems in full, though the two are separated by more than seven thousand years. The two seers, one a woman and the other a man, belong to two very different cultures but the songs of the two are no more different than two morning birds that sing of the glory of the rising son each in its own way. 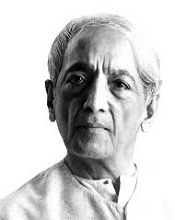 Yatra yatra mano yati, tatra tatra samadhayah – says the Indian yogic tradition: When a mind has known the truth and become still, wherever it goes it reaches samadhi. That was the case of the modern master Jiddu Krishnamurti. His Journals speak of hundreds of instances in which his mind reaches instant samadhi: Watching a green parrot with a red beak on the dry branch of a green tree, watching a rural woman walking down a village road carrying a heavy load of firewood on her head, listening to the chirping of birds, the joyous sounds of dancing trees, the soft music of ripples in water, he enters instant samadhi a dozen times a day. Here is one of his first experiences in his own words:

“There was a man mending the road; that man was myself; the pickaxe he held was myself; the very stone which he was breaking up was a part of me; the tender blade of grass was my very being, and the tree beside the man was myself. I almost could feel and think like the road mender and I could feel the wind passing through the tree, and the little ant on the blade of grass I could feel. The birds, the dust and the very noise were a part of me. Just then there was a car passing by at some distance; I was the driver, the engine, and the tires; as the car went further away from me, I was going away from myself. I was in everything, or rather everything was in me, inanimate and animate, the mountain, the worm, and all breathing things.

As we can see, the experience is common, as the book The Common Experience says. It is common in the sense that it is an experience shared by lots of people. It is not confined to masters from one or two cultures, but to all. Not confined to practitioners of just one religion, but all. Not confined to one gender, but to men and women. Not confined to one time – it has happened countless times in the past, is happening now and will happen in the future too. My parama guru, Bhagvan Shri Ramana remained in this state for six months at a time several times in his life. Shri Ramakrishna Paramahamsa remained at least twice in his life in this state for six months at a time. Swami Vivekananda had this experience at the touch of his master and it is generally understood he attained mahasamadhi in this state – on the last day of his life he meditated for three hours and all that time remained out of touch with the world as we know it, where you and I are different from each other, where everything is different from one another, where there is naanaa, not ekam.

It is also common in the sense that all who experience it experience the same. It is the common experience of all who awaken into reality from this dream we call wakefulness.

Just listen to one more such experience. Following his awakening, his self-realization, the experience of satori, another Vedic rishi cries out in ecstactic thrill in the Taittiriya Upanishad: