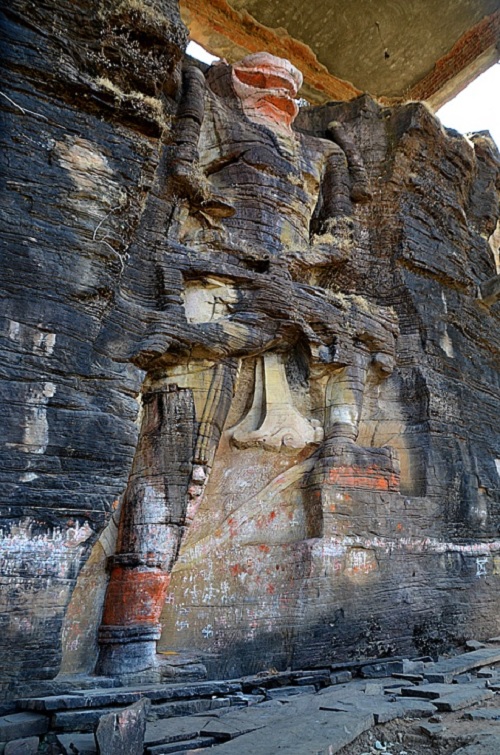 Our next destination was Dudhai, to visit the Rock-cut Narasimha and Jain relics. Google map showed a distance of 12.3 km from Nilkantheshwar Trimurti. The Rock-cut Narasimha is numbered N-UP-L224 in the ASI List of Monuments of National Importance in Lalitpur district.

I had read about this unique relief on net but did not find any research paper or article. Given that Lalitpur and surroundings are rich fields of archeological treasures bearing history of Gupta Age, and that Vishnu worship was common in the area, (as evident, for example, from the famous Dashavatara Temple, Deogarh), the dating of the Rock-cut Narasimha could well be anywhere between 4th-7th century CE.

Narasimha, the half-man half-Lion, is the fourth Avatara of Vishnu. He killed the Asura King Hiranyakashipu bypassing Hiranyakashipu’s boon immunity. Hiranyakashipu had Brahma’s boon that he could not be killed either by human or beast, neither on land nor in the air, neither inside home nor outside home, and neither in morning nor at night. So, Vishnu assumed the half-man half-beast form (neither human nor beast), emerged from the pillars of the palace (neither inside home nor outside home), at twilight (neither morning nor night), forced Hiranyakashipu on his thighs (neither on land nor in the air), and tore apart his chest and entrails. Hiranyakashipu’s son Prahlada was Vishnu’s Bhakta. Narasimha is mentioned in the Mahabharata and many Puranans. There is also Narasimha Gayatri Mantra to worship the violent aspect of Vishnu:

(“Om. Let us think well aware of Nrisimha /
the lightning-nailed /
May the Lion promote our thought and actions //

Let us meditate on
He who is known as the possessor of nails as hard as thunderbolts /
and sharp teeth /
Let us all be enthused by Lord Narasimhadeva. //

I bow down to Lord Narasimha who is ferocious and heroic like Lord Vishnu /
He is burning from every side; /
He is terrific, auspicious and/ the death of death personified.//”)

Earlier I had visited the awe-inspiring Narasimha shrine of Hampi. Narasimha, there, is enthroned. Coming to the artistic imagination of the Sculptor here in Dudhai, from what I had read on net, the Rock-cut Narasimha of Dudhai is unique because the Sculptor, choosing to remain anonymous, sculpted the relief on the face of a hill which lies camouflaged in the rocks, vegetation and trees unless one nears the relief and views from an appropriate angle. Besides, so far height is concerned, the Dudhai Narasimha, standing at a height of above 30 feet (56 feet according to some) is the largest Narasimha idol of India. So, visiting Vishnu’s fierce form had to be on our itinerary.

After a drive of about 10 km, through villages first and then along lone metal stretch with land and farmland on both sides and rare sight of human and human habitat, we reached a bifurcation guarded by an overwhelming tree. A local informed us to take one of the metal roads and cautioned that the last 1 km could be the way of no-way.

Indeed it was so. The metal road after sometime took a sharp left turn leaving us to an open sprawling space carpeting the foot and surroundings of a hill range, and extending till visibility was blurred by dusty fog. Some patches of green, like islands, cattle grazing beneath lone trees, faint trace of a village to our far right – but no human figure to guide.

While google confirmed that the Rock-cut Narasimha was waiting for us somewhere on that hill range, Bablu nodded that this being his first tour here, he had no idea where to go. Cattle were grazing but shepherds were missing. And needless to add, no sign board or direction anywhere. 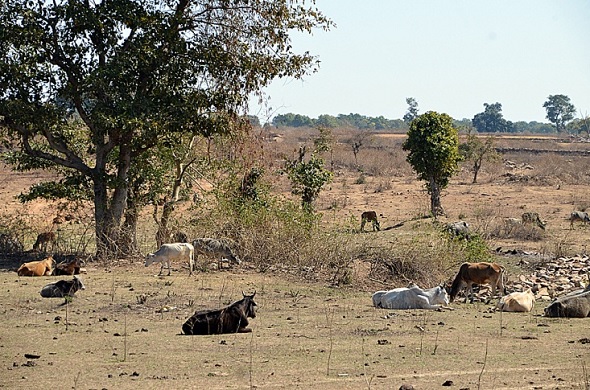 We decided to try our luck relying on google map.

Bablu drove over the undulating field raising infuriated dust on the trail, and parked below a slope on the hill that showed signs of a cattle track. Google consistently assured that our destination lay ahead of us, and the selection of this track seemed right. 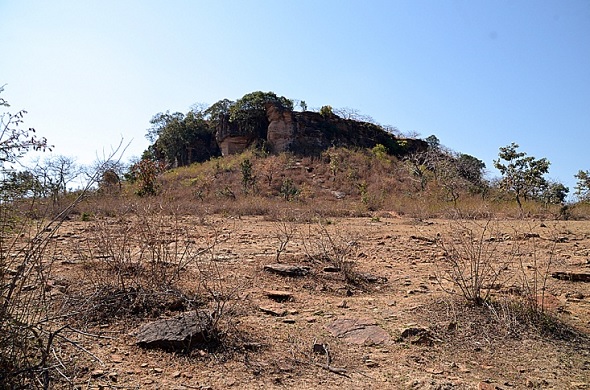 Leaving our car down, we trekked the ascent through thick bushes and reached a rocky platform. It was difficult to stand comfortably; however, the landscape around is worth a sight from that view point. The village was in view.

Bharata-India never ceases to wonder. And every tour breaks the horizon to the light of unique diversity. To think that some of my countrymen live in this landscape of wilderness! 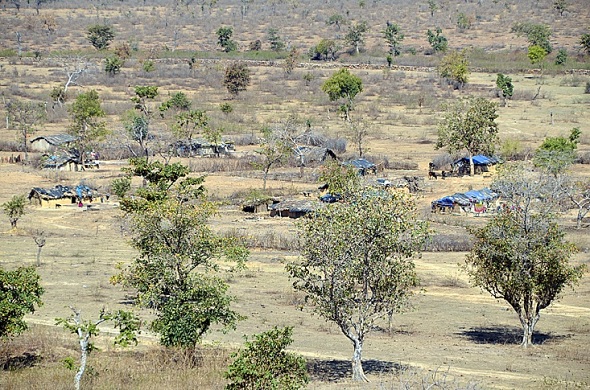 3. View of the village from the rocky platform 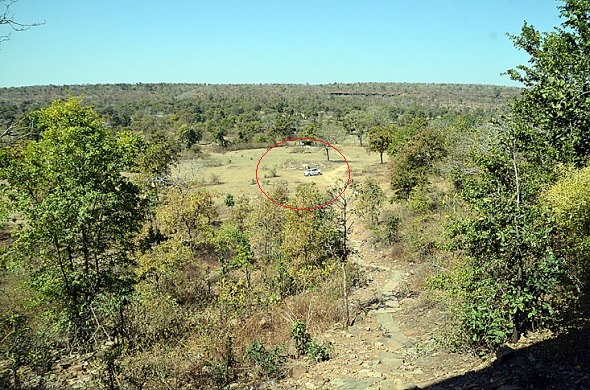 4. The landscape and our car below …

The sight around was soothing and we were refreshed by a cool breeze that could be tasted only with the privilege of this height. But the destination?

We were soon dejected that the rocky track thinned and seemed to vanish in thicker bushes and boulders round a turn of the hill, and this no more appeared to be the track we were seeking. Yet google map indicated the destination ahead of us. Initially we thought of negotiating the bushes and boulders to go to the other face of the hill, but thorn pricks and twig slashes rang the warning bell. And we would soon realize that wise we were to pay heed to the warning …

Finally we gave up hope and decided to wait for help from a chance local passerby or shepherd till we would feel the compulsion to go to the village and seek help. We started descending after spending about 45 minutes time on the top. 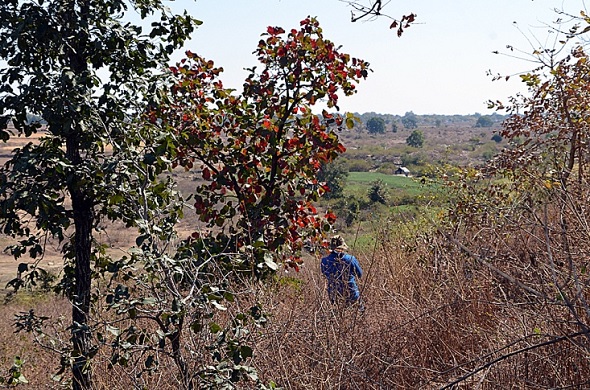 We waited near our car. This decision was right, and after about 15 minutes we noticed the faint image of a person about half kilometer away walking to the other direction towards the village.

Well, now we intercepted him, and got the desired information. He told us that we were on the wrong side of the hill, and that we should go round the hill keeping distance and keep driving till we reached a hut, from where a concrete shade would be visible on the hill. And that’s where Narasimha would be waiting for us.

The guide was perfect. We drove about 1 km going round the hill, bumping often, and reached the hut, and the concrete shade was visible on the hill. 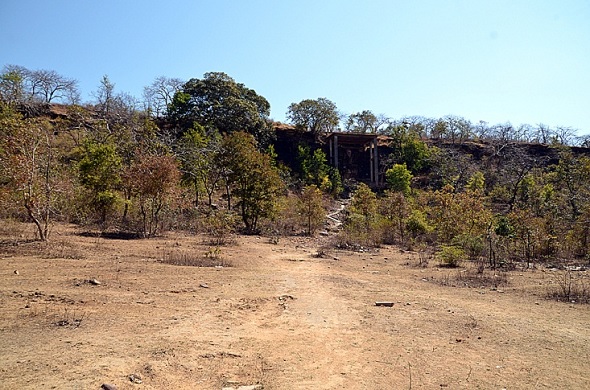 Leaving our car near the hut, we covered an open tract, and then hiked the slow ascent. Occasional green added to the charm and further energized the first sighting. 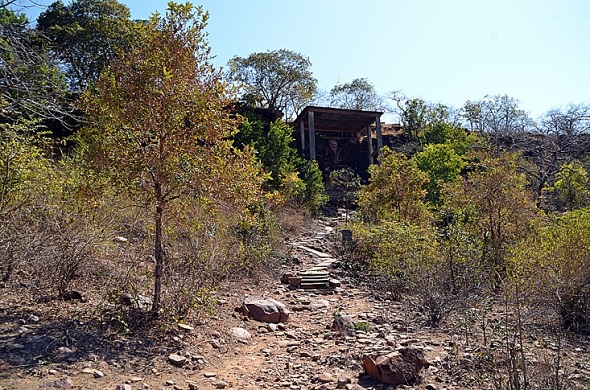 An ASI notice board declared the protected monument status, but no information on history and of course, no trace of any protector. 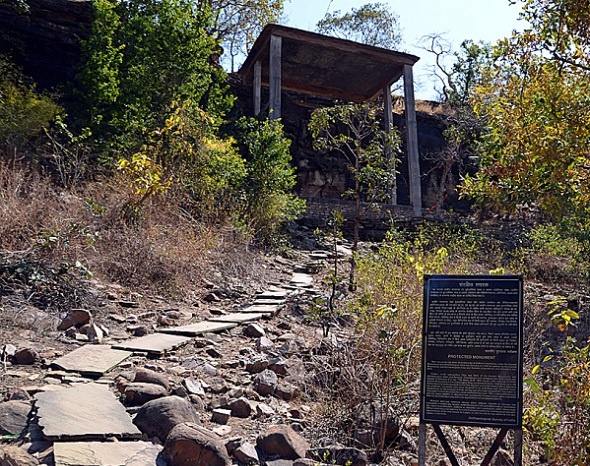 The concrete shade as usual, lacks imagination, and mars the archaic and archeological charm of the unique Narasimha relief. 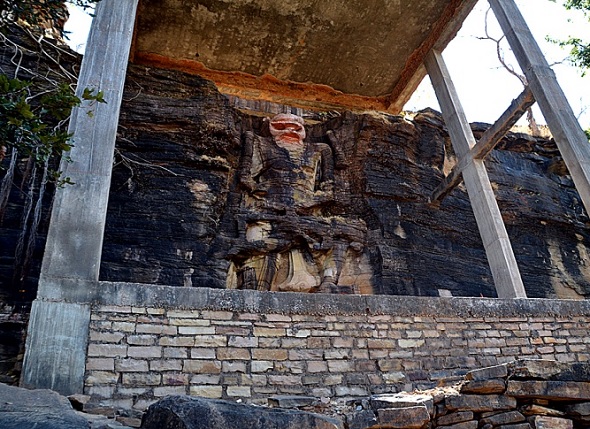 9. Narasimha beneath the shade 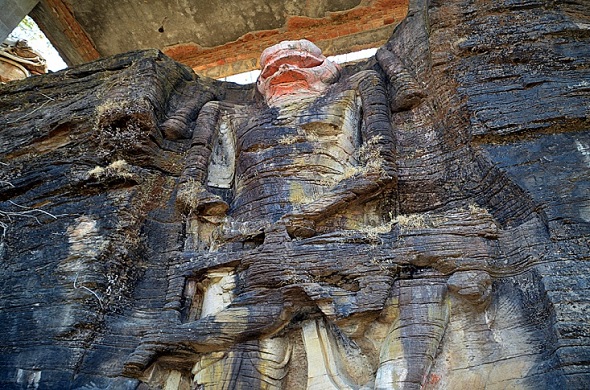 So, we reached our destination at last, and now stood before the relief, wonder-struck. The Sculptor depicted the violent face of Narasimha just at the place where the rock wears natural red colour, so that the violent snarl, exposed prominent set of teeth and licking tongue – all seem to be smeared with Hiranyakashipu’s blood. 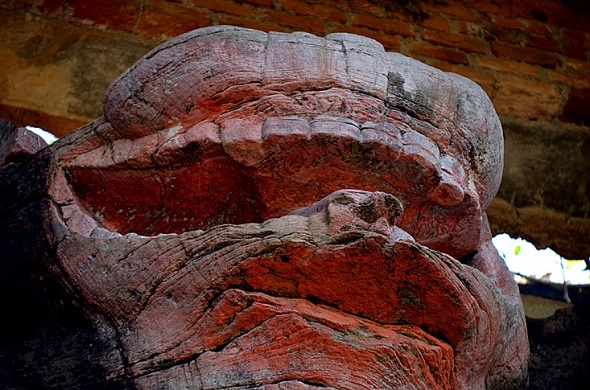 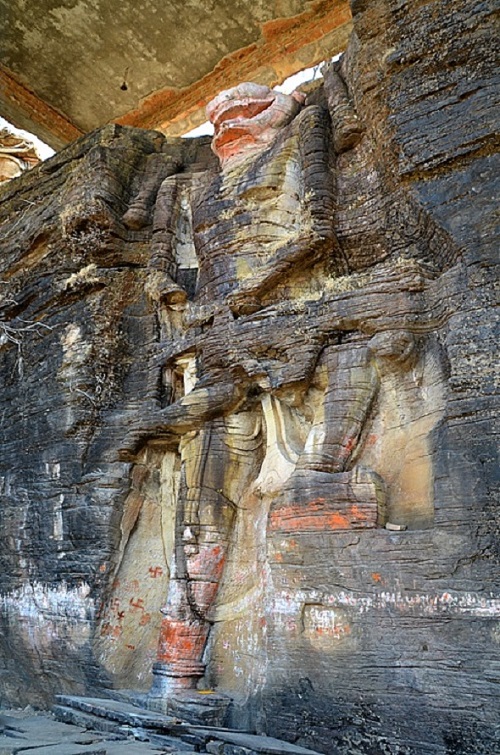 Narasimha is supposed to evoke Bhayanaka Rasa with assurance of Shanta to devotees. The unknown Sculptor infuses the relief with that role in a more significant way.

The Sculptor used the horizontal lines of stratified rock to make appearance of garment and ornaments. Even if finer details have eroded over time courtesy weather – rain, and perhaps quarrying, Art never decays because decaying Art assumes new significances. Thus the eroded concrete details of the relief have endowed the relief with universality. What is it at present is a unique blend of abstract and concrete.

Sculpted on the hill face, it is as if Narasimha is the hill or Nature personified, as if, the hill assumes the form of Narasimha, as if Nature becomes personified violence and destruction. And Hiranyakashipu symbolizes the evil, human greed, the pollutants of Nature, the destroyers of Nature and environment. Hiranyakashipu’s face cannot be recognized, as if symbolizing the faceless face of Evil or destroyer of Nature.

The Sculptor-Poet’s imagination executes an art-form in which Nature, the hill, the rock, comes alive, takes form of Lion-Man, and destroys whatever is evil and pollutant of Nature. The Hill-Narasimha provides assurance to us that Nature can take care of such pollutants of Nature; the destructive aspect of Nature has a benign dimension too.