Raj Gonds of Adilabad : A Study

This paper attempts to focus on the identity, language and culture of Raj Gonds of Adilabad district in the state of Telangana in India. Tribal communities are known as Adivasis or Moolvasis [original dwellers]. The term ‘Gond’ is derived from Telugu ‘Konda’ which refers to a hill. Tribal communities living in hills of central India are called Gonds. They may be found in Madhya Pradesh, Maharashtra, Chhattisgarh, Telangana, and Odisha. They are one of the largest tribal communities in India with a population of over three million as per 2011 census records.

Gonds may be termed as primitive tribal community. Hunting, collection of forest produce, pastoral life, agriculture, knowledge of herbal medicines among others maybe mentioned as their major concerns. Their presence is widely divided across central India. They were classified as Raj-gonds, Khatola gonds, Madia gonds, Dhurgonds, Dadve gonds, Mokasi gonds, Gaita Gonds, Koyas, etc. Raj Gonds belong to the ruling class among them. There were four major Gond kingdoms that ruled central India for four centuries. They were Garha Mandla, Deogarh, Chanda and Kherla. Chanda based kingdom spread across Adilabad district of Telangana, Chandrapur and Bhandara districts in Maharashtra state. The rulers were known to have developed systematic irrigation channels & refined revenue system.

Gonds always consider themselves as Gonds essentially, except on occasions where they function as non-tribal people. All those who speak Gondi call themselves ‘Koyator’. In all variants of Gondi language ‘Koyator’ is an equivalent term for the language. Chattisghadi is spoken in parts of Chattishghar, while those in Madhya Pradesh speak Hindi and those in Adilabad in Telangana speak Gondi influenced by Telugu language. Their expression is deeply impacted by the language of the people with who they interact regularly and live in those areas. So, one may understand that ‘Gondi’ today refers to those who speak Gondi language.

In Telangana the Raj Gonds are mostly confined to Adilabad district, though a few groups can be seen in adjoining Karimnagar district. They have spread up to borders of Maharashtra state.

Patil/Patla, the head of a village, is considered the first citizen, while his wife feels that she is the first lady. He generally undertakes to extend hospitality to others and visiting officials. A lady is extended highest respect in the community. A widow is not looked down upon, as in other communities.

Village council / Panch decides dates for festivals, marriages and funerals. Last rites when one dies involve all the villagers. In small, medium sized villages all share meal during such occasions. The rich in major villages play the host while the Panch decides how many need to dine in marriages of not so rich people. Others attend, bless and show generous approach. Same norms are followed during last rites of the dead.

The rules of an area ‘Raja’ used to get share in the fines imposed, taxes collected in villages. He is responsible for purification of excommunicated individuals and allowing them to join the mainstream. They also perform rituals to ward off evils and attacks of tigers that turned man-eaters. Dwindling number of attacks by tigers prove the integrity and power of the ruler. He resolves all disputes and local issues referred by the village councils. He also functions as leader of army at his disposal.

Hierarchy, hegemony arrive with birth of a person. Ideological or sectorial impact is conspicuous by its absence. ‘Honour’ or ‘respect’ is accorded greater value and is not related to financial position of an individual in the community.

Pardhans are bards / balladeers of Gond tribals. They are patronized by Gonds. Their inferior status is revealed in their greetings. Gonds greet each other saying “Ram, Ram!”. Pardhans while greeting a Gond says “Deewanji!”.He bows and salutes. A Gond never greets Pardhan with the expression “Ram, Ram!” He just waves his hand or says “Chokat marthi patadhi,” [are you fine?].

Pardhans are honorary advisors or assistants only. Yet, they are protectors of Gond traditions and culture. Gond historical, mythological accounts survive even today owing to the presence of and service rendered by Pardhans. If these bards / balladeers stop singing, Gond culture collapses. Only through their oral transmission Pardhans sustain socio-mythological-cultural system among the members of the community. Otherwise Gonds cannot recollect or know anything related to their clan or heritage.

Changing socio-cultural-financial contexts resulted in dwindling relationship between the bard and patron. Not many Pardhans today are totally dependent on their patrons. In agriculture, education and cattle rearing they compete with their earlier patrons. Some of them have become quite wealthy.

Pardhans narrate not only the lineage of one family but those of several Gonds. They resemble folk tales narrated as in any other place / country. V.Elwin collected them and compiled in the book titled The Oral Literature of Middle India. An interesting aspect is Gonds enjoy the songs of Pardhans but value or respect the performance of wandering bards or singers of other communities. They support Pardhans due to traditional constraints or practices only.

Despite apparent differences related to language and culture, the relationship between Pardhans and Gonds is historically validated and irrefutably strong, more so among Raj Gonds of Adilabad. One may mention the impact and relationship of bards of different castes with the families which depend entirely on agricultural operations in India. Their influence on socio-cultural aspects is palpable and undeniable.

A major contribution of Pardhans is fusion of Hindu and Gond mythologies and folk tales. Their music, narration, language and lifestyle distinguish Pardhans from Gonds. It resulted in amalgamation of these two cultures. Total absorption seems to be a distant dream.

‘Ghotul’ is specific to Gond and Muria tribes. Gonds trained their young men and women of marriageable age in the institution of Ghotul.It is a circular thatched hut located outside the main dwelling area of the community. The walls are supported by strong wooden logs. A sort of dormitory for the youth to stay together and spend the night. They start with slow clapping and dancing together, sprinkled with lively banter, boisterous laughter and continue till very late hours in the night. This gives an opportunity for them to know each other more intimately. It was not meant to be a place for satiating carnal desires. In those days when formal educational institutions were not located in those remote and at times inaccessible places, Ghotuls served as the training centres for Gondi youth in acquiring refinement in their behavior. A sense of propriety, discipline, mutual trust as well as respect for one another, love and affection for the beloved were inculcated there. Some historians projected this special way of training the youth by Gonds adversely, stating babies were born out of wedlock and were accepted by men who married the girls subsequently. Use of contraception was unknown those days. The British rulers too suspected that conspiracies were hatched there and did their best to wreck Ghotul institution among Gonds. What remains today is only the pale shadow of once brilliant and noble manner of preparing youth to get married and live in harmony with their life partner. V. Elwin pays glowing tribute to Gonds and the Ghotul institution in his works. Some people opine that Ghotul institution has been contemplated initially to ward off tigers and other animals with the loud noise of songs and music and the wakeful youth would keep a watch and drive away any animal that tries to attack their community.

Gondi language is known as ‘Koyator’ among Gonds. Southern Gondi, Adilabad Gondi, Northern Gondi, Aheri Gondi are variants of the language. Though a majority of the people can understand the language, not many can read or write in the language.Efforts have been made earlier to find script for it. It is written either in Devnagari or Telugu scripts.Munshi Mangal Singh Masram devised a Brahmi lipi based script in 1911.But it did not receive much acceptance nor patronage.

In 2014 a research team of University of Hyderabad under the leadership ofProfessor Jayadheer Tirumala Rao located around a dozen manuscripts written in Gunjala Gondi script. Since it was found in the village Gunjala in Adilabad District of Telangana, it acquired the name.

The manuscripts have been dated to approximately 1750, based on knowledge from Gondi pundits and researchers at the Center of Dalit and Adivasi Studies and Translation (CDAST).The information contained in the manuscripts includes that of the names of the months and days, a horoscope chart, grammar, and numbers. Additionally, manuscripts were found on "knowledge of the seasons, history, and the Gondi code of ethics and literature." The characters themselves, while bearing resemblance to similar phonemes found in other Indian scripts, are in a different, "native" order, as the script starts with the letter "ya" instead of the traditional "ka" for other Indian scripts. The script includes 12 vowels and 25 consonants.

The script has seen a very welcoming response by various government agencies in Andhra Pradesh, at the national level, and local agencies in the region. The existence of the manuscripts has allegedly been known for 5–9 years, but were not prioritized until 2013, when Prof.Jayadheer Tirumala Rao discovered that only four elders in the village were still able to read the script. At present approximately eighty students are able to read the script, with students devising stories and elder Kotnak Jangu writing an autobiography. Plans are in place for the expansion of the script to fifteen other government schools in villages with a high Gond population. A reader for the script in Telugu was released for Standard I students. Efforts are being undertaken to get the script into the Unicode standard. In 2015, a Unicode proposal was written by Anshuman Pandey from the Department of Linguistics at the University of California, Berkley. The proposal was approved by the Unicode Technical Committee in November 2015.This information was collected from Wikipedia.

Gond paintings resemble art work of Aboriginals in Australia where they use dots and connect to create a work of art.This is similar to drawing ‘Rangoli’ in many parts of India where dots are connected forming floral designs and powder in different colours is used to fill the empty blocks.


Jangarh Singh Shyam was the first Gond to use paper and canvas to paint. Gonds till then were painting on walls with soil,natural colours, leaves and bark of trees, charcoal and dung.By smearing dung and soil a smooth surface was readied. On it they were drawing pictures and painted their works. They mostly painted drawing inspiration from mythological or folk tales, Nature and life around them found excellent expression in their works.A few of the paintings are presented here.

Gussadi is the traditional dance of Gonds of Adilabad.This dance is performed during festivals more so to mark Dasara, Diwali, village festivals and important events.The Gussadi dancers are received well, taken care by the hosts and offered good food, money as well as hospitality. Everywhere they are  treated affectionately, reverentially as they represent the essential culture and spirit of Gonds as well as their Gods. Donning a head gear with Peacock plumes in plenty, garlands and necklace of shells and cowries bouncing on their chests, clad in colourful costumes they smear their faces with ash or colours. Dancing in a circle, forming patterns, they jump into the groups of on lookers around them to shock or amuse and create an animated ambience and charge environment with festive cheer and enrich celebrations. Their gusto and love for life are commendable. 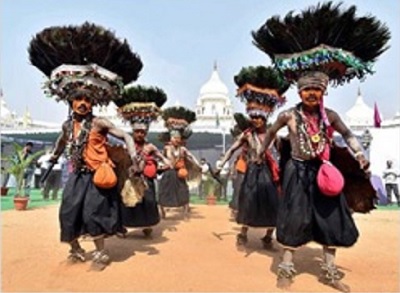 Raj Gonds of Adilabad district in the state of Telangana occupy a significant place among the tribal communities of India.Central Government and State Governments are extending all possible support to ensure they lead a respectable and better life.At present, it is very difficult to identify them in urban places, as they dress, speak and work like all others in cities.It is hoped that they catch up with others comfortably soon.

[This paper was a part of presentation made in CALA2019 at Siem Reap, Cambodia.Included in Conference proceedings of CALA2019]