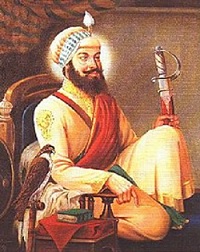 The story associated with the birth of Guru Hargobind Sahib Ji is known to most Sikhs. He was born with blessings of Baba Budha Ji. Mata Ganga Ji, Guru Arjan Dev Ji’s wife had prepared food with her own hands and carried it on her head to Baba Budha Ji on foot to Wadali. Baba Budha Ji delightfully accepted the food and blessed her saying; “A son will be born to you who will crush enemies like I am crushing this onion with my palm.”

Mata Ganga was expecting a child after almost 16 years after her wedding. At the malicious instigation of Prithi Chand, Guru Arjan Dev Ji’s elder brother. Sulhi Khan the Mughal army General was coming to arrest Guru Arjan Dev Ji. So, Guru Arjan Dev Ji at the advice of Baba Budha Ji had moved his family to Wadali. The son, Hargobind Rai was born there (it is also known as Guru Ki Wadali) on 19th June in 1595. At that time, there was severe drought in Punjab and it had deeply affected the people, crops and animals were dying because of scarcity of food and water. To commemorate the occasion of the birth of child Hargobind, Guru Ji got a well dug in Wadali to alleviate the suffering of masses. The well was so wide and with abundant supply of water that Guru Ji got six Persian wheels installed there to draw water. The place became a landmark known by the name Chheharta (meaning six Persian wheels). 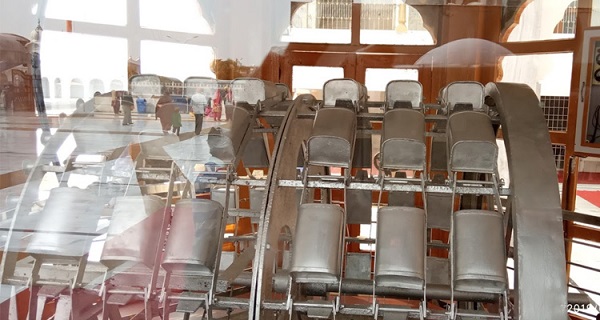 We can see here that even the celebration to commemorate the birth of the child becomes an occasion to carry out a philanthropic deed. Guru Ji thanked the Almighty in these words:

“Satigur saachai dheeaa bhej. Chir jeevan upajiaa sanjog.” — (SGGS, Pg. No. 396)
Translation: The True Guru has truly given a child. The long-lived one has been born to this destiny.

In the concluding line Guru Ji says that this is not a hidden secret; the child birth is the blessing and Almighty has bestowed this gift. However the special gift was unpalatable to Guru Ji’s elder brother Prithi Chand. He had his eyes on the Guruship for his son Meharban. He made numerous attempts on the life of child Hargobind. However, the attempts went futile, but Guru Arjan Dev Ji asked Mata Ganga to comeback to Amritsar to prevent further attempts on the child’s life. At that time there was smallpox epidemic in Amritsar area and the child Hargobind became its victim. As there was no cure for it, still Hargoind survived and Guru Arjan Dev thanked the Almighty for the providence in these words:

As a child Hargobind was instructed in the subjects of spirituality and religion by Bhai Gurdas Ji and use of arms by Baba Budha Ji. After the cruel execution of Guru Arjan Dev Ji on 30 May 1606, Hargobind was anointed as the successor Guru at very young age of eleven. The young teenager was now shouldered with the higher responsibilities not just of the family but of the entire community. Even at that young age Guru Hargobind was determined to lift the sagging spirits and infuse a new vigor in them. He gave the inkling of the intention by donning two swords of Miri and Piri representing spiritual and temporal interests. He never backed away from the spiritual aspects as can be seen from the fact that he forgave Jahangir for the execution of his father Guru Arjan Dev Ji. Bhai Gudas Ji shares that aspect in these words:

But the great martyr’s sacrifice and blending of light with light did not have any influence on the soul. This was reaffirmed by Bhai Gurdas Ji who stated that the souls of the two Gurus were the same, but the bodies changed in these words:

Earlier during the invasion by Babur, Guru Nanak Dev Ji had lashed out at the ebbing patriotism of his people, now Guru Hargobind Ji realized the need to infuse new blood had come. The ruthless persecution of Guru Arjan Dev Ji had convinced the Sikhs that arming in defense was an inevitable necessity for the survival. Guru Hargobind Sahib gave this a concrete shape in by donning two swords, reminding Baba Budha Ji of his prophesy. Besides that Guru Ji initiated construction of Akal Takht in front of Sri Harimander Sahib in 1606 itself to address spiritual and temporal issues of the Sikhs. The edifice was signaling service, sacrifice, and defiance of royal authority. The defiance along with establishment of counter center of authority did not sit well with the royalty.

This resulted in stained relations and Jahangir summoned Guru Ji for a face to face meeting. Guru Ji went to Delhi but was taken state prisoner and sent to fort of Gwalior in 1617. However because Jahangir’s ill-health and intervention of Wazir Khan and Mian Mir, Guru Ji was released after the stay lasting 2 years and 3 months in October, 1619. Even in his release Guru Ji provided succor to 52 other royal inmates who were released by each holding a tassel of Guru Ji’s custom designed robe, earning him the honorific of “Bandhi Chor Satguru” meaning True Guru Deliverer of Freedom. Later on Jahangir became friendly with Guru Ji. After his death in 1628, his son Shah Jahan succeeded him. On assuming power, Shah Jahan changed the state policy towards non-Muslims. As a result, the baoli (water tank) in Lahore had been desecrated by filling it up with soil and built a mosque atop. This ratcheted up the tensions and all that was needed was a slight provocation for a fight to start. Four battles soon ensued in a quick succession as described below.

Guru Ji was never an aggressor, nor did he ever fight for wealth, land, property or for women. The battles were essentially in self-defense. The success in these battles instilled Sikhs with new found zeal, and self-confidence which was lacking earlier.

During the second battle Guru Ji realized that the battles with rulers will be inevitable so Guru Ji decided to pick a spot and develop a city which will be center of preaching and spreading Sikhism. Guru Ji picked the place and named it Keeratpur. This place had been visited by Guru Nanak Dev Ji during his first journey to the east. Baba Gurditta, the oldest son was assigned the job of developing this city. Guru Hargobind retired to Keeratpur and spent last ten years of his life there. He breathed his last on March 03, 1644. Guru Har Rai his grandson succeeded him. Guru Sahib developed other cities/places named – Lohgarh, Sri Akal Takht, Dera Sahib Lahore, Keeratpur, Hargobindpur, Mehraj, Kaulsar, Bibeksar, and Gurusar.

His lasting legacies, besides Akal Takht are introduction of Dhaadi Waaran and Gatka – the martial traditions. With these two alone, Guru Ji brought about the magical transformation of the Sikhs to brave, confident, determined, men of steel and a martial race. Thus, he infused new blood in the Sikhs whose spirits were at a low ebb after the cruel execution of Guru Arjan Dev Ji. Guru Hargobind Ji never left his cool even in the midst of battles despite the challenging circumstances. No wonder he is always remembered as the Saint-Soldier.