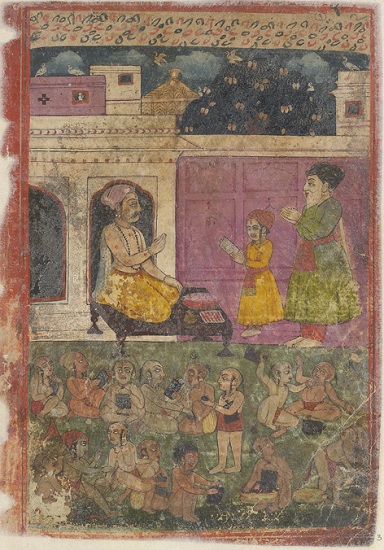 The bani of “Patti Likhi” is the first lesson imparted by Guru Nanak Dev Ji using the Alphabet letters to convey their spiritual significance. As per the Puratan Janam Sakhi, when Guru Nanak Dev Ji was 7, his father Mehta Kalu Ji took him to Pandha named Gopal for getting education. Pandha wrote the 35 letters of the Alphabet on a Wooden Tablet (called Patti in Punjabi) to master. 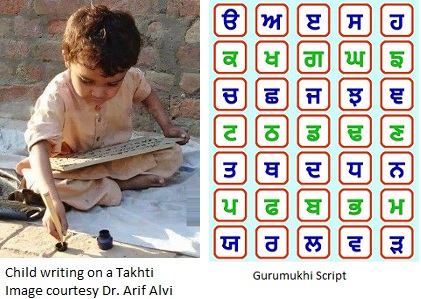 Patti is a wooden flat tablet which is coated with yellow clay paste and then dried in the sun. Then with a sharpened reed pen the alphabet is written over it. It can be washed and recoated and used again.  This school is at a very short distance from Gurudwara Janam Asthan in Nankana Sahib where Guru Ji was born. 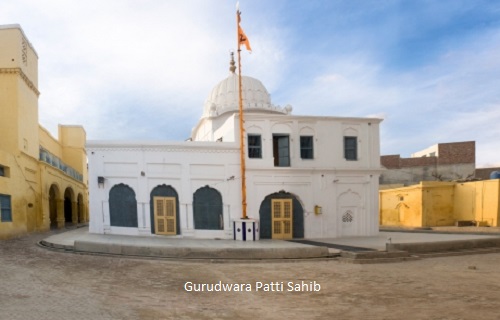 One day during school Guru Ji sat in a corner away from rest of the students deeply engrossed in writing and humming while writing. Whole day passed and Guru Ji had not shown his work to Pandha. Before the end of class, teacher called Guru Ji asked him to show his assignment. Guru Ji brought 3 Pattis and handed first one over to Pandha, while holding the remaining 2 in his hands. Gopal was stunned to see acrostics - praises of God using all the letters of Alphabet.  Gopal struck in awe asked Guru Ji, why he does not learn what his father wants him to learn? He reminded Guru Ji that he will be taking over from his father the property accounts of the village and will be managing those. Guru Nanak Dev Ji replied, “That knowledge will not in any way help you in obtaining liberation”. The teacher was very much astonished at the words of the young child. Pandha told him, “Nanak, tell me something which could help me in the attainment of salvation”. Then Guru Ji gave a complete discourse which is part of Guru Granth Sahib on Page 16, but for our discussion let us restrict ourselves to Patti.

Pandha was very impressed as he saw in the child Nanak making of a great man. He recommended to Guru Ji’s father that he should be under charge of Pandit Brij Nath, who can teach him Sanskrit and scriptures, as he does have anything more to teach child Nanak. Now, let us briefly review the translation of bani Patti letter by letter:

Sassa: He, who created the world, is the One Lord and Master of all. For those, whose consciousness remains committed to His remembrance (in Service) - blessed is their birth and their coming into the world. ||1||

O mind, why forget Him? You foolish mind! When you have to render your account, and balance due is cleared, O brother, only then shall you be judged wise. ||1||Pause||

Eevree: The Primal Lord is the Giver; He alone is eternal. There is no outstanding balance due from the Gurmukh, who understands the Lord through these letters. ||2||

Ooraa: Sing the Praises of the One whose limit cannot be found. They alone obtain the fruits (of achieving purpose of life) who serve Him (by meditating) becoming truthful. ||3||

Nganga: One who understands spiritual wisdom becomes a Pundit, a religious scholar. One who recognizes the One Lord among all beings does not talk in ego. ||4||

Kakka: When the hair grows grey, then they shine without shampoo. The hunters of the King of Death come, and bind him in the chains of worldly attachment (Maya). ||5||

Khakha: The Creator is the King of the world; He owns all of us as He is providing sustenance (of breath to live). By His Binding, the entire world is bound; no other Commands prevail. ||6||

Gagga: One, who renounces singing of the songs of the Lord of the Universe, becomes arrogant in his speech. One who has shaped the pots, and made the world the kiln, decides when to put them in it (and out). ||7||

Ghagha: The servant who performs service, remains attached to the Word of the Guru's Shabad. One who recognizes bad and good as one and the same - in this way he is absorbed into the Lord and Master. ||8||

Chacha: He created the four Vedas, the four sources of creation, and the four ages - through each and every age, He Himself dwells in all as the Yogi, the house-holder, the Pundit and the scholar. ||9||

Chhachha: Ignorance exists within everyone; doubt is Your doing, O Lord. Having created doubt, You Yourself has caused them to wander in delusion; those whom You bless with Your Mercy meet with the Guru (and their ignorance removed). ||10||

Jajja: That humble being who begs for wisdom has wandered begging through 8.4 million incarnations. The One Lord takes away, and the One Lord gives; I have not heard of any other. ||11||

Jhajha: O mortal being, why are you dying of anxiety (for possessions)? Whatever the Lord is to give, He shall keep on giving. He gives, and gives, and watches over us; according to the Orders which He issues, His beings receive destined sustenance. ||12||

Nyanya: When the Lord bestows His Glance of Grace, then I realize there is no second (who can provide). The One Lord is totally pervading everywhere; the One Lord abides within the mind. ||13||

Tatta: Why do you practice hypocrisy (exhibiting your assets), O mortal? In a moment, in an instant, you will depart from the world. Don't lose your life in the gamble - hurry to the Lord's Sanctuary. ||14||

T’hat’ha: Peace pervades within those who link their consciousness to the Lord's Lotus Feet. Those humble beings, whose consciousness is so attuned, are saved; by Your Grace, they obtain peace. ||15||

Dadda: Why do you make such ostentatious shows, O mortal? All that exists shall all pass away. So serve Him, who is contained and pervading among everyone, and you shall attain eternal bliss. ||16||

Dhaddha: He Himself establishes and disestablishes; as it pleases His Will, so does He act. Having created the creation, He watches over it; He issues His Commands, and emancipates those, upon whom He casts His Glance of Grace. ||17||

Naana: One whose heart is filled with the Lord, sings His Glorious Praises. One, whom the Creator Lord unites with Himself, is not consigned to reincarnation. ||18||

Tatta: The dreadful world-ocean is so very deep; its limits beyond reach. I do not have a boat, or even a raft (of spiritual wisdom); I am drowning - save me, O Savior King! ||19||

T’hat’ha: In all places and interspaces, He is; everything which exists is by His doing. What is doubt? What is called Maya? Whatever pleases Him is good. ||20||

Dhadha: His power established and upholds the earth; the Lord has imparted His color (beauty) to everything. His gifts are received by everyone; all act according to His Command. ||22||

Nanna: The Husband Lord enjoys eternal pleasures, but He is not seen or understood (by me). I am called the happy soul-bride, O sister, but my Husband Lord has never met me. ||23||

Pappa: The Supreme King, the Transcendent Lord, created the world, and watches over it. He sees and understands, and knows everything; inwardly and outwardly, he is fully pervading. ||24||

Faffa: The whole world is caught in the noose of Death, and all are bound by its chains by agents of death. By Guru's Grace, they alone are saved, who seek to enter the Lord's Sanctuary. ||25||

Babba: He set out to play the game, on the board game dice cloth of the four ages. He made all beings and creatures his pawns, and He Himself threw the dice. ||26||

Bhabha: Those who search find the fruits of their rewards; by Guru's Grace, they live in the Fear of God. The self-willed manmukhs wander around, and they do not remember the Lord; the fools are consigned to the cycle of 8.4 million incarnations. ||27||

Mamma: In emotional attachment, he dies; he only thinks of the Lord, the Love of Nectar, at death time. As long as the body is alive, he keeps reading other things, and forgets the letter 'M', which stands for marnaa – death and Madusoodan- God. ||28||

Yayya: He would never be reincarnated again, if he recognizes the True Lord. The Guru-oriented speaks, understands, and knows only the One (All pervading) Lord. ||29||

Rarra: The Lord is pervading among all; that He has created. Having created His beings, He has put them all to work; they alone remember the Naam, upon whom He bestows His Grace. ||30||

Lalla: He has assigned people to their tasks, and made the love of Maya (worldly attachment) seem sweet to them. We eat and drink; endure pain and pleasure equally whatever occurs, by His Will, by His Command. ||31||

Wawa: The all-pervading Transcendent Lord beholds the world; He created the form it wears. He beholds, tastes, and knows everything; He is pervading and permeating inwardly and outwardly. ||32||

Raara: Why do you quarrel, O mortal? Meditate on the Imperishable Lord, and be absorbed into the True One. Become a sacrifice to Him. ||33||

Airaa: He Himself created the world; whatever He has to do, He continues to do. He acts, and causes others to act, and He knows everything; so says Nanak, the poet. ||35||1||

Conclusion: The summary of the message is that the entire world is God’s Creation, and runs as per His Will. We are just like pawns in the grand scheme and we should always remember Him. Guru Ji’s core message is in the Rahao line (Bold letters above) after the first stanza, where Guru Ji’s says learn to stay on track on the purpose of life. First, start with understanding of the world where you live in. Next understanding the purpose of life, stay focused on achieving the objective. Success is only achieved by those who stay focused and clear about their objective. Here, Guru Ji has addressed his mind by it as brother, reminding it that it will have to render account of how the capital of breath which is life has been utilized. There it will be judged as educated if it made the right choices.