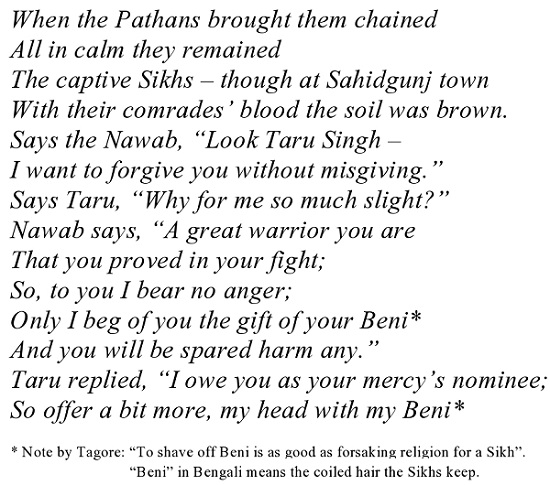 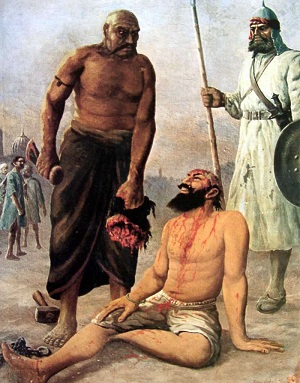 The above is English translation of a beautiful poem in Bengali by Nobel laurate Poet Rabindranath Tagore on Bhai Taru Singh’s heroism, courage and supreme sacrifice. In earlier times, these tales of greatness formed the part of our national heritage in India. But, today, hardly anybody seems to be aware of them. Can we imagine that few generations back all the Bengalis had read the poem Tagore wrote, yet today even the Sikhs don’t know about Bhai Taru Singh, despite the fact that he gets mentioned in our daily congregational Ardas (prayer).

The degree of suffering that he underwent is mind-boggling. That is why telling and remembering the story of Bhai Taru Singh is so important, if we are to understand the history of Sikhs and city of Lahore its capital.

The partition of the country in 1947 and new educational books post-independence have sanitized the school textbooks, making them devoid of such inspirational stories for the young brain. 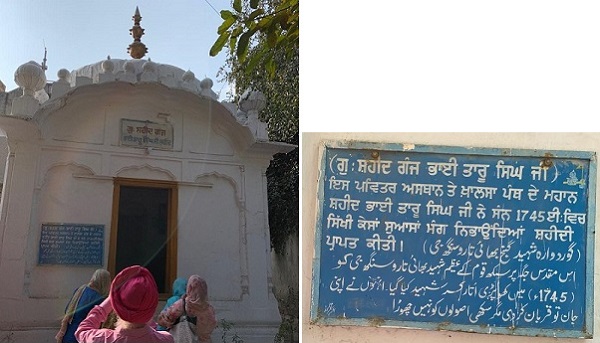 So, let us start with a tour of once-walled city of Lahore by choosing to head in opposite direction of Delhi Gate. There is the Shaheedganj Gurdwara, the place where over 10,000 Sikhs were butchered in a week’s time by the butchers of Lahore on the orders of the Afghan governor Yahya Khan. Their bodies were thrown in a well nearby. That well is now known as Shaheedi Khoo. Near the Shaheedganj Gurdwara is the spot where Bhai Taru Singh was executed on June 09, 1745. The memorial there is known as Gurudwara Shaheed Bhai Taru Singh.

There is a line from Ardas where we remember those who stayed firm in their faith as:

Translation: Think about and remember those brave Sikh men and women, who sacrificed their heads but did not surrender their Sikh Religion; who were cut to pieces from each of the joints of the body; who got their scalps removed…”

“Jinaa Singhaa Singhneeaa” Is in the remembrance of those who laid down their lives for their faith, as in Shaheedganj.

“Bandh Bandh Katai” Is in the remembrance of sacrifice of Bhai Mani Singh.

“Khopreeaa Lahaeeaa” Is in the remembrance of sacrifice of Bhai Taru Singh.

Bhai Taru Singh was a young farmer in village Poohla, Amritsar District, who was known for providing shelter and food to all those who were fleeing Afghan persecution. In those days the authorities in Lahore had a lot of informers, and a spy from Jandiala named Akil Das (called Harbhagat) who informed the governor of the Punjab, Zakariya Khan, that Taru and his sister were providing food to Sikh fighters hiding in a nearby forest. They were, allegedly, part of a plot to overthrow the governor.

Zakariya Khan asked, “From where do the Sikhs obtain their nourishment? I have debarred them from all occupations. They realize no taxes. They do not farm, nor are they allowed to do business or join public employment. I have stopped all offerings to their gurdwaras, their places of worship. No provisions or supplies are accessible to them. Why do they not die of sheer starvation?”

Harbhagat replied; “There are Sikhs in this world, who would not eat until they have fed their brethren. They may themselves go without food and clothing but cannot bear their comrades’ distress. They would pass the winter by fireside and send them their own clothes. They would sweat to grind corn and have it sent to them. They would do the roughest chore to earn a small wage for their sake. They migrate to distant places to eke out money for their brothers in exile.” Zakariya Khan decided to teach the Sikhs a lesson.

At the orders of Zakariya Khan both Bhai Taru Singh and his sister were arrested and brought to Lahore. His sister was released after villagers raised money for her release, and after promising never again to assist strangers. But Taru Singh, 25 years old was made of firmer stuff and refused to apologize for feeding those in need. He was presented before the governor, and he defiantly greeted him with the Sikh salutation: “Waheguru ji ka Khalsa, Wahiguru ji ki Fateh.” On hearing these words the governor went into a rage and as was the practice he ordered that Taru either become a Muslim or would be punished. If he refused to become a Muslim, he would be executed. Bhai Taru Singh Ji had taken amrit from Bhai Mani Singh Ji and was really inspired by him and stirred by his sacrifice in 1737. On hearing this he retorted: ‘Why must I become a Muslim, do they never die?’

Next, Zakariya Khan upped the ante by offering a high position with the government and a marriage with beautiful girl from the royal Mughal family, if he embraced Islam. Bhai Taru Singh refused to give up his faith. He told the Governor Zakariya Khan, “Even if I were offered the kingship of whole world and the beauties of paradise, I will not barter my faith.” The answer really dismayed Zakariya Khan and he wanted to find out from where the Sikhs got their firm faith. He was told that it was from their long hair. Zakariya ordered that his hair should be cut by force. Bhai Taru Singh was not less determined and would not budge. Bhai Taru Singh said, “My hair was inseparable from my scalp.” Zakariya Khan called a cobbler and ordered him to cut the scalp of Bhai Taru Singh with his cobbler’s chisel. Amidst the torture of scalping Bhai Sahib could only be heard reciting Japji Sahib. After this he was taken to Lahore Fort and imprisoned and tortured again to die slow death.

During this time Zakariya Khan became seriously ill and was unable to pass urine. His abdomen swelled up and he was very uncomfortable because of intense pain. Zakariya realized that he was suffering because of his atrocities on the Sikhs. So, he sent a messenger, Bhai Subeg Singh to Bhai Taru Singh and asked for his forgiveness. Bhai Taru Singh was in high spirits and in state of bliss despite his sufferings. He forgave Zakariya Khan saying, “Everything happens in God’s Will. I have no ill will against you. You will have to settle your own account in God’s court. Remember you will be there before me.” After surviving for 22 days, the Governor died on the 1st July, 1745 A.D. Bhai Taru Singh gave up his mortal body few hours later after hearing about the death of the Governor.

On the occasion of his memorial, we have wonder about what is going on with us today. For Bhai Taru Singh the inspiration of his faith was from the city of Amritsar. He was willing to give his life but not his hair. Today, the same city of Amritsar is mushrooming with men’s hair salons, offering their services for hair grooming (fashionable word for hair cutting). It makes us wonder as to what is happening in the city of Gurus “Guru Ki Nagari”? The holiest place of Sikhs, who keep long unshorn hair, has become a haven for hair grooming. The city boasts a disproportionate share men’s hair grooming parlors. I do not have an answer for this situation facing us today nor can I offer a solution. I am just making my prayer to Bhai Taru Singh to help us find a solution to this strange conundrum we find ourselves in.

Let us not forget our heritage, and reignite the spirit of faith. Bhai Taru Singh Sacrifice inspired Tagore, 1000 miles away to pen a poem on his firm faith in Bengali. Now we the Sikhs needs similar inspiration to tread on path that Guru’s given gift of hair becomes essential to our faith and not to be parted with. Our prayers to our Guru Ji be, make us firm in faith as Bhai Taru Singh was, and the words of prayer be for boon of unshorn hair "Sikhi kesan swasan naal nibhai" and "Sikhi daan, kesh daan".