Written jointly with A. Harindranath

A Note on 10 volumes of editions by Prof Kalamandalam Ishvaranunni

Melputtur Narayana Bhattatiri (16th Century) is famous among devotees of Lord Guruvayurappan (Lord of Guruvayur, Kerala – Krishna-Vishnu) for his Sanskrit devotional poem Narayaniyam, a beautiful condensation of the Bhagavata Purana. Among Sanskrit scholars, his grammatical works Dhatukavya and Prakriyasarvasvam are well-known.

Melputtur composed a large number of Campu Prabandhams—a mixture of poetry and prose—based on episodes of Mahabharata, Bhagavata and Ramayana. According to legend, many of these Prabandhams were composed for use by his friend Kuttanceri Iravi Cakyar, a renowned performer of Cakyar Koothu (a monologue enacting Puranic tales) in those days.

During Cakyar Koothu, a ritual held in Kuttanpalam (a part of the large Kerala Temple Complex) Cakyar ‘sings’ Sanskrit shlokas from Campu Prabandhams and explains the meanings in detail in Malayalam. The singing is accompanied by the musical instruments Mizhavu (big copper drum) played by a Nambiar seated behind and Talam (small cymbals) by a Nangiar seated on the floor beside the Cakyar. Many Sanskrit words have multiple meanings and some words may indicate a particular incident in a Purana. During Cakyar Koothu, Cakyar explains all these minute and subtle details in Malayalam based on his knowledge of Sanskrit, puranic episodes and the time available. ;During a session of about 3 hours, Cakyar may take up only 4 to 5 shlokas, either seated on a stool or standing in ;kuttanpalam (temple theatre) within the temple complex. A Prabandham may take several days to complete depending on the text, the skill and scholarship of the Cakyar. Cakyar is free to point at or mock the audience during Cakyar Koothu.

Campu Prabandhams are also used for another temple ritual, Pathakam, conducted by Nambiars. Pathakam is done by a Nambiar outside the kuttanpalam. He stands throughout. There is no musical accompaniment. Unlike the Cakyar, he cannot point at or mock the audience. Unlike the multiple rituals at the beginning and end of a Cakyar Koothu, there are none for the Pathakam.

The temple traditions of both Cakyar Koothu and Pathakam are held today only as part of essential rituals to be done during annual festivals of a few Temples. In a few Shiva Temples, Mattavilasam koothu is offered as a votive offering by devotees. Gradually these traditions are ;disappearing from the public domain.

Traditionally the texts of Campu Prabandhams were only available with Cakyars as palm leaf manuscripts. Some of these texts were printed about 90 years ago, some copies of which are available in a few libraries. In an attempt to make these texts readily available to interested readers, Prof. Ishvaranunni has started bringing out editions of these Campu Prabandhams since 2014. Each volume has the Sanskrit Text of the prabandham. Each verse is split into words with their grammatical forms (vibhakti). The prose order (anvayam), followed by a gloss on this (anvayarttham), and the Malayalam meaning of individual words are given in these editions, all in Malayalam script.

In this volume, Prof Ishvaranunni gives the details of the performance traditions of Cakyar Koothu and Pathakam. An introduction traces Melputtur’s likely source of Vyasotpatti as the first 90 shlokas of the 63rd chapter of the Mahabharata’s Adi Parva. Melputtur’s text (23 shlokas /prose) is also compared with another Vyasotpatti Prabandham (text of 28 shlokas is given as an Appendix) from Purva Bharata Campu by Manaveda. The source of Syamantakam Prabandham (25 shlokas) is traced to the 56th and 57th chapter of the 10th Canto of the Shrimad Bhagavata Purana. The volume has an end note on the printed editions of Sanskrit Campus from Kerala. The cover shows Jambavan as seen in the depiction of Krishnattam Play – Svayamvaram (Syamantakam) 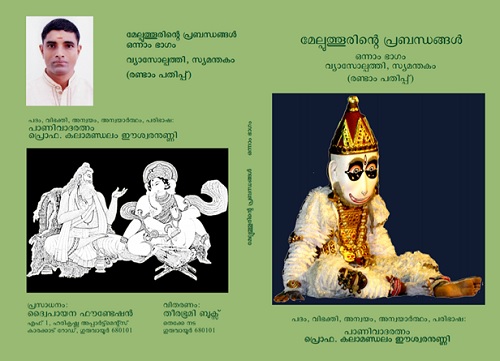 Dutavakyam is based on the Udyoga Parva of the Mahabharata. Krishna meets Dhritarashtra as Yudhishthira’s emissary in an attempt to avoid the impending war. Comparing Melputtur’s text (total 132 shlokas) with the BORI critical edition of the Mahabharata, the introduction indicates the possibility of Melputtur using a different recension of the Mahabharata that is no longer available to us in print today. The introduction points out that similar details are found in Bhasa’s Dutavakyam, and Tamil and Malayalam adaptations of these events. Further, the influence of Melputtur’s Dutavakyam is noted in Kuncan Nambiar’s Patinalu Vrttam. Melputturs’ description of Krishna’s divine revelation is compared with its source shlokas from Vyasa’s Mahabharata. 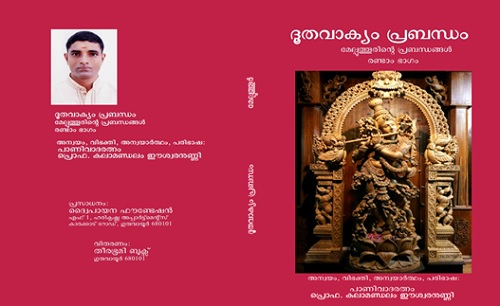 Nrgamoksham deals with the story of King Nrga given in the 87th chapter of the 10th Canto of the Srimad Bhagavata Purana, chapters 53-54 of the Valmiki Ramayana’s Uttara Kanda and the 87th chapter of the Mahabharata’s Anushasana Parva. These chapters are given as Appendices in this volume for the reader’s convenience. Melputtur has composed 64 verses on Nrgamoksham which reflect his genius, scholarship, devotion to the Lord and poetic sensitivity. A variation given in a text of Nrgamoksham Prabandham published by Shuranatt Kunjan Pilla (1955) is also given in this volume. 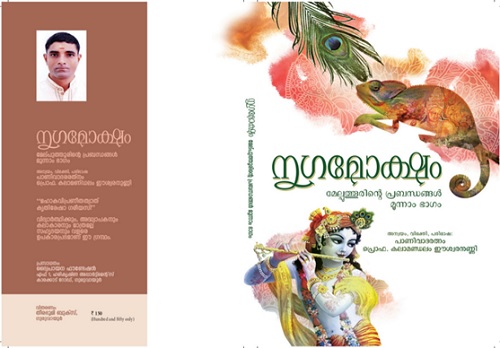 All the three prabandhams in the fourth volume are connected with Shiva.

Kaunteyashtakam, based on chapters 263-264 of the Mahabharata’s Vana Parva is a small Prabandham of 8 shlokas, describing the events during Sage Durvasa’s ;visit to the Pandavas during their exile. The shlokas of these adhyayas are given in this volume for ready reference.

Tripuradahanam Prabandham has 13 shlokas. The story is given in the Vishnu Purana, Mahabharata, Harivansha, Bhagavata, Matsya Purana, Shivamahapurana and Lingapurana. Shlokas from Vishnu Purana and Harivansha are given in this volume.

Kailasavarnnanam consists of a long prose passage describing Kailasa (the abode of Lord Siva) in the fluent, scholarly, poetic, dramatic and inimitable style of Melputtur. 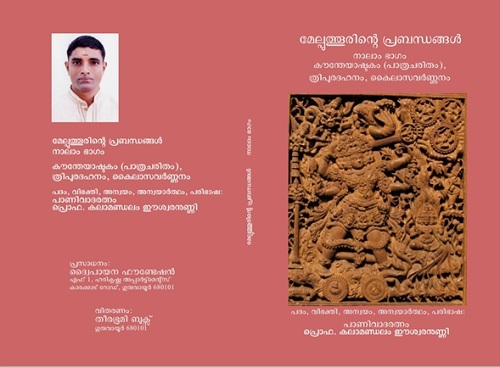 This is a long prabandham of 206 shlokas about Yudhishtira performing the Rajasuya ritual and Krishna killing Shishupala, both from the Mahabharata. Melputtur’s technical knowledge of Rajasuya ritual is fully reflected in this scholarly composition. His incomparable skill of composing verses implying opposite meanings with changes in the word-order can be seen in shlokas 119, 120 and 121 where Shishupala abuses Krishna, opposing ;the choice of Krishna as the prominent person to be honoured during Rajasuya. The cover shows Krishna killing Shishupala with the Sudarshana Chakra as shown in Krishnattam (a votive offering performed at Guruvayur Temple). 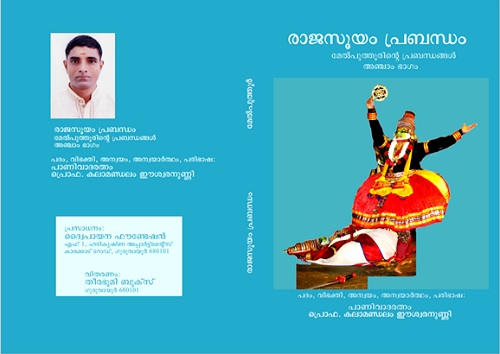 Dakshayagam Prabandham is in 92 verses dealing with the yajna conducted by Daksha without inviting Shiva as described in the Bhagavata Purana, Mahabharata and Shiva Mahapuranam. The text of chapters 24 and 25 of the Sati Khanda (Rudra Samhita, Shivamahapuranam) is given in this volume for the convenience of the readers. 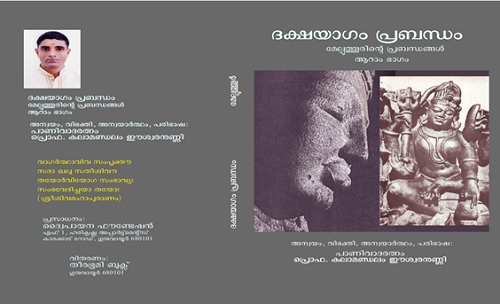 This is a Prabandham in 157 verses, based on the Adi Parva of the Mahabharata. Several verses in it clearly indicate that these were probably based on the Southern Recension of the Mahabharata popular in Kerala during those days. Some examples of these are given in an end note (pp. 222-230). The cover shows the famous painting by Nandalal Bose (1946) in which Arjuna is aiming his arrow at the eye of the fish while looking at its rotating reflection in water. ; 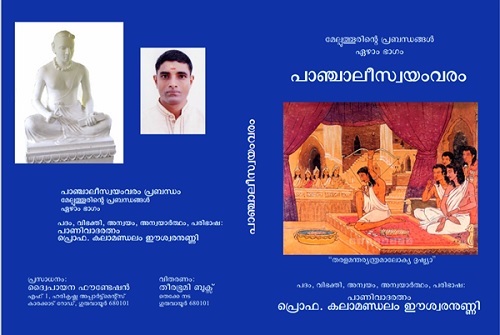 This has 51 verses. For the convenience of readers, the relevant shlokas from chapters 109 and 110 from the Adi Parva of the Southern Recension of Mahabharata published by P. P. S Shastri (1931) dealing with Pancendropakhyanam (story of five indras) and Naitantavacaritam are given in this volume as Appendix A (pp. 60 to 71). Appendix B is a note (pp. 72 to 89) explaining the importance of Nalayanicaritam Prabandham in understanding the meaning and significance of the three dice games in Mahabharata: between Nala and Pushkara (Vana Parva); Shiva and Parvati (Adi Parva-Pancendropakhyanam) and between Yudhishthira and Shakuni (Sabha Parva Dyutam) and the role of Draupadi in these plays. The cover depicts Shiva and Parvati referring to the context of ;dice play in Pancendropakhyanam. 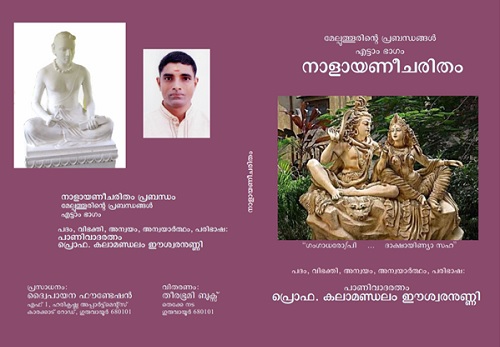 A small prabandham of 49 verses, it describes the story of Kucela based on two chapters from the 10th canto of Shrimad Bhagavata Purana. These shlokas are given as Appendix B. 10 shlokas composed by Melputtur on kucelopakhyanam from his well-known devotional poem Narayaniyam (87th Dashaka) are given as Appendix A. These will help the reader to get a glimpse of Melputtur’s extraordinary skill of both condensation and elaboration. 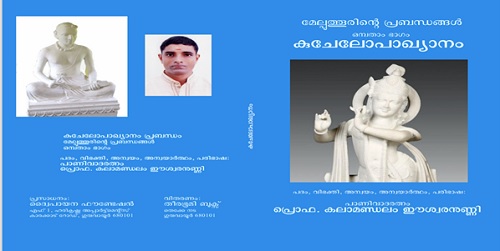 It is based on the Southern Recension of the Mahabharata, with 208 verses. A study of this Prabandham is greatly helpful in understanding the significance of the events in the Mahabharata leading to Subhadra’s abduction and the role of Krishna in these events. 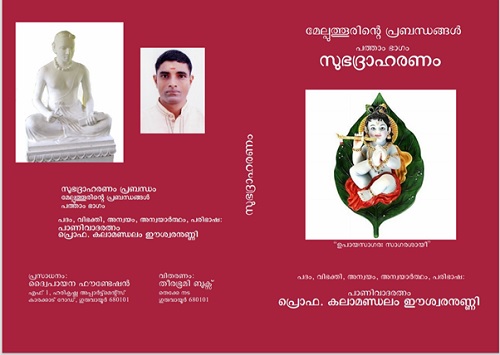