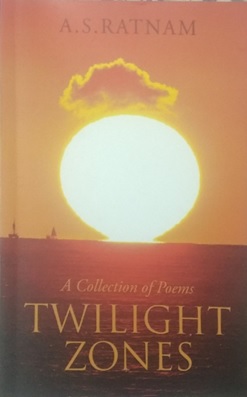 The foreword by an academician Dr K R RAO is brilliant where the poet Archibald McLeish was remembered for his statement ‘A poem should not mean but be.’ He called the poems of the present writer, monuments. He concluded that the bunch is finessed.

In his preface, this poet gives sumptuous praise and admiration to his beloved friend who really goaded him to bring out this first book of poems.

The first poem is about the actuality of present poetry writing

The Book of Life

“Oh! book! ending lost in torn pages
Life ends without the knowledge of what happens to its creation.” (p.8)

This poem has an excellent title itself brings the reader great thrill. Crime and Punishment was published in 1866 by Fyodor Dostoyevsky, the Russian, one of the world's greatest novelists. The story is of a real Raskolnikov, an impoverished student tormented by his own philosophy nearing nihilism, and the struggle between good and evil. The poet has a magnificent quality of finding and choosing a fitting title which is winning half the battle.

There is a saying in Telugu meaning the force of abuse from the self is stronger than the abuse of enemies.

From chinks in a memory
……
My soul slithers snake-like to sink. (p10)

Loneliness causes different feelings in different minds both of men and women. The poet looking around beyond comes to well-considered con conclusions. This is possible only one thinks high and deep, with discrimination.

In real life marriages are not man-made but God ordained. The poet expressed this wisely.

Egos cause all the havoc one experiences or finds around. Realistically

Egos surface and storms throw them asunder
Never to face each other and offspring
Present predicament predicted otherwise? (p.14)

Into that of settlers of yore
Let not my countrymen flee in feigned joy to
Be disillusioned. (p, 16

This is not a parody. To think so is an offence and sin. It is a remembrance of Viswakavi Rabindranath Tagore.

Massive silences
Suspicious glances
Suffocating with lack of confidence.
God in His dispensation
Transformed world gallantly
Only for us to suffer patiently
And endure time’s Unstoppable Fun.

The title, as usual, is well thought of. This is obviously meant to suggest provoking unwanted visitors asking bothersome questions. Luckily the householder ‘endures’, while maintaining silence, unstoppable fun. God and His dispensation are thought of with patience.

Walking like a zombie
Holding on precariously
To life’s lissom strands. (p20)

Like many, many more of this poet’s compositions this is thought provoking. Mind, problems, devices to solve. The human condition at ripe old age is described well. Not all people are so unfortunate. The last line, confusion confounded, is insufferable.

Birth and growth guided hitherto,
Now bereft of water the life force
Diminished in quality of mind and body
Men are now predators not protected any more. (p.26)

Deterioration of basic values devastate mankind. Man’s watchfulness and watchfulness are in the lowest ebb. We, all of us, must show obedience and understanding of the actualities and fulfil our obligations. Morality and forward looking alone can save us. The poem should be an eye-opener to all of us, all over the world.

The piper of Sabarmati
……

On the endless sea of time the nation’s ship
Unable to steady the course in turbulent water prays
for salvation
And to redeem from the curse of the albatross called democracy. (p.27)

Sabarmati ashram is widely known all over the world now. Mahatma Gandhi’s Ashram makes us think of our lives and our obligations to promote our values, human values.

Albatross takes us to Samuel Taylor Coleridge of Lyrical Ballads. A sailor kills a bird and is punished for that to wear the dead bird on his chest. Our Mahatma knew what is to come for Independence and the decadent leadership values.

The globetrotting virus wreaks havoc
Indiscriminately devastating the earth
Humanity is dwindling fast
Surface unburdened of men and women,
Each scrambling for space on the Ark floating
On fast running ocean of time. (p.30)

There have been epidemics in our country and other countries as well.

Compared to the pandemic now devasting they are bad but not so deadly. Millions are dying, every minute, every hour, every day. World scientists are working round the clockurviv. God knows how we survive.

There is a poem I should not miss commenting on. This is the last and not very deadly serious. But funny too., in a way.

The loss was nothing more than
A failure of the monsoon for the politician
To me, none the less, it is a loss
Not easily retrievable as
Substitutes and replacements hard to find.
(For the loss is that of morals and value) (p.53)

The poet is serious minded, sincere and forward looking too. For a maiden effort. this must I should say - to conclude, it is very promising and brilliant too.