Guru Hargobind Ji was incarcerated to Gwalior fort by Emperor Jahangir between the years 1617 and 1619 (2years and 3 months). Guru Ji was twenty-two years old; at the time he was imprisonment. This is the same prison where another 52 kings had been incarcerated by Emperor Jahangir. These ex-royal inmates were lurching there, either because they had sided with Prince Khurram in his revolt to succeed Jahangir, or failed to pay agreed-upon revenue or after their kingdoms had been annexed upon their defeat in a war. The superintendent of that jail for the royalty was Hari Das. This notorious jail had a reputation that no inmate had ever come out of it alive. 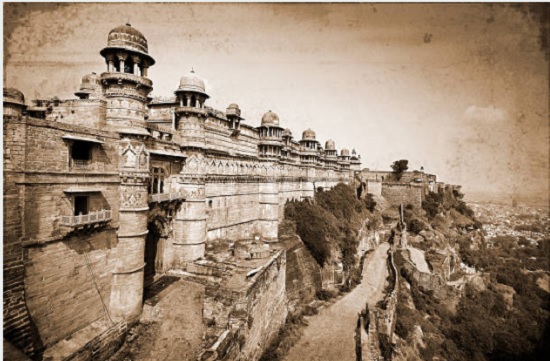 Guru Ji did not feel unnerved by this political shenanigan which Jahangir had employed on his father, fifth Guru Arjan Dev Ji. When Guru Ji arrived there, Hari Das came forward to meet and welcome the new inmate. He prostrated before Guru Ji in a sign of respect and reverence, and in that instant a transformation took place in him as he became a devotee of Guru Ji. Guru Ji refused to eat the food provided for him at the fort. When Guru Ji did not eat food for three days, Hari Das came to Guru Ji and begged him to eat. Hari Das pleaded that food provided sustenance, which Guru Ji was not getting, so he begged Guru Ji to eat. He also expressed his grave concerns that as in-charge of the jail, the health and welfare of the inmates were his primary concern and he would be held responsible for any untoward happening. Further as he had become a Guru Ji’s devotee, he was acutely concerned about detrimental effect of fasting on Guru Ji’s health. Guru Ji replied to him that it is true that food provides nourishment and sustenance, but there is another source of sustenance- that is remembrance of God- which is his support and sustenance. Hari Das was quite bewildered and expressed that remembrance of Lord provided sustenance was beyond his comprehension, added that food was essential for human survival. In the meantime other five Sikhs incarcerated in Gwalior Jail also joined them and they started pleading with Guru Ji to eat as well.

Guru Ji said that the food from the state exchequer was not earned with honest labor, but were proceeds from tax money collected by the state; therefore he will not eat food sourced from it. Guru Ji asked his Sikhs to go to the city of Gwalior and earn money by laboring with their own hands and prepare food from that earning. Interestingly, Hari Das acceded to this request and permitted Sikhs incarcerated with Guru Ji to earn their money.

We all have heard stories related to the personas and autocratic, dictatorial behaviors of jail superintendents. Still in order to get a better picture on how the jail authorities develop their persona, let us look for clues in the book: “The Lucifer Effect” by Philip Zimbardo. In the summer of 1971, social psychologist Prof. Zimbardo randomly assigned some male college students to play role of prisoners and guards in a mock prison he built in a basement at Stanford University. The students had been prescreened for their mental health balance and lack of criminal records. In exchange for the participation, they were paid $15 a day.

It is interesting to know that how this low key experiment turned into hell. The guards took to their duties with an unanticipated appetite beyond the imagination of psychologists running the study. The guards asserted their authority by banging doors; belittling inmates verbally, abusing them, humiliating them, and keeping them awake at night. In fact within thirty-six (36) hours of the experiment one of the “prisoners” broke down and had to be released. Even Zimbardo, who designed the experiment, became a captive of his own grand design. Operating as prison superintendent, he forgot that he was a psychologist doing a study. True like an autocratic ruler, he would not abandon the project despite the calls. Eventually it had to be ended by 6th day as prisoners became increasingly depressed and guards became sadistic (see link: https://www.prisonexp.org/).

The main point that this study established was even the good people with doctorates in psychology can collaborate in doing evil things to others. Zimbardo contends in his book that it is not few bad apples that ruin other apples, but the barrel is what does it i.e. the prisons are toxic. Imagine the prison conditions then, as today 400 years later, with prison reforms and overall improvements in quality of life have resulted in significant improvements in prison environment. Now if we look at what Guru Ji did in Gwalior from that time frame perspective, we can see a miracle taking place. Guru Ji not just transformed the ruthless jail superintendent whose charge included 52 prisoned rulers into a compassionate, devoted and a service oriented person but the quality of life of inmates as well. Those prison inmates, leading a hopeless, miserable life had found new hope because of support, encouragement and counseling provided by Guru Ji. They started following Guru Ji spending time in devotional singing and meditation. This transformational feat is well beyond the normal human endeavor and only an enlightened soul can perform.

In one interesting conversation with Hari Das, Guru Ji said; “I am not a ruler who is lamenting at the loss of my kingdom here in my incarceration. I am a mendicant of God. I spend my time in His remembrance and in His presence. The ruler can imprison my body, but my mind cannot be imprisoned.” Now can we imagine if the wheel of life puts us in such a precarious situation like an imprisonment or even a lonely life because of family circumstances as death of the spouse and with children having moved away because of work? That life will become a nightmare for us. It will be devastating, and we will be blaming others, including God for our fate. We will be trying to impress that we have been wronged by being put in this unfortunate situation. But now we can see how Guru Ji dealt with the situation, by dispensing hope and encouragement. We will notice that he was thankful as it afforded him an opportunity to spend quiet and quality time in meditation besides uplifting other royal inmates.

It is an inspiration for us on how to embrace the unpleasant situation not to our liking or even when it has been wrongfully thrust upon us. Acceptance of the life’s situation in such circumstances is not easy as we will be constantly reminded of the good old days and then mind will start wondering; “Why this happened to me? Why I always get picked for such adverse life scenarios?” We can learn from Guru Ji’s example to use such an adverse situation in bettering the lot of others. It is only when the solitary life becomes loneliness or more precisely a haunting loneliness that it can have a debilitating effect on the mind and body. But Guru Ji has set an example by showing us that there is an alternative, a healthier one, which has a positive effect. In fact, Guru Ji turned the lives of the other 52 ruler inmates from despondency, helplessness, depression at loss of kingdom, power, and position, into an oasis of hope and thankfulness. Guru Ji set an example on how to turn despondency of incarceration and confinement into an uplifting experience. This reminds how Victor Frankl, the Austrian Psychiatrist of Jewish descent learnt this lesson from his imprisonment by Germans during the World War II. He said; “The one thing you can’t take away from me is the way I choose to respond to what you do to me. The last of one’s freedoms is to choose ones attitude in any given circumstance.” This is the model of mental fortitude that Guru Ji has set for us.

Through the offices of Mian Mir and Wazir Khan, Governor of Punjab; Jahangir was convinced to release Guru Ji. Jahangir sent Wazir Khan to Gwalior to personally deliver the message of release. But Guru Ji refused to avail it and told Wazir Khan that his stay in prison has provided succor to other inmates and has improved quality of their lives, so he is quite happy here with them. Wazir Khan made three trips back and forth, negotiating release terms and finally Guru Ji agreed to leave if all the prisoners incarcerated were also set free. Jahangir stipulated a counter condition that only those incarcerated rulers who hold to Guru Ji’s tassel can be released in anticipation that these rulers, being proud Rajputs will not accept such a humiliation of acceptance authority over them.

Guru Ji got a special gown made with 52 tassels and all the 52 rulers came out with Guru Ji with each holding one tassel of Guru Ji’s special long gown. Thus, Guru Ji was hailed as “Bandhi Chhor” – The Great Deliverer or Liberator. Even in his release Guru Ji provided succor to other royal inmates as he snapped their prisoner’s fetters. Imagine a prisoner setting conditions for his own release, and those conditions are altruistic. When Guru Ji returned back to Amritsar, his arrival was greeted with showers of flower petals and fragrances followed by lighting of whole town in the evening. As Guru Ji returned there on the Deewali day every year this day is celebrated there with lighting of the entire Darbar Sahib (Golden Temple) complex. While it was celebration of release of Guru Ji and his return back to Amritsar, it was also a symbolic celebration that when Guru’s light shines inside of our house, which is human body; then all the darkness of ignorance outside is dispelled and there is light everywhere.

No wonder that Bhai Gurdas Ji, who was a close eyewitness to the unfolding of life of Guru Hargobind Sahib Ji described him as:

It is only such an enlightened soul, one with God, can bring about such a transformation in others’ lives and inspire them. We have the privilege to have such Gurus, whose altruistic nature brightens life like the light of Deewali. Even today, their exemplary acts provide inspiration, positive outlook to life, hope and strength. Every year as we celebrate Deewali lighting lamps, let the memory of “Bandhi Chhor” be refreshed in our minds, and a prayer for such mental fortitude and our own deliverance may well-up within us.