Sri Harmandir Sahib, also known as The Golden Temple in Amritsar, has become the world famous religious center of the Sikhs. The name Golden Temple has been given to it because of its gold foil plating on the walls. But the original building was made from burnt bricks and the original name given by the founder Guru Arjan Dev Ji was Harmandir. The word Harmandir means temple of God. In Guru Ji’s vision, the temple would become repository of the Sikh faith, and hallowed symbol of resoluteness of the faith.

A Brief History of Harmandir 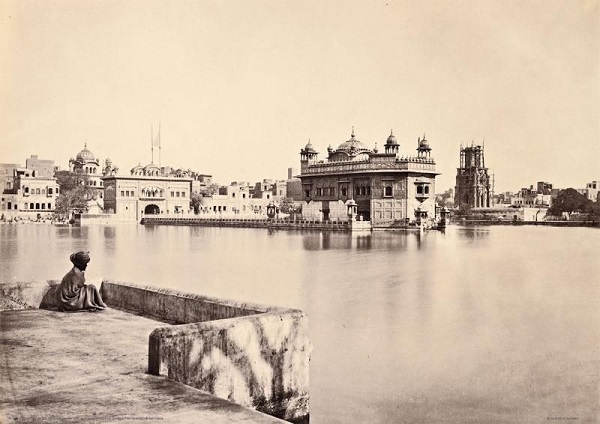 A historic image of Golden Temple

Guru Amar Das Ji (1479 – 1574), the third Guru; after having acquired a piece of land assigned the work of construction of Sarovar (water body tank) to the fourth Guru Ram Das Ji (1534-1581). The work of tank excavation was started in 1570 and completed in 1577. The work of enlarging the tank along with the brick lining the sarovar walls as the tank was known by was completed by fifth Guru Arjan Dev Ji (1563 -1606). The water tank was called Amrit Sarover by Guru Ji. The word means lake of immortality. Guru Arjan Dev Ji conceptualized the architectural design of the Harmandir to be built in the middle of the tank. Most historical records and verbal traditions confirm that the foundation brick was laid by Hazrat Mian Mir (1550 –1635) of Lahore in 1588. His full name was Baba Sain Mir Mohammed Sahib; and he was leader of Qadiri Sufi order of Islam faith. But there are some, who believe that actual foundation brick was laid by Guru Arjan Dev Ji himself. They believe that this story of Mian Mir laying the foundation was made up by Butay Shah (real name Ghulam Muhaiyuddin) in 1848 in his Persian history book on Punjab "Tavarikh-i-Punjab." The construction work of Harmandir Sahib was started in 1589 and completed in 1601. The Temple is described by Ian Kerr, and other scholars, as a mixture of the Indo-Islamic Mughal and the Hindu Rajput architecture. It is amazing to note that despite the Harmandir is in the water body, still there is no dampness because of seepage. This is a salute to engineering acumen employed there. The salient features of the design are: 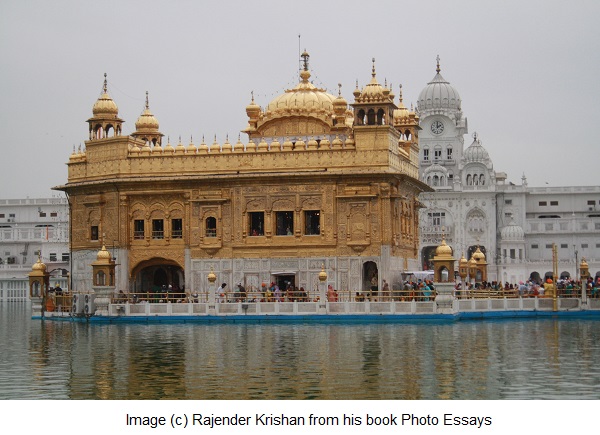 As mentioned above by most accounts, he is said to have laid the foundation brick at the invitation of Guru Arjan Dev Ji. Without trying to solve that issue we will be looking into his life. He was born in Siyostan, Dist. Dadu, in Sind, where he spent his early childhood. He got his primary education in Suluk [=journeying along the spiritual path of return to the source (God)] from his mother Rabia Basaria. He became an orphan at the age of seven. At the age of twelve, he took the oath of allegiance in the Qadiria Order known as ‘Bayat’ at the hands of Sheikh Khizer Siyostani. With the permission Sheikh Siyostani, he arrived in Lahore in 1575, at the age of 25. He had further education in Lahore and became known as a scholar, as well as an accomplished spiritual person.

Guru Arjan Dev Ji was born in 1563, as third and youngest child of Guru Ram Das. He was sent by his father, Guru Ram Das Ji to Lahore in 1579, to represent him at the wedding of his nephew Sihari Mall’s son. Arjan Dev Ji spent about 3 years there, as his instructions were to only return when called back. He was to set up congregations in and around Lahore and preach there. Upon return back from Lahore after test by Guru Ram Das Ji, he was anointed as successor Guru on 16 September 1581. It was during his stay in Lahore that he came in contact with Hazrat Main Mir and two became very close. Mian Mir and Arjan Dev Ji were both very spiritually inclined and would engage in exchange of ideas. He believed in ‘Wahdat-Al-Wajood’ which means “The unity of All Existence” or “The Oneness of Being”. This principle was also preached by Guru Nanak Dev Ji and all the subsequent Gurus. So, we can see that there was alignment of the thought process as well. Guru Arjan Dev Ji said that there is God’s light in everyone – high or low, so we should not discriminate based on status, caste, or faith. Guru Ji expressed about this idea in these words:

When Guru Arjan Dev Ji was arrested on fabricated charges at the instigations of Meharban, son of Guru Ji’s oldest brother Prithi Chand, he was assigned to Chandu in Lahore. Emperor Jahangir was also informed that his son, who had rebelled against him, was given shelter by Guru Ji. According to Jahangir’s autobiography titled Tuzak-e-Jahangir, he records; “Many times it occurred to me to put a stop to this vain affair or to bring him into the assembly of the people of Islam." So, on May 20, 1606 he passed an order to Murtaza Khan in Lahore that property of Guru Ji be confiscated, and he should be killed in keeping with Islamic law of ‘Yasa’. The ‘Yasa’ law means that literally no drop of blood should drop on the floor, thus allowing for capital punishment. After passing the orders he left for Kashmir. Murtaza’s forces arrested Guru Ji from Amritsar.

Guru Ji was made to sit on red hot iron plate and burning sand was poured over his bare body. Next day, he was made to take a dip in a big cauldron of boiling water in peak summer. When Mian Mir heard about the atrocities inflicted, he rushed to the ghastly scene and cried out that “I cannot bear to see these horrors being inflicted on you.” He offered to demolish the tyrant rule and raze city of Lahore where such crimes were being perpetuated.” Guru Ji remained calm and said; “You are perturbed too soon. This is will of my Master (God), and I cheerfully submit and surrender to his sweet will.”

After Guru Arjan Dev Ji’s martyrdom, the sixth Guru Hargobind Ji (1595 – 1644) was incarcerated to Gwalior fort by Emperor Jahangir between the years 1617 and 1619 (2years and 3 months). Guru Ji was just twenty-two years old; at the time he was imprisonment. Mian Mir impressed upon Jahangir that earlier Guru Arjan was tortured to death by his cruel orders and now Guru Hargobind Ji has been wrongly imprisoned. Through the offices of Mian Mir and Wazir Khan, Governor of Punjab; Jahangir was convinced to release Guru Ji. Jahangir sent Wazir Khan to Gwalior to personally deliver the message of release. Guru Ji arrival in Amritsar upon release was celebrated as “Bandhi Chor Diwas”.

In Lahore, Qazi Rustam Khan of Mozang, had abducted a young girl named Kamala from her parents and was raising her as a slave, including giving her Islamic education. She was sent to Mian Mir for higher education. There she had learnt few verses of Gurbani and she used to recite those daily. During plague time in Lahore Guru Hargobind, came with his Sikhs to take care of patients with their own hands. She praised the work of Sikhs and the Guru in midst of her family setting. This incensed Rustam who called her infidel for praising Sikhs. Qazi Rustam in consultation with other Qazis issued an edict (Fatwa) for the execution of Kaulan (Punjabi word for Kamla). Rustam’s wife informed Mian Mir of the edict. Mian Mir suggested to her to seek protection of Guru Hargobind. Hearing the suggestion Kaulan sent a letter to Guru Ji who was nearby, still in Lahore. Guru Ji made immediate plans to rescue her from her living hell. He instructed the maid to let Kaulan Ji know that he would come near the house, but she must escape the house herself and wait for Him outside. Once she had left the house of her own free-will it was then be the Guru's job to protect her always. As Guru Ji approached her house on his horse Mata Kaulan Ji was waiting. She had climbed out of the top window with the help of the maid servant. Guru Ji brought her back to Amritsar in 1626 and got her nursed back to health. Guru Ji had a separate accommodation built for her there. She used to spend all her time in meditation and study. Soon the devotion of the Guru's new charge, earned the respect of the Guru's Sikhs, who took to calling her Mata Kaulan. To immortalize the memory of Mata Kaulan's resolve to remain firm on her words, the Guru constructed a pool named Kaulsar in 1627 A.D. Bibi Kaulan died at Kartarpur in 1630 A.D. There is Mozang Gurudwara in Lahore in her memory where she had spent time before her rescue to Amritsar. 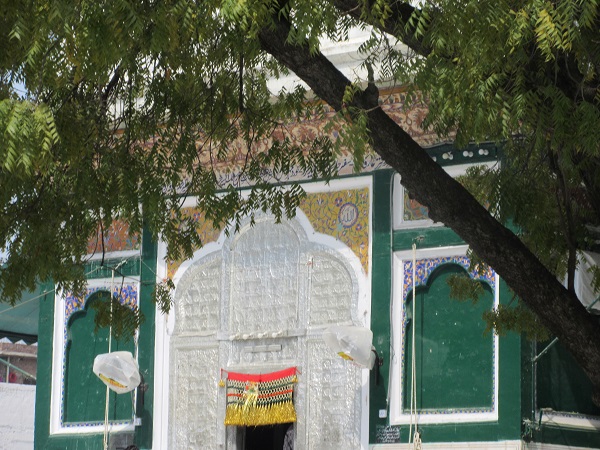 Mian Mir breathed his last in his cell in Anarkali, Lahore in 1635 CE at the ripe age of 85. He was buried at place known as Hashimpur, Lahore which is now known as ‘Darbar Mian Mir’ in Lahore Cantt. Guru Hargobind visited Lahore and participated in his funeral rites. Sir Muhammad Iqbal in his book Asrar-e-Khudi said about Mian Mir; “His shrine is the wealth of faith for the soil of our city Lahore and a luminous torch of the light of right guidance for us.”