PLCS: The Psychology of Class/Race,

Progressive Literary & Cultural Society, India organized an online Anti-War Poetry Reading Event via Google Meet, on 05 March 2022. The event commenced with Moderator, Dr. Rohini Arya (Chhattisgarh). She introduced the topic and said that, “as the title itself says that Dalit literature is the literature written by dalit about their lives. Dalit writers seems to be in quest of human dignity. It represents the collective consciousness of social, political, economic and racial discrimination suffered by the Dalits for thousands of years. Dalits writing is a post-independence phenomena in Indian literature. The emergence of Dalit literature has a great historical significance. Dalits were always on the marginalized side of Indian society. She then introduced the Speaker, Dr. Qudsi Rizvi (Assistant Professor, MANNU, Hyderabad).

In his lecture, Dr. Qudsi critically tried to explain the psychology of the oppressed and the oppressors and the internalization of inferiority and superiority as offered within the short story ‘The Parable of a Lost Daughter’ by M.M. Vinodini. How marginalized communities are labeled as disabled and inferior and this is hammered upon their consciousness deeply. In his lecture he aimed to engage in the reading of the class/race consciousness that the marginalized sections develop through the process of enslavement. The alleged superior masters shape the identity of the inferior subjects and frame rules of living for these ‘wretched of the earth’ whereas the poor, inferior and lower castes idolize the upper caste and follow them blindly. In this process they get ‘lost’ in the labyrinth of degenerative oppressive structures. He threw light on the oppression against women as they are doubly marginalized and sexually objectified which is an extension of the oppressive class/race psychology. It will be critiqued as to how Dalit consciousness emerges when mental shackles are thrown away and hierarchical power binaries are exposed.

After the lecture, in the question-answer session, Dr. Shamenaz, Dr. Shaista Maseeh and Dr. Jeetendra Yadav discussed various queries with Dr. Qudsi Rizvi. After this, Dr. Rohini invited the Chairperson of the Conference, Dr. Neerja Sachdev (S. S. Khanna Girls’ Degree College, Prayagraj). In her analysis Dr. Neerja Sachdev praised Dr. Qudsi Rizvi’s deliberation to be enlightening and illuminating. She praised his talk about the psychology of the oppressed and the oppressors and the internalization of inferiority and superiority as offered within this short story by M.M. Vinodini, a Dalit feminist writer. She said that, “he elaborated on the class/race consciousness that the marginalized sections develop through the process of enslavement. He highlighted that the women are doubly marginalized, exploited and sexually objectified as depicted through the characters, Swarthavani, Subramaniyam and Gayatri’s brother-in-law in the story. Feminist concerns take on a totally different color in the Dalit context. Marginalized people have a life of their own and its literature at once becomes an expression of social reality. It is true that education alone does not help a person to achieve an identity and emancipation from poverty and backwardness.

In the end, Dr. Rohini proposed a vote of thanks and Dr. Shamenaz wished everybody a Happy Ramzan, Navratri, Gudi Padwa, Ugadi and Chheti Chand. The event was graced by scholars and students from all over India. 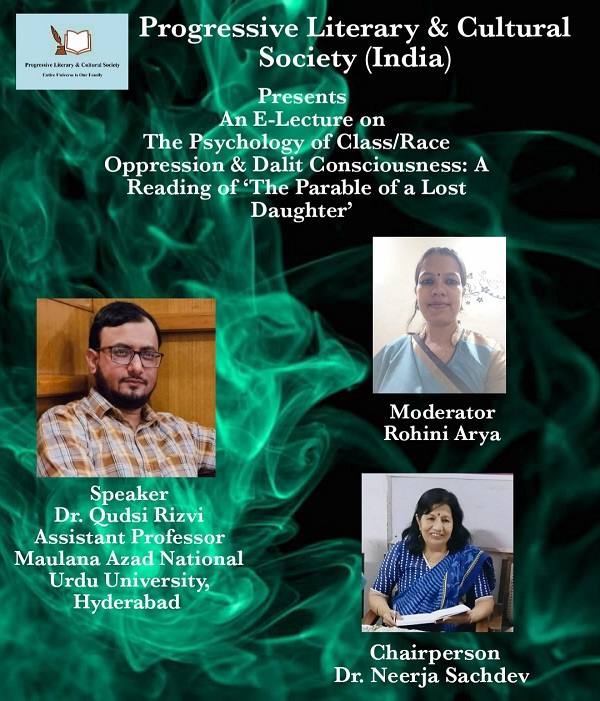