God Particle and Other Poems 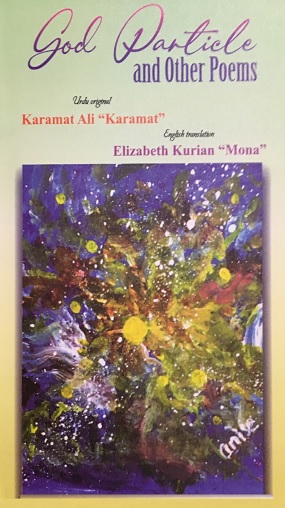 The closeness to God involving spiritual quality could be observed through the simple verses. These verses speak the natural truth about the existing force that binds everyone with a common chord. The chord of ‘eternity, power and wisdom.’

God, the creator, and the omnipotent stands unravelled with His mysteries through Karamat Ali Karamat’s poems.

Karamat Ali “Karamat” is an eminent poet known for transferring his wisdom and intelligence into the Urdu language over the years. “As a poet, he has realized that poetry can have no rigorous logic since our heart obeys no logic and sooner or later every post discovers that these events, the world seems to lack all logic. The poet then aspires to give us more of intuited ‘concrete feeling’ and deeply structured expressions for in a poet’s hand, all abstractions move towards the concrete,” observes ‘Padma Vibhushan’ recipient Sitakant Mahapatra, Poet and Critic (Blurb).

The star in the galaxy of Urdu poets – that is Karamat Ali – is made to shine even brighter thanks to the English translation by Elizabeth Kurian Mona. “Born and brought up in Hyderabad,”“Ms. Elizabeth Kurian ‘Mona’ is a multilingual writer” with “fourteen books of poetry and translation… She excels as a translator. She is a poet in Urdu and English, hence her translations have the scent of native creation,” compliments Prof. Prafulla Kumar Mohanty, Poet and Critic (Blurb).

The beauty of the aphoristic couplets would have not reached me, had this enthusiastic reader not been asked to review this book. The person who asked me to review it is Atreya Sarma U, who has penned one of the three forewords to the book and whose service the translator Elizabeth Kurian has acknowledged: “Mr. Atreya Sarma has also been kind enough to meticulously go through the text and format the same” (25).

Atreya Sarma in his foreword pours his sincere and humble veneration on the poet: “…his God-fearing nature and spiritual outlook makes him a soul of sang-froid. Dr. Karamat’s poems have variety with a common thread of universal, spiritual and natural harmony.”

Atreya Sarma further acknowledges the bonhomie between him and Karamat Ali:

Though a Brahmin is a persona non grata for the narrator in the poem “A Dalit’s Voice” who asserts ‘A Brahmin has no importance in my view,’ it hasn’t come in the way of the eclectic Dr. Karamat Ali Karamat to seek the foreword from a writer who happens to be a Brahmin. Incidentally, the literary friendship between Dr. Karamat and Atreya Sarma had its seed eight years ago when the latter reviewed the book Selected Poems of Karamat Ali Karamat (Translated from Urdu by: Jayant Mahapatra & Others) for The Hans India daily on 09 June 2013) (pp 19-20).

Life’s richness can in no ways be run after wealth and power, gold and silver, enormity and malignity. It can merely be discovered in the pristine thoughts carrying ever-smiling and passionate indulgence. In the process, when the reader examines the poet’s thoughts, the awful senses seem grappling with a mystic mind and a world of reality.

Soaked in the juice of stories, Karamat Ali’s poems address freshness to the soul. Almost each subject in the poetry collection is paid great attention adding essence and uplifting the spirit of human power. Karamat Ali Karamat’s ‘God Particle and Other Poems’ is filled with transcendental secrets coming out of his compendium of reflections.

In the world of clouding challenges, humans ought to preoccupy themselves with their personal interests. The decoding of the cosmos and the interpretation of the way of the world are a rich and fragrant bequest to the ignorant.

The many subjects introduced are abounding with in the book have an aura of peace and harmony of nature. The poems – Entreaty; Departure; The last wish’ The last kiss; White ants; God Particle; A Dalit’s voice; Pathway of life; Religion of the poor; Homelessness; Devadasi; To Saaqi, the wine bearer; and Rubaiyat –resonate with a universal appeal.

The simple Dalit tribal dwelling in the deepest hills enjoys negotiating the valleys, treats himself with green herbs, and manages the cold months by burning the wood and remaining awake at night. This rustic is humble and childlike but when he is angry, he doesn’t hesitate to cut off his enemy’s head and then surrender to the police.

I am from the hilly tribes of Odisha.
My skin is black, but my heart is clean.
My hut is surrounded by forests and hills.
I dwell in the lap of Nature.
I climb down many kilometres to reach the valley.
My work is collecting wood, tamarind and honey... …
I spend the cold months by burning wood,
Remaining awake at night. (p 57)

“The rituals of our weddings too are different,” he says, and adds:

The importance of truthfulness and honesty is beautifully stressed in many a poem.

The poet Karamat Ali “Karamat” expresses his genuine love for humanity producing a vibrant effect on the hearts of the readers. In the poems ‘Talking to my other self’ and ‘God Particle,’ he crosses the peaks of Himalayas, like the flocks of birds that fly from Siberia to the Chilka Lake, not physically but in an introspective address to his other self, that is “thou” vis-à-vis “I”.

My “I” is light and radiant
But your “thou” is a deep ocean
The depths of which are filled with darkness.
Even then there are numerous stones
And coral reefs, many dolphins, sharks, and crabs.
How many types of shells and snakes!
There are many silver and golden fishes too
Whose beautiful, attractive and pleasant world
Is different, but hey become food for sharks. (pp 50-51)

In his ‘Entreaty,’ the soul empathizes with the envious nature of man where he forbids what comes as good to the other beings and never hesitates to dominate over them. As for a Momin, the words below, bring out a sanctimonious observation.

Immerse yourself in the ocean of the wine of love
So that your intellect feels harmonious
On the shore of existence. (p 67)

No matter what, the culprits of distortion and disbelief ensnare and blindfold the thoughts of those who are not fortunate enough to have a peep into the mighty wisdom.

The poet is still so attached to his late mother that he can never forget the happiness of her last kiss.

This last kiss brings fresh pain and makes me restless
In the heart where other memories too are kept afresh.
I still yearn for that kiss. (48)

In the current generation, many of the people are wasting their time on stupid misadventures with no value for self, identity and humanity.

The radiance dwelling in the garden and the jungles stands rediscovered in the book ‘God particle and other poems.’

Seemingly with the elegance and content bestowed in soul transcend the even image forming colours in the vast spectrum. While deciphering stupidity to organic purity, it seals down the lips of a hypocrite by bringing ephemeral concept of the world and its innate order of possession.

Every other rendered idea is presented in a rather mild approach to bring-in consciousness of the Creator and His creation. Their rich philosophical concepts capture the attention of the reader under the pseudonym of love.

Karamat Ali Karamat himself as a candle lightens the hearts. He speaks clearly and candidly dreading the high priests of literature as an artist. He acquaints us with a glimpse of the higher world in a lucid way. Whether it is the beggar or the monarch, the colours or the darkness, the courtesan (Devadasi) or the respectable woman, each of them are treated with a sane and empathic mind.

The employed themes are realistic in nature and simple to comprehend the form of living and death. Karamat Ali’s powerful verses attempt to shake away the doubts of atheists with the bitter-sweet reality of about existence and human bounds, in a genuine perspective.

The translation by Elizabeth Kurian Mona is effective and appealing.

The book-cover captures the image of stars shining in a galaxy conveying a pleasant note.

In short, the book attempts to empower the self, singing glory to the eternal power.