Lion of the Skies 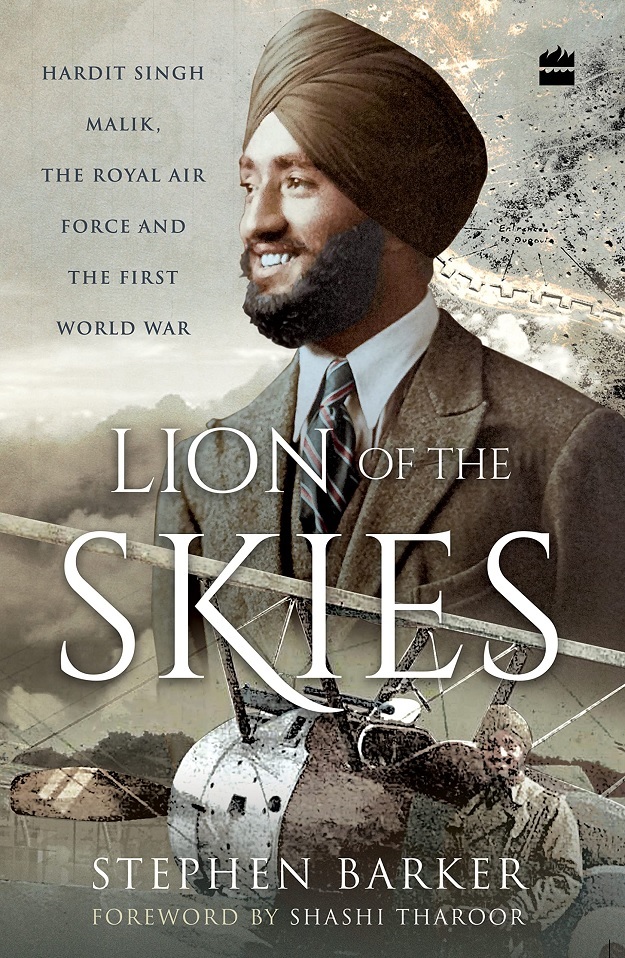 When I first read news about the book on Hardit Singh Malik by Stephen Barker, my first thoughts were – well this would not have happened in those days of first world war, for a Britisher, to write about a subject from the colony. The world has changed in last century, but still for Barker to venture a book on Hardit, after the protagonist had published his own autobiography, only a decade earlier, makes it an even more challenging task. Barker has answered the question in his Introduction by saying that it was “to explore further small details described by Hardit”.

This was the time when the new flying machines were going to be a part of war efforts for the first time. As these flying birds were still in their infancy, their designs were far from refined, materials used to make them were commonly available materials in those days as wood, canvas, with braces, and wires for reinforcement. The pilots wore leather helmets, big goggles for wind protection as the wind shields were open. The pilots essentially came from upper class Europeans. Hardit was a pioneer in that sense gaining entrance to an exclusive club and work “to the challenges of being an Indian serving amongst Europeans”.

The first Chapter titled Rawalpindi starts with the birth of Hardit in the small hours of 23 November 1894. In Hardit’s home emphasis was placed on religious devotion and prayer. He arrived in England from Rawalpindi, India in 1909 where he met his older brother Teja Singh, who was studying civil engineering. He passed the entrance examination to Clifton College and enrolled there for Spring term in April 1910. Later he moved to Oxford in 1912 and graduated from there. Then he moved on to London to study law. During that period the First World War broke out, like all young men of that time including Hardit wanted to enlist. Coming from a Sikh family with strong martial traditions his yearning was palpable to be “tested in the forge of modern warfare”. He had written in his letter to his family; “Besides, we Sikhs have a great fighting tradition, and we should not make too much fuss about death.”

As luck would have it, Britishers were not keen to allow “aliens” like himself to be admitted to their forces as officers, even when qualified he was thwarted in his first attempt. The only entry open for him was to be inducted as mere “other ranks” which would entail him working as support member, truly demeaning.

With doors closed and his yearning strong to join the war, Hardit in the summer of 1916, got a chance to go near the battlefields in France as a driver of an ambulance for the Croix Rouge Francoise. His job assignment entailed picking the wounded from the battlefields, and ferrying nurses to and from the hospitals. Here in Cognac, he was first smitten by the idea of becoming a fighter pilot. He was particularly inspired by the great French hero and fighter pilot, Georges Guynemer who was his country’s second highest scoring fighter ace with 53 victories. He made enquiries for enlisting in French Air Force.

By the end of 1916, as a result drastic need of recruits there was a change in the policy, and a small number of Indian military pilots did take part in the air war as officers of the RFC (Royal Flying Corps) and later the RAF (Royal Air Force). Hardit with a recommendation from the Dean Urquhart at Oxford to a former head of RFC was finally able to enroll as an officer in RFC on 28 March 1917. The racial discrimination still prevailed, as he was given a position of Honorary 2nd Lieutenant, without pay, nor authority to command over British personnel. He was trained as a pilot in Aldershot, Hampshire. As an observant Sikh, he wore a turban instead of a helmet, and later wore a specially designed flying helmet that fitted over his turban. As a result of his unusual helmet, he was nicknamed the “Flying Hobgoblin”.

Hardit was with 28 Squadron of RFC, flying single-seat biplane fighter aircraft called Sopwith Camel that was introduced on the Western Front in 1917. Hardit’s first flight over the German lines in action occurred on 18 October.

“The aim of this combined sortie with 32 Squadron was to patrol the front lines, with the Camels protecting the slow and clumsy R.E.8 planes carrying out their primary role of spotting for the artillery on the ground, in preparation for the next major assault in the salient. Between 1000 and 1100 hours that morning, Hardit fired off several long-range bursts at enemy aircraft to no avail, knowing that the only way to make a kill was to get up close, yet coming into contact with the enemy for the first time relieved the tension somewhat.”

Next day, 19 October they were up in the air again, despite very poor visibility.

“The aim of the operation was to make a combined attack against the important German aerodrome at Rumbeke, close to Roulers. Rumbeke was the home of Jasta 2, the German squadron named after its now posthumous commander Oswald Boelcke.”

Hardit’s task with 28 Squadron was to sweep around as far to the east as possible and surprise those Germans sent up to engage the bombers. There were over fifty aircrafts on the mission, looking for Germans. Soon they engaged a small party of Germans, taking them by surprise. There were bullets flying in all directions. Shooting ensued which created quite a confusion as the planes from opposite sides got mixed up. Hardit was on the tail of an enemy, who instead of turning back to engage kept on diving.

“He must have been as frightened as I was! I must have started shooting from too great a distance, for at first nothing seemed to happen. But suddenly I hit him and first his plane started to smoke, and then went down spinning in flames……….As Hardit followed down his falling victim, he could see the black smoke issuing from the burning buildings in the distance, but he had other more pressing considerations to attend to. He had dropped too low and needed to climb quickly if he wasn’t to share the same fate. There was nothing more vulnerable than a machine close to the ground from an attack from above and his Camel was also isolated. Fortunately, Barker had spotted his predicament and brought C Flight down to his aid. The six of them climbed back to a safer altitude and headed for Droglandt.”

“On the way back, he encountered some desultory antiaircraft fire from the German positions below. He thought nothing of this until he began his landing procedure at 1235 hours, an hour and twenty-five minutes after taking off.”

As he dived straight to ground his plane broke into three pieces. Strapped to the seat he was unable to get out, engine fitters helped him out. Nevertheless, having recovered his composure, Hardit joined the others in the officers’ mess, where there was an air of celebration. Everyone had returned from the mission unscathed and the wiser for the experience, and the squadron’s contribution was judged to be a great success by the high command.

His marriage took place on 13 April 1919 in Rawalpindi. He returned back to England on ship Dufferin with his bride. RFC was now part of RAF and he officially left it on 16 August 1919. They returned back to India at the end of 1921. The last Chapter in the book is Conclusion which does not cover the later part of his life of being Independent India’s first high commissioner to Canada in 1949. He was also Indian ambassador to France to use his goodwill among the French, earned during the World War 1 by working for their red cross and retired after it in 1956. A legendary hero in his own right, Sardar Hardit Singh Malik lived and died with the two German bullets that had wounded him, still in his legs.