My Idea of Education - Literate or Educated? 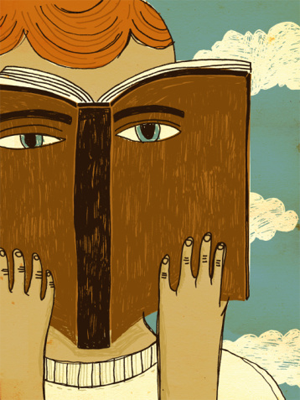 During my interaction as a principal with thousands of parents over the years, I have come across conflicting views of guardians on education and their expectations from the school. While some expect their children to continuously keep getting A without bothering about other aspects, there are others who clearly state that they are not worried about the academic performance of their progeny so long as they are happy in school. Some have insisted on the school setting back-breaking homework whereas others have objected vehemently on assigning any work to be done at home. I have experienced the pendulum swing so widely that it becomes virtually impossible to reconcile the two extreme positions.

While a majority have felt that their children should learn good moral values, some have argued that their offspring will not be able to get along smoothly in life if they fully stuck to honest and ethical means. They have further stressed the point that these ideas look good in books and articles but are not meant for practical life. In support of their contention they have given examples of rich and ‘successful’ people saying that they have all attained these ‘visibly’ high positions only through corrupt and devious means. Some have even quoted instances from the Ramayana and the Mahabharata where our mythical heroes have purportedly employed dubious means to achieve their ends. Hence, some parents are not too keen on emphasizing the inculcation of such values in their wards.

During my Principalship of many years I have met highly qualified people who have been utter failures in their lives because of their lopsided personalities while many illiterate persons have been eminently successful. Jesus and Kabir were not literate but the legacy they have left behind endures till date. Although Akbar the Great, the third Emperor of the Mughals was illiterate, he was able to establish a vast empire and was the most successful ruler of the Mughals. Apart from establishing a large collection of literary works, he promoted poetry, art and other finer aspects of life. He commissioned a number of splendid buildings during his regime. He was eminently successful in promoting religious harmony. To me he was an educated person in the true sense. I once had to sack a double gold medalist teacher within three days of his appointment in the school as he behaved like a ‘mad’ man. And it is not a stand alone case: many a time toppers have ended up as floppers!

I wonder then what distinguishes human beings from each other. What makes some of them behave irrationally?

We often misuse the word ‘education’ to mean literacy. In our present day society some even equate fluency in spoken English with being well-educated. A mother once mentioned to me that her daughter would become a ‘Bhenji’ as she was mingling with a girl from not so sophisticated a family even though she was well-behaved with good ‘sanskars’. This belief was so strongly embedded in her that she withdrew her daughter from the school I was heading, then. What a distorted view of education! It is, however, heartening that with democratization and opening of avenues for all categories of society, the situation is changing now. Selection in all sorts of sports teams or top national cultural events or positions in IT sector, all seem to have a far more egalitarian base. There are opportunities for the talented, bright and hard working persons to excel and climb the social ladder.

Education encompasses all aspects of life. It is such a vast and all-inclusive field that it becomes practically impossible to encapsulate its definition in a few paragraphs, let alone in a few bullet points. It can easily be compared to a pie stuffed with different fruits. You can have a bite from anywhere, it will be sweet but taste differently at different places. So with education. Thinkers, eminent educationists, other scholars and political leaders have given their opinion but none is comprehensive enough to include every aspect of education. Therefore, I think it appropriate to represent a few of them here to get a good idea of its dimensions.

Our present society mainly recognizes and rewards only academic achievement which in turn is based on collecting information without understanding its meaning and value. There is no emphasis on processing or drawing inferences from the information so acquired. In such a scenario the typical student is challenged for bookish information but motivationally starved. Knowledge per se is of no use: it is like a dictionary where words have no value but what matters is how we string them together to make it meaningful. Similarly, if the information is not processed properly or utilised in drawing conclusion, it will remain inside us to rot like undigested food. In the present system of education the measuring tool is the written test. Those who don’t have the ability to put their thoughts on paper are labelled as failures. And according to this testing criterion other skills do not count. We should remember the fact that whatever is exercised grows stronger and whatever is ignored stays dormant. Therefore, by and large, in today’s India, other qualities of people are being left in the closet.

Henry Ford, Thomas Edison and many more super-achievers never finished their schooling. The secret of success of such people and many self-made millionaires is vision, research, application of intuitive knowledge and processing of collected information for a chosen project and finally finding a workable solution. They did not depend on pre-stored knowledge as our present education system emphasizes. This system does not allow the genius of such persons to bloom.

The existing system of education encourages students to pass an exam where stereotype questions are set and standard answers are expected. This encourages memorization without motivating or inspiring the learner. Learning by rote turns off the desire to learn. The pitiable condition of a learner in India is beautifully captured in the following poem composed by a student.

“We read, we write, we calculate
Got no choice but to participate,
Of heroes we learn old and new.
Some inspire us in many ways, some one or two.
Do I follow my dream or do I follow the crowd?
Do I follow with silent patience, or speak out loud?
Do I laugh or do I cry?
Do I walk or should I fly?
Do I stand out and ask them why?
Or should I just shut up and comply?”

The aim of education should be to develop a life-long love for learning. To achieve this we will have to stop the assembly-line mass production as our schools do, casting everybody in the same mould. G.B. Shaw resented it and expressed his anguish thus, “the only time my education was interrupted was when I was in school.” Quality education should be custom-designed that addresses the unique abilities of individuals and provides a positive emotional experience. The real goal of education is not necessarily the mastery of the subject matter, but mastery of one’s person. The methodology of teaching the courses these days tends to induce passivity. It is a matter of common observation that children come to school with spontaneity, insatiable curiosity and imagination. These diminish as they proceed through their classes. In fact actual learning takes place when the learner is active and fully involved. Therefore, lessons should involve activities that are intended to stimulate thinking or promote experiential learning. If a car driving school instructor were to first give theory lessons on the working of the engine, the battery, the axle, the body of the vehicle, the learner would never be able to drive the car. But, in actual fact it takes only 3-4 days for a person to be able to drive as he does it practically. ‘Minds on’ is not sufficient: with ‘Hands on’ one learns faster.

We are not able to plug directly into another person’s brain: we can never educate directly, but certainly we can encourage learning indirectly by means of creating a conducive environment. Teaching which induces a slave mentality or a sense of impotency is not education at all—it is an attack on the minds of human beings. Mark Twain said, “My mother wanted me to have fine education: so she got me kicked out of school”. Education should aim at empowering and definitely not on enslaving.  Many years ago on my visit to Frankfurt I happened to see a steel sculpture of a man with a hammer in his hand which in turn was moving continuously from head to heart and back. I am not sure what the sculptor had thought when he made it but the idea immediately came to my mind that education should aim at training the head, the heart and the hand (3Hs) – intellectual development, compassion and concern for others and learning by doing. Genuine under¬standing comes from hands-on experience. The hammer also reinforces the dignity of labour – that no work is mean if done in the right spirit. In my opinion if education has to provide a solid bedrock for us to lead fulfilling lives the following qualities must take firm roots in us through it.