At Chitrakoot, Rama, Laxmana, and Sita passed their time in prayers, repetition of Lord's name - japa, Yoga and meditation. Laxmana used to collect food items for morning and evening meals. Rama and Sita used to collect fresh flowers for preparing beautiful bouquets and garlands. The hut used to be decorated with these flowers, and at times Sita would be pleased to adore a flower or two in her long and beautiful hairdo.

Sita used to cook the food which consisted of roots, vegetables and milk preparations. In the evening supper consisted of fruits and milk alone. Thus they lived a very simple and peaceful life. Everyone was very happy. Thoughts of dissatisfaction, inconvenience, and longing for palace life never entered their mind anytime.

Many sages and Rishis, engaged in various spiritual practices and austerities, came to Rama for his advice in seeking God. Discussion went on the subjects like devotion - Bhakti, Karma -action, knowledge -Jnana, and meditation etc. Study of Holy Scriptures and Books was added pleasure when Rama used to enlighten them about the nuances and subtleties of the philosophical arguments therein.

Peace and tranquility descended on the land. Nature was equally hospitable to them with plenty of clean and fresh springs, healthy crop, fresh vegetables and fruits. It is believed that for more than twelve years the holy trio lived at Chitrakoot. Later they decided to move southward where the demons were creating lots of difficulties for the common folk to live peacefully. These Rakshasas (demons) used to beat up the sincere spiritual aspirants - sadhus and sanyasins - and used to obstruct their religious rituals. The purpose of Rama to incarnate on the earth was to destroy these selfish and wicked demons and free the land of evil tendencies so that righteous rule of truth, simplicity, love, and worship of God were reestablished again on the earth.

The party thus moved to the forest of Dandakaranya in central India. The place is known as Panchavati near present day Nasik. Two huts known as parnakutis were erected for Rama-Sita and Laxmana respectively. On their way to Panchavati Rama met sage Atri and Agasthi and discussed certain aspects of devotion and karma theory.

One day Rama and Laxmana were sitting a distance apart near their forest dwelling. As it happened Shurpankha, sister of Ravana, was passing from there. She was ugly looking widow, but was ambitious and powerful because of protection assured by her brother, the mighty King of Lanka, Ravana. She fell in love with Rama at first sight! 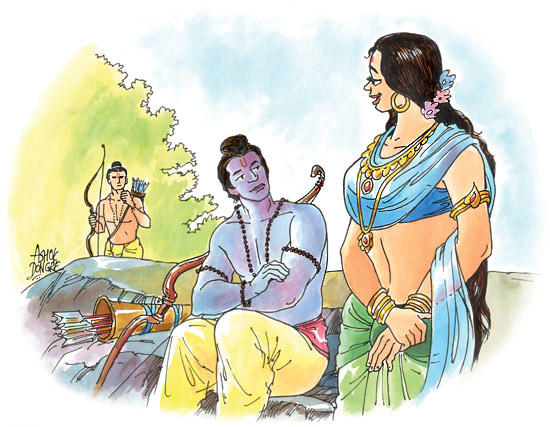 With her maya power she changed herself in a very beautiful maiden and approached Rama with a lady-in-love like gestures. As she came near, Rama inquired, "O lady, who are you, what can I do for you?" Shurpankha replied, "O handsome, I have fallen in love with you. I am also beautiful, therefore, please marry me."

In those days polygamy was not unusual in common people, and hence such requests were natural. But Rama never dreamt of any other woman as his wife other than Sita. He had vowed to monogamy. Moreover he could very easily see through the plan of Shurpankha. It did not take him more than a second to know the real nature of the beautiful woman in front of him. But he also decided to play some joke on her. Therefore Rama said, "O lady, I am sorry I cannot marry you. I am already wedded to one wife Sita. But my younger brother, Laxmana who is sitting there is still unmarried and he may be pleased to marry you. Why don't you approach him!"

Shurpankha agreed and went to Laxmana with similar request to accept her as his bride. Laxmana also was in a jolly mood. He told her to go again to Rama because at present he did not have any plans to marry. Thus three or four times Shurpankha was shuttled between the two brothers. At last her patience gave way and she came to her original form and threatened to kill Rama and Laxmana. At this folly of her, Laxmana was irritated and as a result cut her nose and ears with the arrow. Bleeding and in rage, she fled to her one of the brothers, in nearby forest. The demon, brother of Ravana and equally powerful as Ravana, marched with huge army to put an end to the tormentors of his sister. A great fight broke out and ultimately the demons were defeated.

Seeing the end of his brother, Shurpankha rushed to her second brother Ravana and narrated the whole story. Ravana was puzzled. He could not understand that a single sanyasin like person could defeat his brother and his army. He thought over the matter and came to the conclusion that Rama must be God incarnate and nobody else. But he promised his sister that he would take revenge of her insult.