Ravana was the king of Lanka. His prosperity could be judged by the fact that his Lanka – capital city – was built in gold. Everyone had enough of food and shelter. Except for his brother Vibhishana, and to some extent his (Ravana's) wife Mandodari, rest of the people in his kingdom followed Ravana's path of material enjoyment as the goal in life. He had a huge army to defend his kingdom which was rarely threatened and nobody even imagined in dream that it would be. Moreover, the location of his capital was such that outsiders could not venture to reach there, as a sprawling sea separated it from the far off land.

Ravana was the mightiest king on the earth at his time. He was very learned and accomplished person. He was great devotee of Lord Shiva, and had obtained the boon that he would not be killed by anyone other than the Lord Himself! He was well versed in Vedas, and other scriptures. He used to worship Lord Shiva daily. His bravery, courage, and expertise in use of all types of instruments of war like bow and arrow, mace, sword, so on was acknowledged by everyone.

Moreover, he was gifted with special supernatural powers known as Mayawi-Shakti. With its help he could fly in the air, become invisible, could throw rain, fire, or thousands of arrows in a war encounter. He had many other powers granted to him by Brahma God as well. Then, still, why call him wicked or evil? This was because he was selfish! He was interested in using all these powers for himself only, and that too to gratify his senses alone. He did not believe that all spiritual disciplines and worship are meant to seek refuge at the Holy Feet of his Chosen Ideal, but wanted to make use of all such powers to rule over the world as unconquerable King.

Thus he was full of lust, pride, anger, covetousness, infatuation, hatred, and jealousy. These tendencies, according to our scriptures, cause downfall of a man and hence such persons are called Demons. They are engrossed in a life style where they are blind to the values of compassion, kindness, and service. They practice unrighteousness, and do not allow the devotees or sadhakas to pursue their spiritual practices to seek God (or Self or Truth, or Atman or Brahman). Religion takes a downhill course.

And hence God incarnates to destroy them to establish means and ways of righteousness - Rama as Avatara. 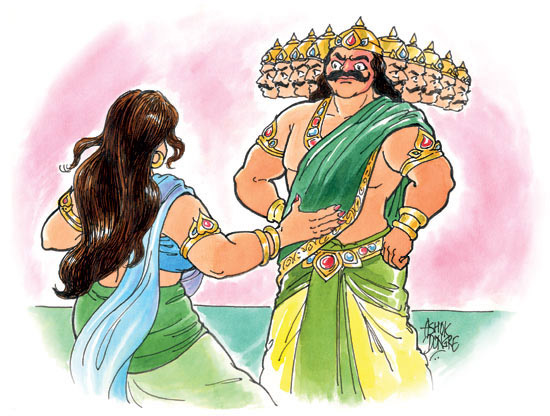 As Shurpanakha, his sister, narrated the insulting treatment meted out to her by the two brothers Rama and Laxmana, the anger rose high in the heart and head of Ravana. Fuel was added to fire when Ravana heard that Sita, wife of Rama, laughed at the cutting of the ears and nose of his sister. He decided to avenge this insult. Pacifying her sister, he decided to reach the Dandakaranya to kidnap Sita as a way of revenge! Ravana Plans Abduction of Sita.

The Story of Golden Deer

Ravana made all the arrangements to start for his mission. Meanwhile, his minister, Marich, offered his help to accomplish his mission. Near the Panchavati, Marich changed himself in the form of a beautiful golden deer! Jumping here and there, it caught sight of Sita. Rama and Laxmana were also present in the hut. Pleadingly, Sita said, "O honorable Rama, look what a wonderful golden deer is roaming around our hut. I am very much desirous of having his skin for my use. Will you not bring it for me?"

Rama tried to dissuade her from such disturbing thought, but Sita did not desist. She insisted to have the skin of golden deer. Ultimately Rama acceded to her request. Calling attention of brother Laxmana, Rama said, "O brother, I am going after the deer to fetch its skin. Be vigilant and protect Sita in case of any difficulty or predicament. I do not know why I have this premonition of calamity befalling us."

Laxmana promised to look after Sita. As soon as the deer - demon Marich - got the hint of Rama coming after him, he fled with the speed unheard of. It went far away. Rama ran after the deer in great speed but could not shoot his arrow as the distance between the two was always great. At last Rama shot his arrow which mortally wounded the deer. On falling to the ground, deer Marich shouted, mimicking the voice of Rama,

"O brother Laxmana, rush to help me, I am wounded." This he repeated thrice in a very loud voice that would reach the ears of Sita and Laxmana. On hearing the cry of her husband, Sita asked Laxmana to rush to help Rama.