Rama and Laxmana left the ashrama of Shabari and reached the Pampa Lake further South. It was a pleasant site; the water of the lake was sweet and clear. All animals were seen drinking from the same spot. Rivalry and cruelty was foreign to the spot. Surrounding trees were blooming with fruits and flowers.

Here the two brothers rested for a couple of days. The evergreen sage Narada visited Rama to seek advice on the nuances and subtleties of Bhakti -Yoga of Devotion or Worship. The expressions of Bhakti in a spiritual aspirant were discussed. Rama told Narada about the nine types of Bhakti:

Meeting of Rama and Hanuman 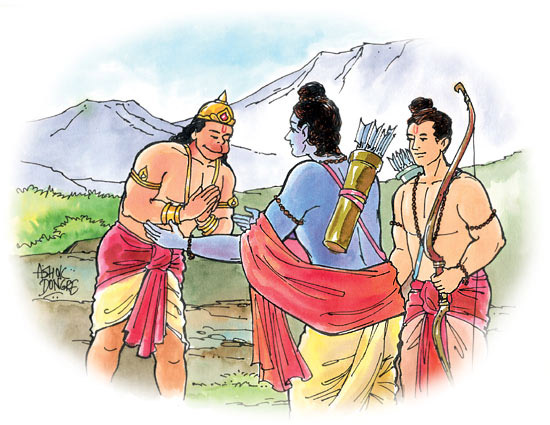 Soon Rama and Laxmana reached the foothills of Rishyamuk mountains. Here the king Sugreeva of monkey clan was staying with his ministers and friends. One of them was mighty Hanuman, the noblest devotee of Rama. This intelligent monkey was well versed in all the scriptures and was pure by thought, words, and deeds. He had vowed to remain celibate all throughout his life, and therefore he looked at every woman as mother. His devotion to Rama was eternal, and he thought himself to be the most obedient servant of Rama! This sadhana with servant attitude is called as Dasya-bhava. Hanuman is worshipped all over in India as the deity of purity, power, and eliminator of all evils.

On seeing the two foreigners coming to the mountain, Sugreeva asked Hanuman to see with what intentions these two had come to Kishkindha. Accordingly, Hanuman came down as a Brahmin priest, and inquired, "O noble ones, who are you and what brings you here? It seems you are warriors but you have taken to life of sanyasins. Why is it so? O delicate ones of royal origin, your feet are having blisters due to this rough terrain. Please tell me about yourselves."

Thus spoken to with modesty and humility, Rama answered, "O Noble Monkey, we are the princes from Ayodhya. My name is Rama and he is my brother Laxmana. As it happens, some demon has kidnapped my wife Sita and we are moving in search of her. And by the way who are you, who speaks to us with such devotion and love?"

No sooner did Rama speak thus than Hanuman realized that he was face to face with his Ishta - Lord Rama. The amnesia of this birth suddenly vanished and Hanuman could see the glorious form of his Master full of effulgence and grace.

With tears in his eyes, he prostrated at the lotus feet of Rama and said, "O Lord, you have taken such a long time to come to your devotee that this Hanuman has almost become ignorant fool not to recognize you. What a foolish question to ask - who are you!"

Rama lifted his devotee and put him to his breast, patting him on his back. The tears flowed freely from the eyes of Rama and Hanuman. Laxmana who was astonished to see the second devotee (first one was Shabari) whom Rama loved more than him (Laxmana). But jealousy! No. Laxmana was an intelligent devotee of Rama, capable to understand that Sri Rama had all types of Devotees who come to earth to contribute their might, and help Rama in his mission. Therefore, he also hugged Hanuman with same love and reverence.