Soon Rama and Laxmana were invited to visit the camp where with the help of Sugreeva and other friends they were sure to find out some way to locate as to where Sita could have been taken away.

Sugreeva had run away from his kingdom in the fear of his elder brother Vali. Vali was very powerful and cruel king of Kishkindha. He had once defeated the mighty Ravana also. As it happened, once a demon Mayawi challenged Vali's supremacy. Vali accepted the challenge and fight broke out between the two. They entered one cave and continued their fight inside. Vali specifically told Sugreeva to remain stationed at the mouth of the cave and wait for him for fifteen days. "I will kill this demon and return", Vali told Sugreeva.

But even after more than fifteen days, nobody returned. one day blood was seen flowing from the cave and Sugreeva thought that Vali must have been killed, and it was likely that the demon would kill him too. So Sugreeva ran away to his kingdom and waited for Vali. But Vali did not return even after a few weeks. Therefore he declared himself to be the new king in place of Vali.

A few months passed thus. The injured Vali recovered from his wounds and regained his strength to return to his kingdom. He was trembling with rage when he found that his unfaithful brother has acceded to his throne. He suspected foul play and thrashed Sugreeva almost to death. Somehow Sugreeva escaped and ran for his life to take shelter on the heights of Risyamuk mountains.

Further Rama was told that Vali had also forcefully taken his (Sugreeva's) wife as the new queen. Sugreeva and Hanuman pleaded that Vali was unjust and cruel king and his rule was causing immense hardship and suffering to the people of Kishkindha. Hence, Rama must put an end to his life and make Sugreeva the king again. 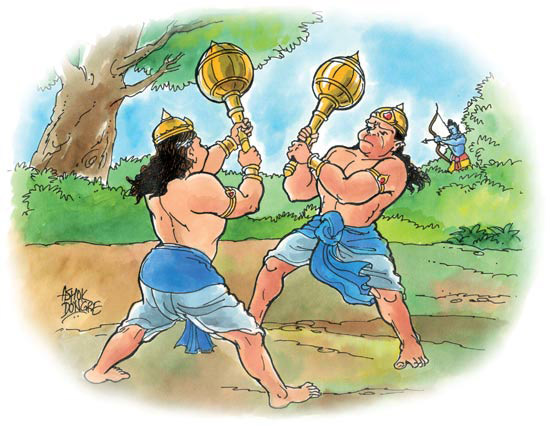 Rama agreed as he had seen that although Sugreeva was a coward fellow he was not wicked. He had not occupied the throne intentionally or through scheme. He really believed that Vali was killed in fight. Therefore, Rama accepted him as his friend and promised to eliminate Vali. Accordingly, The party left for the capital city and Sugreeva, under the instructions of Rama, challenged his brother to come out and fight it out for the final decision as to who should rule Kishkindha. During the fight Rama put an end to the life of mighty Vali with a powerful arrow. Sugreeva thus was reinstated as the king. He promised Rama to help him in finding out the whereabouts of Sita. Accordingly plans were drawn and four groups were formed to reach out East, West, North and South territories.

Son of late Vali - Angad - had joined his uncle and Rama in this mission. He became a great devotee of Rama. Jambuwanta, a bear, also came to help them. Thus Rama, Laxmana, Hanuman, Sugreeva, Angad, and Jambuwanta headed south where chances of finding Sita were highest.