Vibhishana detailed Hanuman about the whereabouts of Sita. He showed the way to Ashokvan where Sita was kept captive. He also warned Hanuman to remain vigilant and cautious as Sita was guarded by police-women loyal to Ravana. Moreover, whole Ashokvan was surrounded by armed guards who would not hesitate to kill any intruder.

Thus forewarned, Hanuman saluted his newly formed friend and left for the garden for his first meeting with Mother Sita. It was easy for Hanuman to jump and climb the trees, to hide himself in the bushes or the leafy branches. He could, in addition, at his will, become very small and thus escape the attention of the guards. At last Hanuman entered the garden. He could see assembly of women around one Aryan lady whom Hanuman immediately recognized as Sita. 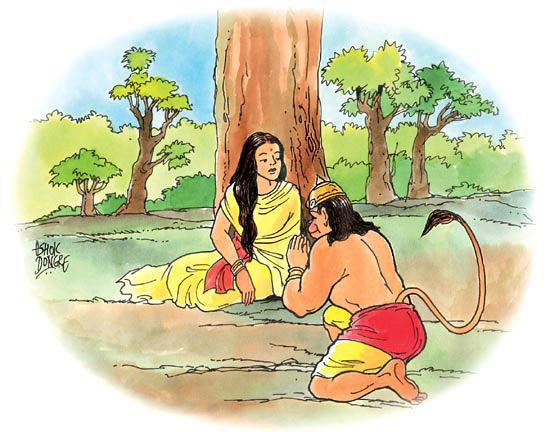 Condition of Sita In Ashokvana

The question vexed Hanuman's mind as to how to present himself before Sita. The problem had two dimensions: (1) Sita was surrounded by many attendants, and (2) Sita might take him to be a demon in form of an impostor monkey! She would refuse to accept him as a friend and devotee of Rama. Hanuman was sure that the second problem would be solved as he had brought the ring from Rama which Sita was sure to recognize as authentic.

Just then Hanuman heard shouts of 'Lankapati Ki Jai Ho - Victory to King Ravana'. Hanuman saw Ravana approaching the garden. Immediately he jumped up the tree under which Sita was seated. He hid himself nicely on one of the branches and decided to observe the proceedings below from there.

Ravana came towards Sita. His wife, Queen Mandodari, and a few other maid servants were accompanying the King. Ravana addressed Sita thus: "O beautiful lady, why do you persistently refuse my proposal of marriage? I will treat you as the first honorable queen of this vast empire. However, if you still think that Rama would come and seek your release, I am afraid, you are sadly mistaken. Nobody ever has dared to attack my kingdom, and if anyone does dare so, he and his army will be destroyed within days."

"Probably you are unaware of my power. Therefore, for the last time, I modestly ask you to become my wife. It would be an honour to you and joy for me." So saying, Ravana gave three day's time for her to finally make her decision. The negative answer would call for Ravana's wrath. The thin and emaciated Sita did not answer. How can she utter a single word when her whole mind and heart was engaged in constant prayer and Japa of Rama!

The scene below aggrieved Hanuman very much. For him Sita was embodiment of purity, simplicity, and tolerance. Impulsively, he wanted to jump and attack Ravana, but better sense prevailed. He knew that it would be counterproductive to act in haste. With heart full of mixed feelings of anger, pity, and helplessness, Hanuman started praying to Rama to give him courage to fulfill his mission of rescuing Sita from the clutches of Ravana.

Just then Mandodari, the queen of Ravana, intervened and told Ravana not to trouble a noble married woman with his hard words and ungainly demands. He told her husband to return Sita to Rama without delay, and with full honor and grace. But Ravana called Mandodari fussy and lacking faith in the prowess of her husband. It was not unusual for a king to have two (or three or more) wives; and secondly Rama had insulted his sister Shurpanakha which required to be avenged.

Hanuman listened to all these arguments but kept quiet. When Ravana left with his troupe, Hanuman decided to present himself before Sita. He silently dropped the ring bearing the name and seal of Rama in the lap of Sita. Surprised, Sita looked up to find a mighty monkey staring at her! But her surprise turned into emotion of joy when she found the ring to be genuine: of her Master Rama.

She therefore, beckoned Hanuman to come down. With folded hands, Hanuman presented himself before Mother Sita, tears pouring down his eyes. His voice was choked with emotion. He described how Rama was also suffering the pangs of separation. He assured Sita that soon Rama would come, conquer Ravana and take her back.

It would be logical here to think that Hanuman should lift Sita and fly across the ocean to reach his friends, and thence to Rama, and the story would have a pleasant end! But, no. Three factors are to be considered here.

It required putting an end to Ravana and his associates, and rewarding Vibhishana for taking side of Truth.