It was decided that Hanuman should return and inform Rama about Sita's captivity so that he would come with his army and seek her release by defeating Ravana. Thus, taking leave of Sita, Hanuman wanted permission of Sita to eat some fruits from the trees around. He was very hungry. Sita permitted Hanuman to satisfy himself. Hanuman uprooted many trees so that he need not jump to pluck the fruits high up. The noise brought many guards to the scene. They tried to arrest this big mischievous monkey which was causing damage to their beautiful garden. But powerful Hanuman overpowered everyone of them and beat them up severely. 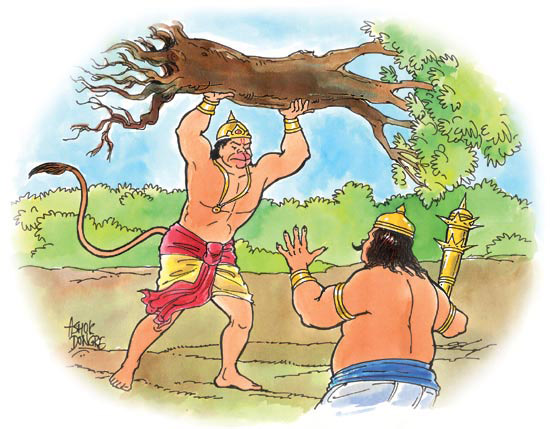 Someone ran to the royal chamber of Ravana and described how 'a monkey was causing havoc in Ashokvan'. Ravana was surprised to listen that an ordinary monkey could single handedly beat up his powerful men! He, therefore, sent his son Indrajeet to arrest the monkey and bring him to the royal court.

As ordered, Indrajeet, the powerful and obedient son of Ravana, reached Ashokvan to find the place in the most chaotic state. The trees were uprooted and the demon guards were running here and there to save their lives. Hanuman was as if making fun of them. Full of anger, Indrajeet challenged Hanuman to fight with him instead of his servants, saying,

"O monkey, you have done a great harm and insult to the kingdom of Ravana. I have come to arrest you and if resisted, I would send you to hell by killing you." Thus saying they both were engaged in fierce fight.

Hanuman wanted to assess the character, strength, and weaknesses of Rama's opponent which would be useful for them to plan their strategy to defeat Ravana. Thus tied and escorted by cruel looking army men, Hanuman was brought in presence of Ravana.

On seeing him Ravana was furious with rage: "O insignificant monkey, who are you? And what business brings you here to get killed! Don't you know that this is the kingdom of Ravana where people like you have no place to live?"

Hanuman replied: "O proud King, how false is your claim! Till I am protected by Rama no one on this earth can injure me in the least, let alone kill me. But I will tell you who I am. Sri Rama has sent me here. He had told me to give this message to save your life by releasing Sita without any delay. It will be beneficial to you and your people. Otherwise the punishment Rama would bestow upon you will be of total annihilation! Be warned and heed this warning."

On hearing these arrogant words, Ravana was hurt to the core. He was furious that this monkey in the name of Rama had audacity to threaten him. Hence he ordered his minister to kill Hanuman on the spot. At this juncture, Vibhishana rose from his seat and politely said to Ravana:

"O mighty brother, have you forgotten the rules of treating the ambassador? What has happened to your intellect and reason that such a simple custom of honouring a messenger is lost on you. I request you to release Hanuman at most with a warning to leave Lanka and never to come back. Next time, if he is caught he may be punished more severely."

"And O mighty King", continued Vibhishana "It does not befit you to keep defenseless Sita under arrest. I support Hanuman's appeal to release her instantly with honour and dignity." At this, Ravana called Vibhishana a traitor and injured him by hitting him with his foot. Thus Vibhishana was gravely insulted by Ravana; and therefore, mentally Vibhishana resolved to join Rama in the war against his own brother.

Ravana meanwhile turned to his ministers and said, "Ok. Do not kill this monkey, but teach him a lesson for creating the nuisance in Lanka. Tie a long cloth to his most lovable tail and put it to fire."

As ordered, the servants brought huge length of cotton cloth and tied it to the tail of Hanuman. Fire was applied to it. Hanuman by his special power increased the length of his tail by many many yards and started jumping here and there! He ran all around Lanka and in this process set most of the houses on fire! Hanuman was not hurt at all. Rama was there to take his care! At last Hanuman jumped in the waters of ocean and decided to return to his friends on the other side of the sea.