Rama had sent Laxmana to face Indrajeet to make the Brahmastra ineffective. Laxmana alone was capable of sustaining its impact; any other person was sure to die. As that missile could be used only once, Indrajeet became helpless. Now Rama decided to come in picture.

Next day, Indrajeet came to fight with Rama. The clash of weapons, noisy fights, and destruction all around made the battle ground the last desirable place to stay in. But show must go on! The illusory forms that Indrajeet took, made him a difficult target to hit. At times he would appear on the right, at others to the left, and at times he would fight even as floating in the sky. But Rama put an end to all his Mayawi warfare and killed him with one special arrow. 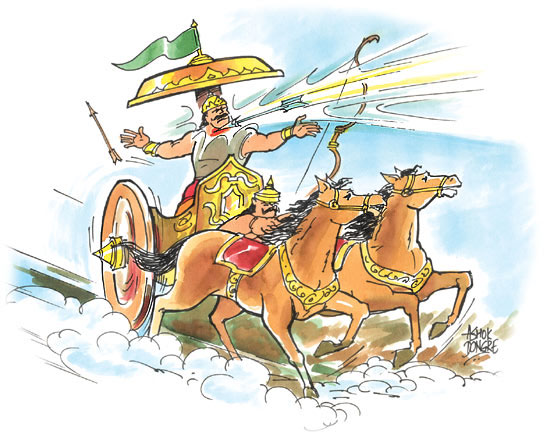 The victory cry in Rama's camp contrasted sharply with the hush in Ravana's court. The news of fall of their beloved son caused immense pain in the heart of father Ravana and mother Mandodari. Both of them rushed to battle field, took the body of Indrajeet in their lap, and cried like any other parents. Their grief and suffering brought tears to the eyes their opponents as well.

The last rite of Indrajeet were performed with full honour. Representative of Rama also attended the funeral and offered prayers to the departed soul.

With remorse Mandodari said to Ravana, "O Lord, look what your adamant nature has done. It has taken away our most powerful son in the prime of his youth. I pray to you, O Lord, to free Sita and hand over her to Rama where she rightfully belongs. There is still time to avert further destruction and peril. I do not want to lose you, O my dear husband!"

The pathetic appeal, although reasonable and rational, fell on the deaf ears. Ravana was full of grief at the loss of his son, but his pride did not allow him to see reason. He replied,

"O, queen, do not try to put me in the line of cowards. Do you think I should accept defeat when my son and brother have made such great sacrifices? You speak like the traitor brother Vibhishana who has joined the enemy's camp. Have you lost faith in my power and skill! Listen, come what may, I am determined to continue this fight to its end. Tomorrow you shall see one of the mightiest Kings victorious: either I or Rama!"

Now Ravana decided to put an end to the war. He went to the temple of his chosen deity -Lord Shiva, and prayed and meditated for whole night. There was grace and serenity on the face of Ravana. Next day he was to fight with the Master of Universe Himself. He knew his death was near as The Lord had come in the form of Rama to liberate him from the worldly bonds.

Anger, hatred, jealousy, and pride were gradually leaving him, and instead calmness and strength pervaded his whole being. He became conscious of his tremendous powers. All magical or illusory skills, knowledge of special missiles, all grace of an warrior entered his mind, body, and psyche.

The text of Vedas and Scriptures became visible to him. His Mantra flashed in front of his eyes. Lord Shiva appeared in his vision and blessed him. Ravana was to die as he wished, was to be liberated by the Lord Himself.

The sunrise made everyone aware of the reality of the day. The battle between Rama and Ravana was about to be enacted; the battle that would be remembered for centuries to come! The gods in the heaven supplied a beautiful chariot to Rama. They also sent special garlands and robes for Rama and special bow and arrows were offered.

In the morning Rama worshipped his chosen Ideal: Lord Shiva! and embarked on his final mission in his chariot to the battle-field.