Ravana was also ready in his huge chariot. The two armies arrayed themselves in special fronts. Rama and Ravana approached one another and halted at a distance. Conches and trumpets were blown, and the sound generated terror in the hearts of the opponents. Rama and Ravana saluted each other and the last fight began.

Ravana had ten heads which he had obtained as boon for his special worship of God. It also indicated extra intelligence, superhuman strength, and extra pride. It was also suggestive of long life, every head was compatible with life. Rama and Ravana hurled missiles at each other. Both were able to counter opponents attacks. When one head of Ravana rolled down, it was replaced by new one! If one arm of Ravana was cut, it was replaced by another! It was impossible to kill this powerful Rakshasa (demon). 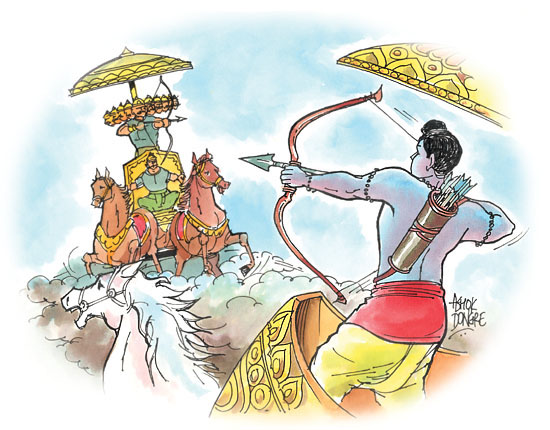 Then Rama destroyed Ravana's chariot. But, instead of falling on ground Ravana flew high in the sky and started attacking Rama and his men with arrows and maces, and dropped magical fire and stones. Moreover, he took multiple forms to terrorize Rama's army. Some forms were having only head, while others were composed of trunks only! This "Mayawi Yuddha" -- Illusory War-- posed additional pressure on Rama to select the original Ravana and hit him. The energy was drained out from the tiring army men. Arrows and missiles made no impact on Ravana in the least. Many of the monkeys and bears from Rama's army were disheartened. They were tired and many tried to escape the rain of arrows and fire being poured by Ravana. Rama protected all his men by counter attacks and by providing special cover against Ravana's attacks.

Laxmana, Hanuman, Angad, Sugreeva, and Jambuwanta all tried their own missiles on mighty Ravana but in vain. When the arrow of Rama failed how could any other succeed!

The day turned into night, and both the armies retreated to their respective camps. The injured were treated with potions and ointments. Rama and Laxmana with their associates discussed the way and means to put an end to Ravana. But no definite answer could be had as Ravana was adept in this kind of war games. Moreover, he had the capacity to regenerate any lost part of the body. Death of Ravana was difficult to imagine!

However, Vibhishana remembered something about his brother -Ravana - that had a great bearing on the outcome of war. He recalled how he once had faintly overheard the weakness in the body of Ravana -- and that weak spot was his umbilicus (middle abdominal region), not head, nor heart, nor neck! If Rama could hit the arrowhead in that localized spot, the life-sustaining nectar would spill and Ravana was sure to die.

Thus, armed with the special knowledge, next day, Rama put an end to Ravana's life with the arrow in his naval. The mightiest king on the earth fell. This brought to an end clanging of weapons and associated bitterness and ill feelings. The injured Ravana was counting his last breaths. Mandodari came rushing to her injured husband with eyes full of tears and heart filled with unexplainable pathos. Rama went to her consoled the lady with soft words of sympathy. He also gave her advice about the impermanence of life and reality of death as the only truth after birth. He proclaim to her and all the people around that Ravana will be remembered for eternity for his good as well as bad deeds.

Then turning to Laxmana Rama said, "O dear brother, look the mighty Ravana is lying on his death bed. His knowledge of Vedas and Scripture is beyond doubt. But equally true is the fact that you will not find more knowledgeable authority on politics, statesmanship, and sociology on the earth today. Please go and get the knowledge from him."

Thus Laxmana, sitting at the feet of Ravana, learnt many useful things on diplomacy, politics, tax structure, social reforms, war preparedness and many more from him. When Ravana breathed his last, Rama himself conducted the last rites befitting the grandeur of Brahmin Rakshasa King. Thus one important aspect of the Divine Play - LEELA - enacted by the Lord came to an end.

Ravana and Hanuman, Laxmana and Sita, Sugreeva and Jambuwanta, (and all others) were but the actors playing their allotted or designated role. Nobody is all evil, nobody is all good! The human form by necessity brings weaknesses to the human character. Some appear sinner, some saint!