Celebrating the Birth of Rice

Continued from "A Birthday Extraordinary" 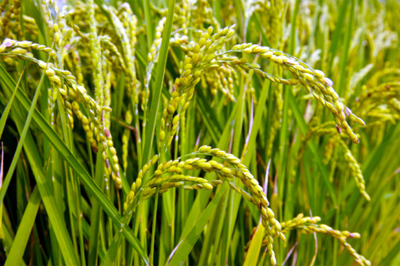 Makam, considered to be the most auspicious asterism for the birth of a girl, means fortune, happiness, wealth and charity. True to this, the saying goes Makam piranna manka.  May the maid, born on makam (asterism), come out from the granary, is yet another common rhyme in Travancore. To understand its meaning, one should bear in mind the fact that the makam asterism is the birthday of rice. There live in our midst people who have cultivated rice till half a century ago with nostalgic memories of their participation in the celebration of this festival every year.

On this day, the karanavar or the head of the family or maternal uncle or a maiden born under the makam asterism, wearing a ceremonial dress after a ritual bath, gathers seven grains of rice, collected from the pathway, fallen from the sheaf of harvested rice, carried home on head from the fields.  To pick up grain from a harvested field after reaping or cropping is kaalayi/ kaala perukkuka. The rice grain thus gleaned after reaping is irumani a handful of rice called talpidi.

Of the seven grains gleaned, they throw over one at the place from where it was picked up and another at the conduit through which water is let into the field or in the household well where it was given a ceremonial bath. There may be pest destroyed corn or chaff among the collected grains. Throwing away such grains in these two places assures the remaining five grains to be free from chaff.

Adorned with sacred ashes, sandal paste, kumkum, these five grains are reverentially seated on a pure cloth kept on a sacred platter (talam). After offering flowers on the lighted lamp on this talam, the same is taken to the thekkepura of the traditional houses to the accompaniment of ululu in chorus by the household women. Burning incenses will then purify the air in the room. It is one of the acts of homage in the dasopacharam.

Erection and consecration of an idol is pratishta. Here the soul is conferred on the grain and this ritual act is called adhivasam. Details of this ritual look similar to those of the dhaanyaadhivasam, jalaadhivaasam, ratnaadhivaasam and are related to idol worship. Adhivaasana is causing divinity to dwell in an image.  “In many practices within the kshetram ritual, the actual idol is treated in a human way - it is bathed, oiled, fed, and decorated. The setting and architecture of the Kerala temple - simple and house-like structures surrounded by paddy fields and coconut groves - support this.”

On makam being believed to be the birthday of rice, the rice grain assumes importance and  is worshipped that day. No one will till or plough the land, boil paddy or barter/ trade in rice on that day. Rice soaked in milk is the favourite of the goddess. On full moon day, this palchor is an important offering at the Devi temples. The household women in a state of purity cooked this payasam in the domestic kitchen, a feast with jaggery, rice, coconut, turmeric and a pinch of salt and served it to the agricultural labourers and other household members.  The paddy grain enjoyed a complete rest on that day. The procession of Goddess Saraswathi from Padmanabhapuram palace to Thiruvananthapuram begins on the makam asterism. The Navaratri festival starts on makam day with puja of yoke and rice grains, and culminates in vidyarambham.  This celebration honouring rice on the asterism of makam in southern Travancore made it a unique ritual found nowhere else.

We have seen the deification of rice seeds gleaned on the makam asterism in the month of Kanni, from the pathway from the harvested field leading to the tarawad house of the peasant. We see, on that day, the rice goddess becoming the object of worship by the agriculturists from all over Kerala.

A ritual practised all over Kerala

Rituals, the results of the cultural combination of the entire community, are inherited from forefather beliefs. In an observation made in the recent past, at Vilappil Sala and in the neighborhood of Neyyar Dam, both in the vicinity of Trivandrum, this celebration can be found as a ritual inherited from forefathers. While the agriculturists in northern Kerala gave emphasis to dhanyasamriddhi, their counterparts in the southern part observed this day as the birthday of rice.

Gourikutty Amma's Kannampalli house at Vilappil Sala, approximately 500 years old, bears testimony to a matriarchal family. On the morning of the makam day in the month of Kanni, she goes to glean seven paddy seeds from the field after harvest and gives it a ceremonial bath. After mounting the seeds one by one, on seven leaves of the Kanjiram tree, after giving them a ceremonial wash, she keeps all the leaves at the door step of the thekkeppura. They abstain from cooking rice that day. Normally elders did this ritual. In their absence, Gourikutty, the youngest of all, got chances to observe this ritual herself. As there are no rice fields in the vicinity, the birthday ritual is seldom observed these days, she laments.

Kanjiram (Strychnos Nux Vomica) is worshipped by many born on the asterism Aswathi as a tree associated with their star of birth/ janma nakshatra. Even today, this tree is planted in traditional houses near the family temple for use only for building temples. Kanjiram is associated with rice cultivation, as the plough and granary are made of this wood. Its leaves are given importance in many a rice-based rituals, including illam nira.

Velam Vilakam, Gopinathan Nair’s tarawad, situated on the way to Neyyar Dam is older in look than the Kannampally House. We see lions housed in museums these days. When the Neyyar Dam was a forest area till recently, in the midst of forest animals, men lived in this house as caged men- a house surrounded by railings and bars. This courtyard house remains as a proto-type of nalukettu houses of the recent past.

Gopinathan Nair explained how he observed the ritual of rice’s birthday. There may be grains of the rice in the pathway, fallen from the ear of paddy carried on head from a paddy field to a yard to keep sheaves of paddy. He collects some grain, not less than ten, from this pathway convenient to him, irrespective of which paddy field it belongs. Then he gives it a ritual bath in a brook. He throws away chaffs at this place, to reduce its numbers to strictly seven. Securing these seven grains of paddy on a plate-like plantain leaf he carries home, as a burden on his head. On a plank used as a seat, oriented towards the rising sun, he erects the plantain leaf with the grains. After marking all the grains with sacred ashes, sandal paste and kumkum, he performs oblations with flower soaked in water, from the spouted vessel. Once his family members perform their worship of the grains placed in the front yard of the house, he carries the grains in the plantain leaf along with the plank to the interior ara for further worship.

Along with the custom of rice cultivation, they inherited this ritual from their elders. The elders performed the ritual as the birthday of rice. Eighty-six-year old Gopinathan Nair nearly grumbled when he said that the former rice fields ceased to cultivate rice at all. This made it difficult for him to proceed with the ritual bequeathed to him by his forefathers.

Is an ever-burning lamp destined to burn out?

A lamp kept burning perpetually or for a fixed period of time is ketaa vilakku/ poliyaavilakku. A light that burns continuously, uninterruptedly, is akhanda jyoti. This unfading, perennial lamp may lose lustre, and wither away. The rice ritual celebrating its birth seems to languish in places whereever it was found in wide practice. Is the ritual destined to pine away as people stop to cultivate rice?

A heap of corn thrashed but not winnowed is poli. Prosperity is polima/ polippam. Plentifulness is being fully as much as one needs or desires. It is abundance and prosperity (samridhi). Increase in grain output is dhaanyavardhanam, an indication of prosperity. Grain heaped after measuring indicates increase, and is called polikkuka. To measure corn heaps, paying reapers in kind is polikka. The word poliyuka means increase/ shine. It also means to be extinguished. Increase in grain output is a lamp that always burning. Prosperity and increase (samridhi and vardhana) are polima. It also means destruction. Polippu means increase, and destruction. This word is a two sided coin with opposite meaning. The word polivu means increase, beauty, it also means destruction. It seems destruction is inbuilt in this word. Extreme want of resources or the means of subsistence is destitution, aripriyam in Malayalam. It is scarcity of grain. In such a situation how one can look forward to keep burning the flame of the lamp that remained to burn always. The situation has put out the flame. Do the always burning lamp destined to be extinguished? Is this perennial lamp is burning out? We see Gopinathan Nair saying that it is immaterial from which field or pathway the grain is collected for the worship. In order to perpetuate the ritual shall we collect seven seeds from a pathway far away form one’s tarawad say from our neighbouring Tamilnadu state.

A. Sreedhara Menon, who considers this festival as “a very rare and strange observance” testifies that “it is not found elsewhere in Kerala.”  This shows that the ritual has obviously hidden from the view of the historian for a long time. In fact, it is not limited to the north and has spread throughout Kerala including the Kanyakumari district, once a part of the erstwhile Travancore. The Nanchinadu area was considered as the granary of Travancore, where the observance of this ritual has a deeper meaning. Sankaran Nair in his book Nellum sanskrithiyum held that in the absence of historical documents the ritual may be regarded as a fable or a myth says.

The negligence on the part of historians to chronicle this ritual has made the historian a flouting stock in historiography. This resulted in keeping an important window closed even in the 21st century. This has cost the ancient history of Kerala not a little. The finding that this ritual was found observed in Palghat and Kanyakumari, the two granaries in the south and north of Kerala respectively and in places in between, speaks volumes.

Seeing beyond a deep rooted ritual

It is apt to recall the observation of Vandana Shiva in this context: ‘Rice must have been cultivated in Kerala from time immemorial. But there is every reason to believe that it became the staple food and its propagation became so extensive only after the domination of the Kerala society by the Brahmins around the 11th century.’