A Symbol of India’s Impotence and Humiliation 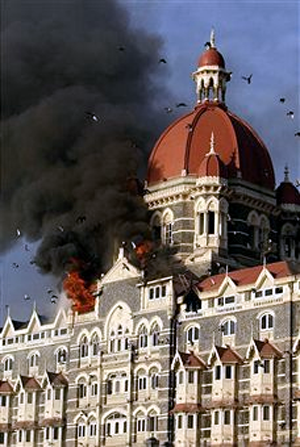 The three day rape of India’s commercial and cultural center, Mumbai by Pakistani terrorists on 26 November, 2008 with Hotel Taj as the main theatre of inflicting horror and fear, wanton destruction and showcasing Indian state’s impotence and total incompetence and inefficiency of its security establishment, in some ways mirrors the destruction of US symbols of economic power in New York’s Trade Towers and damage to its military power’s nerve center, the Pentagon, on 11 September, 2001.

Suppose President Parvez Musharraf of Pakistan had gone to the site of the destroyed towers and made a speech about the resilience and courage of New Yorkers, how would US and its people taken this sermon. After all the hijackers/terrorists, mostly from Saudi Arabia, were trained and financed by those who were either Pakistanis or were their guests and comrades of the Jihad against USSR in Afghanistan in 1980s. The Al Qaida and its host Taliban were created by Pakistan ISI and financed by Washington, Riyadh and others, mostly Muslim countries. Just before 9/11 Taliban were having discussions with UNOCAL, a US oil company for allowing use of Afghanistan territory for laying energy pipelines from central Asia to south Asia.

Thus the choice of Hotel Taj, Mumbai as the venue for the speech of US president Barack Obama was most inappropriate and unfortunate, if not a slap on the face of Mumbaikars who lost friends and relatives and suffered the humiliation of being made to witness the City’s rape. How could a feckless Indian administration and Indians agree to it?

“India disappointed that the name of David Headley was not provided (by US), if not pre-26/11 at least post 26/11”, Indian Home Secretary GK Pillai, (Headley visited India in March 2009. New Delhi could have nabbed him).

But the Indian worm was not even allowed to turn. Next day the US ambassador contradicted Pillai’s statement. Soon after his boss Home Minister Chidambaram and others were disowning the truth about FBI’s complicity in 2611 so evident because of the involvement of its agent David Goldman Headley. What else is arm twisting!

But to allow Obama to make an otiose speech at the Taj was a most thoughtless decision. What happened to thousands of Mumbaikars who held TV discussions, seminars, candlelit sit outs after 26/11? No brave souls showing a black flag or two.

It was very clear that Washington ought to have had advance info about 26/11 since with 70% of allies’ war material for Afghanistan being sent up from the Karachi port, the place is crawling with FBI and other agents. US has unmatched control over communications in the region. So to believe that US did not have precise details of preparations and even departure of ISI trained terrorists towards Mumbai is to live in a fool’s paradise. The revelations by Headley only confirmed the author’s suspicions held since 26/11, which damaged India’s reputation and brand equity, much to Beijing’s delight.

There is a litany of examples how Washington has misled and even deceived friends and allies when its interests are involved. You do not need testimony from FBI agent David Goldman Headley’s scorned and estranged 27 years old Moroccan wife Faiza Outalha who was told to "Get lost" by the US officials in Islamabad when she told him a year before 26/11 that Headley was planning a terror attack in India with the help of the Lashkar-e-Tayiba.

"I told them, he's either a terrorist, or he's working for you," she recalled claiming that she showed them photos of Headley and her stay, twice, at the Taj Mahal Hotel (confirmed by hotel records)

A senior US official confirmed Outalha's meeting but gave no details of her warnings. In a statement, National Security Council spokesman Mike Hammer stonewalled that "The United States regularly provided threat information to Indian officials in 2008 before the attacks in Mumbai.”  “Had we known about the timing and other specifics related to the Mumbai attacks, we would have immediately shared those details with the government of India," Hammer added.

The revelations came after a recent report by ProPublica followed by New York Times and The Washington Post that the FBI had been warned about Headley’s terrorist ties a year before the Mumbai attacks. It was pointed out that "despite those warnings by two of his three wives, Headley roamed far and wide on Lashkar's behalf." Despite a federal inquiry into the tip, Headley spent the next four years doing terrorist reconnaissance around the world. Between 2006 and 2009, he came on five spying missions to Mumbai, one after 26/11 scouting targets for the attack by Lashkar that killed 166 people, including six Americans.

As for 9/11, most Muslims believe that it was a false flag operation. The number of US citizens to this viewpoint is on the increase with a large body of evidence to support it. The author believes that powers that be in US knew about it and allowed it to happen, so that Washington could use it like Pearl Harbor before US entered the WWII. It is now clear that Bush administration insiders had plans to invade Iraq for its oil and Afghanistan for strategic control of the region even before Bush was sworn in as the President.

PS. The author witnessed with some amusement and disdain on 6 November the daylong coverage of the Obama‘s first day in Mumbai on India’s corporate channels with the usual suspects toeing the correct line, barring a few like retired defense officers, Sidhharath Vardarajan, Brahma Chellany (he was not allowed sometimes to even complete his sentences on NDTV a la CNN, who do the same with inconvenient facts).