Tattoos from Rustics to Academics

The art of Tattoo has been around for thousands of years. The styles and reasons for tattoo have varied from individual to individual as they have from society to society. Some tattoos were prepared for simple ornamentation, others done for religious beliefs and others still for reasons known better to their wearers. Tattooing has existed in one form or another across the earth since time immemorial and the popularity of tattoo art is most likely to continue for centuries. Though the fundamental concept of tattoo has been constant throughout the history, the styles and reasons for tattoo have evolved along with man's own development.

Gone too are the preconceptions about tattoos. In recent years, the tattoo is enjoying something of a renaissance. The reason for this has a lot to do with the improvements in tattoo technology; this has enabled real artists to make real their designs, where as before it was quite difficult to transfer what was in ones mind, to ones body. Now it is most common for the very best tattooists to have formal fine art or technical art qualifications.

In prehistoric times, tattooing was prevalent in many lands. Tattooing has been a Eurasian practice since Neolithic times. "Ötzi the Iceman", dated circa 3300 BC, exhibits therapeutic tattoo (small parallel dashes along lumbar and on the legs). In the Steppes, other natural mummies up to 7000 years old have been found to have tattoos. The Tarim Basin (West China, Xingjian Province) revealed several tattooed mummies of a European physical type. 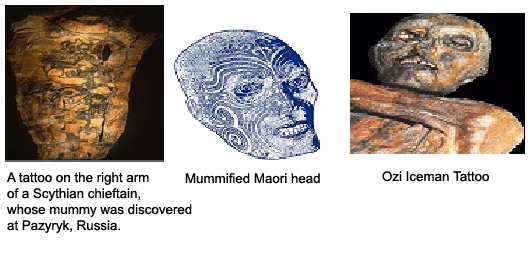 Three tattooed mummies (c. 300 BC) were extracted from the permafrost of Altai Mountains in second half of the 20th century (the Man of Payzyrk, during the forties; one female mummy and one male in Ukok plateau, during the nineties). Their tattooing involves animal designs repertory carried out in a curvilinear style. The Man of Pazyryk was also tattooed with therapeutic dots lined up along the spinal column (lumbar region) and around the right ankle.

Tattoos in Egypt can be found as early as before the Pyramids were made.

The art of Tattoo has been around for thousands of years.

Health tattoos are common in Tibet, where people tattoo their bodies with sacred mantras, mantra wheels and mantra flags, of gods on the distressed person so that the person recovers by the blessings of gods.

Ainu women tattooing themselves to look like goddesses so that the evil forces of disease would mistake them for goddesses and run away.

We can find the therapeutic character of tattoos already in connection with Frozen Fred (Ötzi) and in Samoa it is known as medicine against rheumatism or against head-ache: in Africa tattoos are supposed to be more effective than medicine.

In India tattooing for health purposes is very popular since time immemorial. We often see the tattoo of lord Hanuman and Shiva.

Such tattooing rituals are performed by Maori girls, who tattoo their lips and chin. Old Ainu ladies re-tattoo their hands and mouths to get back the falling eyesight.

The Tattoo Has its Origin in Body Painting.

Probably it has been detected incidentally and used to decorate bodies. These paintings can be found even earlier than rock-paintings.

In Africa and Melanesia we find the magical purpose of bodypainting in connection with sorrow (with white clay), in the facial paintings of the Eskimos who were whaling in the Bering Sea, at youth initial ceremonies or in Australia: in connection with obsequies with black, red or yellow colour.

The war paint of the North and South American Indians has beside deterrence also magic power. Many tribes (e.g. in Indonesia) rub the colour in the soared skin – tattoos.

The so called scar tattoo is the earliest form of bringing colour in and under the skin., as protection against infections wounds were rubbed with additives to ameliorate the healing process. Later scars were treated with soot or with colours made of plant sap. The permanent ripping of the scars retarded the healing and intensified the effect.

Coloured threads were sewed under the skin: that was a characteristic of the Eskimos! It was an early form of the wedding ring – to show the belonging of the wife to her husband. In 1578 the arctic inquirer Sir Martin Frodisher saw a female Eskimo with such marks.

The social status of the chieftain or the warriors was clearly recognizable. Individual signs on the body were often identical with the symbols on the property of the carrier, for example on pots or weapons. Tattoos depended on tribes and environments and were a part of the carrier's personality.

In earlier periods the motives were often abstract, for example symbols like lines, points or simple geometric forms. Later the motives became more and more graphical. Fishermen, for example had dolphin tattoos on their bodies to be protected against shark attacks.

Forms, techniques, patterns and the intensity of the painting determine certain situations and events. There are also colours that are characteristic for families.

Body painting has a great importance in the Indian culture. It was the measure of appreciation within a group. It gave information about man's merits in war and hunting. The colour red was the colour of war and a symbol of success, whereas the colour blue was a symbol of difficulties and defeat.

Protective amulets and such magical applications are closely linked to religious beliefs.

Iraqis commonly tattoo a dot at the end of a child's nose to guard against illness.

A tattoo of Hanuman is used to relieve pain among Hindus. Even Indian divinities carried tattoos. It seems Vishnu drew a tattoo on the hand of his wife Laskhmi for protection.

Aborigines in Australia believe tattoos on their arms allow them to dodge boomerangs.

Soldiers in Burma tattoo their thighs to be invulnerable in war.

Cambodian men cover themselves in tattoos to make themselves impervious to harm, even from bullets.

Sacred Buddhist texts are a favorite tattoo in Thailand, where they are believed to have magical power. In an initiation rite known as the "Krob Kru," the devotee lights incense and pray in preparation. The tattoo artist uses a special rod to inscribe the sacred text on the chest, back or arms. A shaman then tests the tattoo's potency by giving each tattoo three or four strong swipes of a sword. Tattoo recipients often enter a state of ecstasy or burst into violent trances.

The snake clan of Pakokku, Burma, has made a science of protection tattoos. No member has ever been killed by a snake. Their secret is the tattoo.

Many Hawaiians adorn themselves with special tattoos honoring their 'aumakua. A tattooed row of dots around the ankle, considered a charm against sharks.

Distinctive tattoos with the name "Ram" repeated in Sanskrit on practically every inch of skin, even on the tongue and inside the lips of Ramnaamis.

The Hawaiians are prominent among people who have specific tattoo gods. In Hawaii, the images of the tattoo gods are kept in the temples of tattoo priests. Each tattoo session begins with a prayer to the tattoo gods that the operation might not cause death, that the wounds might heal soon, and that the designs might be handsome. Many modern American tattooists will tell you, "When you should get a tattoo, the tattoo god will tell you that it is time."

Japan used tattoos for religious purposes and other ceremonial purposes. The tattoos of Japan were prepared by the women of Borneo. The women of Borneo were the first to use tattoos to denote the status and place in life of the owner of the tattoo.

Adivasis of Madhya Pradesh in India- the Chirlya (bird) mark must be borne by a Bhil woman prior to her marriage and is always tattooed at the side angles of the eyes.

Tattooing after marriage is not regarded as auspicious. Symbolic confirmation of their group codes. Every member tries to be with the group. Tattooing gives feeling of security. There is a belief among the Bhils that the figures drawn on the body are the evidence of good deeds which go with a person to his post-mortem existence.

In the Bundelkhand region amongst the rural people there is a saying that whereas all other ornaments of a woman are taken off when she dies, tattoo marks are her only fortune she carries to the next world.

A male dancer always takes care to decorate his body with white and red stripes to give the impression of a tiger. The Muria dancer prefers to paints the rows of dots to look like a panther.

In India tattoos were used to express deep sorrow. The deeper the sorrow the greater the self-mutilation. The physical pain should help people to get over the mental agony. In India even teeth were pulled out.

In Papua New Guinea still today women cut off a finger-joint every time a member of their family dies – except the thumb. Some women have totally mutilated hands – whereas men don't do this at all!

In Africa some tribes tried to determine the sex of a child during the pregnancy with the help of tattoos and to protect the unborn child against demons. 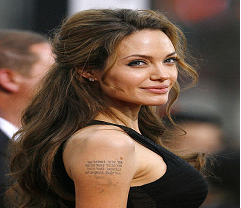 Everyone, from basketball stars to boxers and wrestlers, seems bitten by the tattoo bug. In a survey, conducted by the Associated Press, it was found that more than 35% of all NBA players had tattoos on their bodies.

Through tattoos marked over their bodies, criminals show their allegiance to their respective gangs. It is interesting to note that many times criminal tattoos record the wearer's personal skills, specialties, accomplishments and convictions. Certain Criminal tattoos have developed recognized coded meanings.

In Japan (between 300-600AD), tattoos were put on criminals as mark of punishment.

In ancient Rome also they followed the same pattern by tattooing slaves with slogans such as "I am a slave who has run away from his master".

Russian Criminal Tattoos Like in other countries there is a mania for tattoos among criminals, but in Russia they give much more sense for those signs on their bodies. Each even smallest detail can be interpreted as a biography verse from the life of tattoo owner, both police and criminals can just look at the body of the tattooed person and tell all his deeds.

Russian criminal tattoos have a complex system of symbols which can give quite detailed information about the wearer. Not only do the symbols carry meaning but the area of the body on which they are placed may be meaningful too.

The initiation tattoo of a new gang member is usually placed on the chest and may incorporate a rose. A rose on the chest is also used within the Russian Mafia. Wearing false or unearned tattoos is punishable by death in the criminal underworld.

Tattoos done in a Russian prison have a distinct bluish color and usually appear somewhat blurred because of the lack of instruments to draw fine lines. The ink is often created from burning the heel of a shoe and mixing the soot with urine.

In addition to voluntary tattooing, tattoos are used to stigmatize and punish individuals within the criminal society. They may be placed on an individual, who fails to pay debts in card games, or otherwise breaks the criminal code, and often have very blatant sexual images, embarrassing the wearer. The victim of a forcibly applied tattoo is nevertheless required to pay the tattoo artist for his work.

Other Uses of Tattoo 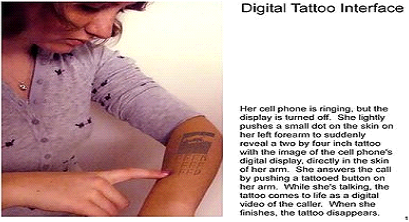 The Greeks used the tattoos primarily to transmit messages between their spies.

Continued to : Tattoos in Literature