The conclusion of Michelangelo Antonioni's trilogy on modern malaise (Preceded by L'Avventura and La Notte ), L'eclisse (The Eclipse) tells the story of a young woman (Monica Vitti) who leaves one lover (Francisco Rabal) only to drift into a relationship with another (Alain Delon). Using the architecture of Rome as a backdrop for the couple's doomed affair, Antonioni reaches the apotheosis of his modernist style, returning to his favorite themes: alienation and the difficulty of finding connections in an increasingly mechanized world. Eclipse won the Special Jury Prize at the 1962 Cannes Film Festival and was nominated for the Palme d'Or.

At dawn on Monday July 10, 1961, a young literary translator, Vittoria (Monica Vitti), breaks off her relationship with Riccardo (Francisco Rabal) in his apartment in the EUR residential district of Rome, following a long night of conversation. Riccardo tries to persuade her to stay, saying he wants to make her happy, but she turns out the lights in his apartment, tells him she no longer loves him, and leaves. As she walks the deserted early-morning streets past the EUR water tower, Riccardo catches up and walks with her through a wooded area to her apartment building where they say their final goodbyes.

Vittoria then makes her first visit to the stock exchange where she gives up connecting with her mother and just watches the action at the hub of materialism, as the happy brokers take advantage of an upswing in the stock market. The target of Antonioni's social criticism is obvious here, especially during the sequence that includes the moment of silence for a deceased colleague-after which the intense hubbub starts again as if nothing has happened-a sequence that would be laughable if it were not so depressing. After making the general social point, the director proceeds to demonstrate the extent to which such greed and such misplaced values affect personal relations. Vittoria's mother, like so many other good middle-class Italians at the peak of the economic boom of early 1960, is out to make a fortune through the stock market, the classic bourgeois instrument of wealth, and she pays little attention to her confused daughter.

It is interesting to note that the sexual and emotional aridity of the highly stylized scene in Ricardo's apartment that opens the film naturally leads to the shouting and brutality of the stock exchange. Sex is there at stock market as well. For example, one broker shows another a photograph of a woman in a bikini and makes sexual puns that equate buying and selling the woman.

Vittoria is unmoved and she visits some friends. Later on when the three girlfriends get together in Marta's apartment to bang drums, dress up in native African costumes, and dance wildly, Vittoria seems more genuinely alive than in any other moment in the film. In the next scene, Victoria reflects: "May be over there (In Africa), they think less about happiness, and things just move forward on their own ...Here, instead everything seems like lot of work. Love too".

Later, she stops at a cafe in Airfield and flies in an airplane. The vistas of clouds and sky momentarily exhilarate her. She goes back to the stock market, which is having a bad day. When the stock market collapses, the frenetic intensity of the moment has unmistakable overtones of sexual intercourse. Vittoria's mother takes a heavy loss, which she blames it as socialist conspiracy. Her broker Piero eventually picks up on Vittoria and they start a casual flirtation. 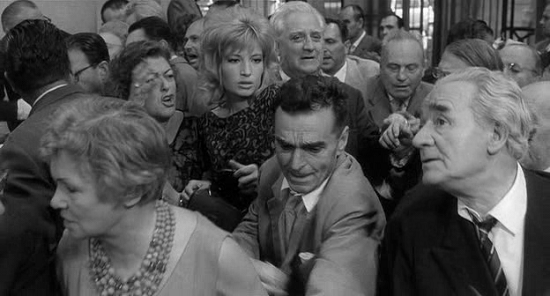 The stock market scene in 'The Eclipse'

The audience's relationship with Piero is emotionally complicated and seems purposely full of contradictions. He is handsome but his utterly mercenary values and his lack of interest in his fellow human beings make him unpalatable at the same time. For one thing, he worries more about the loss of his car than he does about the drunk who was killed while stealing it. Except for a few exceptional moments, Vittoria and Piero's affair has sensation but lacks deeper passions. When they walk together they seem like zombies. He still looks at other women and her attention wanders to other men. Their hands intertwine and play games but only their bodies seem to really get along. 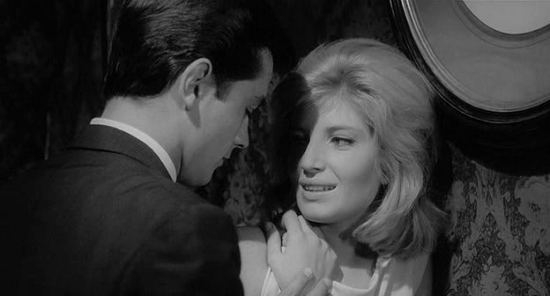 Sometime later, Piero and Vittoria are lying on a hill looking up at the sky. He looks around and says, "I feel like I'm in a foreign country." She says that's how she feels around him. He gets upset when he doesn't understand what she's feeling. She says, "I wish I didn't love you or that I loved you much more." Later at his office, Vittoria and Piero kiss and embrace playfully on the coach, even wrestling on the floor like children. When an alarm goes off, they prepare to part. They embrace and talk of seeing each other every day. They agree to meet that evening at 8:00 pm at the "usual place" near her apartment. That evening, on Sunday September 10, 1961, neither shows up at the appointed meeting place.

It's important to stress how well L'eclisse is put together. This is no empty exercise. Even when the leading character Vittoria is just marking time in her apartment or drifting from one scene to another hoping for something to shake her senses, a keen visual imagination is forever finding new ways to look at a scene. Space is used architecturally and compositions are well organized. The physical relationship between characters and their environment communicate intuitive suggestions - never imposed meanings. Events and objects are exactly what they are. Antonioni's choice of what to show when and how gives us a trail to follow, and even without the barest outline of a plot or even a hint that the movie is going any place in particular, we're hooked. 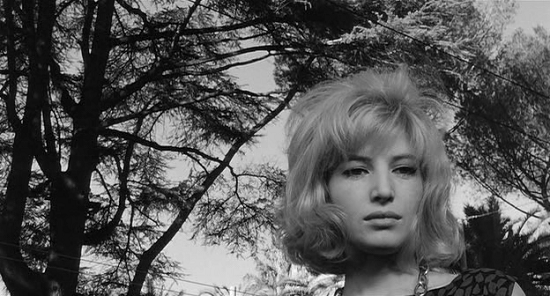 For his conclusion Antonioni pulls a narrative trick that still astounds film theorists. Without so much as a by-your-leave, we just drop our two main characters and return to a neutral street corner where Paulo and Vittoria once spent some time. Construction of a building has apparently been halted mid-way, with the structure swathed in tarps. A rain barrel leaks water into the street. People we've seen on the periphery of previous scenes pass by. The absence of the main characters is not missed by anything in the environment, which goes on 'existing' without them. The screen fractures into a series of visual details, pieces of architecture and bric-a-brac glimpsed as if we were standing on the corner and searching for meaning in the randomness of it all. Night falls. The film ends.